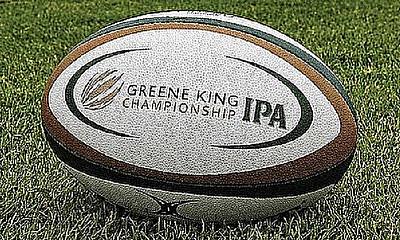 There was a full list of Greene King IPA Championship fixtures over the weekend and TRU Contributor Connor Hickinbottom takes a look at all the action from Round 14.

Jersey left it late as they edged out Richmond in a low-scoring affair.

The game started brightly as Nick Selway went over at the back of powerful driving maul for his 13th try of the season.

Any hope of an end to end game quickly disappeared as the error count increased for both sides.

Rob Kirby slotted a penalty for Richmond, his first of three, but the visitors were unable to add any more points before the break even with a man advantage following Jake Armstrong’s yellow card for taking down a Richmond maul.

There was to be little change in proceedings in the second 40. Both sides struggled to work the ball into attacking opportunities with the weather causing problems.

Richmond added two more penalties through the boot of Kirby to open up a small lead, but it didn’t last long for the visitors as the Reds cranked up the pressure.

Josh Hodson went over in the corner for the Channel Islanders only to have his try ruled out for a forward pass.

But, the hosts got the winner shortly after as replacement scrum-half Kieran Hardy followed up his own charge down to send the Reds up to sixth place.

The Trailfinders extended their unbeaten run to nine-games in all competitions as they triumphed over London Scottish at the Athletic Ground.

Ealing upped the ante ahead of their showdown with Bristol next week; closing the gap between the two sides to just nine points.

The Exiles had scored 10 tries in their previous two Championship outings, but were unable to extend that form as a Jake Sharp penalty in the fifth minute proved to be their only points of the day.

It wasn’t as one-sided as the score line suggests as both sides struggled in the first-half.

A downpour of rain hindered the attacking games of both but despite the weather, Ealing made sure they went in at half-time on top.

Luke Daniels notched a penalty before Alun Walker crossed the whitewash in trademark fashion – powering over from a well worked line-out move.

The Trailfinders finished the half penned in their own half as the Exiles ended positively, but the visitors held strong earning a penalty to deny any possibility of points.

It was plain sailing for Ealing in the second-half. Daniels knocked over his second penalty of the game and minutes later Mark Bright bundled over from close range against his old club. The Trailfinders added a penalty try before time was up with the referee penalising Scottish at the scrum.

Ealing went in search of the all-important bonus point try but to no avail. They will now be hoping to extend their unbeaten run to 10-games next week against Bristol.

The Titans get their first Championship win of the season!

It has been a dismal season up to this point for the Titans. They had lost 13 straight matches in the league but, having recorded back-to-back victories in the British and Irish Cup over the past two weeks, there was slightly more optimism around Clifton Park.

The Pirates must have thought they had the game wrapped up, leading the Titans 24-21 with just three minutes remaining, only for Lee Miller and Caolan Ryan to turn the game on its head with two penalties.

The visitors struck the first blow of the afternoon as Will Cargill slotted a penalty after seven minutes and there must have been many a supporter at Clifton Park thinking it was going to be another miserable afternoon of rugby, but things quickly changed.

So final score Rotherham 27 -24 @CornishPirates1
We have won our first game in the league since I don’t know when. The reaction of the boys shows just what it means to them all. Everyone is on the pitch!!

In the space of three minutes, Rotherham went from 3-0 down to 14-3 up; wingers Will Thomas and Drew Cheshire both crossing the whitewash.

Cornish hit back with a try of their own shortly after as an inch perfect kick from Cargill was collected by Nicolas Coronel who fed Nicolas De Battista for the try.

Rotherham extended their lead further through Ryan. The full-back ensured that all of the Titans’ back-three players recorded tries on the day, giving them a 21-10 lead for the half.

Having spent much of the first-half in control the second-half didn’t go how the Titans would have liked. The Pirates cut the lead down to four through skipper Chris Morgan as the second-row showed a clean pair of heels to score.

The Titans then found themselves down to 14-men as their captain, Tom Calladine, was shown a yellow card. Fortunately for the Titans, their visitors were unable to capitalise during this time, but just after Calladine returned to action, the Pirates got their try as Tom Duncan powered over.

They left it late, but the Titans’ fortune finally changed. Two penalties in the 77th and 79th minute from Miller and Ryan secured a memorable victory for the South Yorkshire outfit as they kept their dreams of staying in the Championship alive at least for another week.

Bristol had their first real scare of the season as they came from behind to beat Bedford Blues.

The Blues went after Bristol from the off, showing the league leaders no respect as they threw caution to the wind.

Their tenacity was rewarded almost instantly as the visitors earned a penalty which they put into the corner and Bristol’s Chris Vui was sent for a 10 minute spell in the sin-bin.

Bedford ramped up the pressure and after several bites at the cherry; Dean Adamson went over for a converted try. The sides then traded penalties with Bedford’s lead increasing to 10-3.

It was all Bedford up until this point with Bristol looking far from their best, but you can’t count the league leaders out and they were back in the game in an instant.

Lee Dickson’s attempted kick was blocked and then the bounce fooled Chris Czekaj which allowed Luke Morahan to collect for an unconverted try.

The Blues responded with a penalty from Will Hooley to give them a cushion of five points going into the half.

It continued to be a rather equal affair in the second-half. The Blues were dominating in the scrum, but now found themselves struggling elsewhere.

With mistakes creeping into Bedford’s gam, Bristol turned on the pressure and were rewarded with a penalty which Ian Madigan dispatched.

Bristol now found themselves in the ascendancy and it seemed certain a try was on its way. The hosts continued to knock on the door and the score eventually came from Nick Haining out the back of a scrum. The back-rower left Ashton Gate the hero with his try proving to be the difference.

This extended Bristol’s unbeaten streak to 14 games but their lead has now dropped to nine-points.

The Knights dominated proceedings at Lady Bay to earn their first bonus-point victory of 2018.

It was back to business for the Knights who were clinical with their chances from the off, taking just three minutes to put points on the board.

Jack Ram seized a loose lineout ball and was stopped just short of the line. The ball was quickly worked out wide for veteran prop Colin Quigley who rolled back the years to finish in the corner.

Donny were quick to extend their lead. From another lineout, the Knights pushed forward opening space down the left-hand side which Matt Challinor took full advantage of as the big second-row powered his way over.

FINAL SCORE | @NottinghamRugby 6-27 #Knights - Clinical display from the Knights who will take all 5? points back to Castle Park with no tries conceded! #COYK

Nottingham were off the mark shortly after as fly-half Tiff Eden slotted a penalty.

The Knights forwards were beginning to dominate proceedings as they once again found success from a line-out, adding more woe to Nottingham’s day. Donny were awarded a penalty try as Jordan Coughlan cynically dropped the Knights catch and drive and the flanker was sent to the sin-bin for 10 minutes for his effort.

The Green and Whites came out firing in the second-half and quickly added another penalty through Eden, but for all their efforts this was as good as it was going to get.

Doncaster wrapped up the bonus point victory in the 74th minute and unsurprisingly it came from the Knights set piece. Ben Hunter took the spoils on this occasion as the hooker went over at the back of another driving maul.

Yorkshire Carnegie rounded off a fantastic weekend for Yorkshire rugby as they earned a hard-fought victory over Hartpury.

The hosts opened up a 6-0 lead through Alex Davies’ boot only to then spend the rest of the half penned back in their own 22.

Hartpury eventually capitalised through winger Tom Seabrook who raced in for a converted try. James Williams followed up his conversion with a penalty to extend Hartpury’s lead.

The second-half started with more Hartpury dominance. Williams slotted over another penalty to make it 13-6 to the visitors.

Carnegie responded well and determined to continue their unbeaten run, they went back to their bread and butter as Harry Newborn powered over from the back of a driving maul.  Davies converted to level the scores.

A mistake by Carnegie from the restart allowed Williams to kick Hartpury back into the lead, but they were unable to increase this lead any further.

The hosts dug deep searching for a winner and it was a moment of magic which provided the score.

Davies started the move in his own half linking up with Stevie McColl who in turn found George Watkins. He raced up field before giving the ball back to his fellow winger McColl to grab the winner.

This extended Carnegie’s unbeaten run to five games and meant all Yorkshire teams reigned victorious for the first time this season.