The latest from the GK IPA Championship 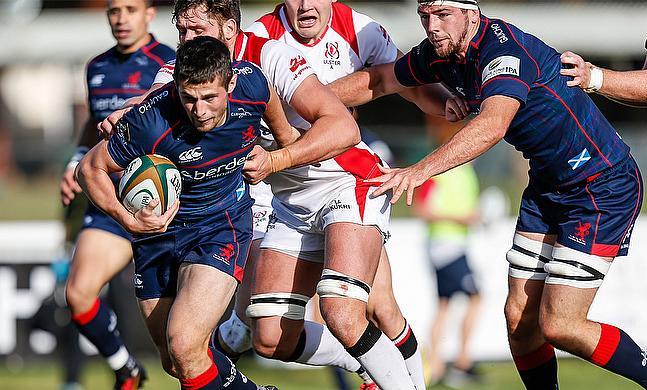 Ahead of this weekend’s fixtures in the GK IPA Championship, TRU Contributor Connor Hickinbottom updates you with each team’s progress as we enter the final month of the year.

Bristol’s dominance over the Greene King IPA Championship continued as they comprehensively dispatched both Yorkshire Carnegie and Nottingham Rugby.

Their journey back to the Aviva Premiership took a big boost after the two bonus point victories, increasing their lead at the top to eight points.

In the two matches Bristol ran in thirteen tries; five against Carnegie and eight against Nottingham.

This extended their unbeaten run to ten games and now they sit eight points in front of second place Ealing Trailfinders ahead of this game with Doncaster on Saturday.

Ealing Trailfinders pursuit of Bristol took a hit as they suffered a last-minute defeat at Nottingham Rugby in Round Nine.

Nottingham’s Tiff Eden slotted a penalty in the 79th minute to secure a memorable win for the Midlands side.

The Green and Whites scored three tries in just thirteen minutes as they opened up a 22-point deficit. The Trailfinders fought back scoring 27 unanswered points and were seconds away from a stunning comeback victory before Eden’s penalty won the game for Nottingham.

The Trailfinders hit back in impressive fashion in their next outing, blasting Doncaster Knights and scoring six tries in the process.

Despite the bonus point victory Ealing are now eight points off Bristol so they will be aiming to keep on the coattails of the league leaders when they visit Hartpury College on Saturday.

Bedford Blues moved to within seven points of Ealing Trailfinders with two impressive performances against Doncaster Knights and Hartpury College.

The Blues left it late against the Knights  as with two minutes left on the clock,  Jordan Burns went over in the corner leaving the responsibility of levelling the game up on Will Hooley’s shoulders. The replacement fly-half slotted the kick to make it all square.

The following week went more to plan for the Blues. They ran in five tries against a struggling Hartpury College side to secure an important bonus point victory.

The Blues are now five points ahead of fourth place Nottingham and can afford to glance upwards to Ealing Trailfinders. Bedford face Cornish Pirates on Sunday.

Bedford Blues have named their team that will be heading off to Penzance to take on @CornishPirates1 this Sunday. Read the full preview at https://t.co/e7JX6xLBGL #COYB pic.twitter.com/LlnLpFM3vb

It was a tale of two weeks for Nottingham as they followed a memorable victory over Ealing Trailfinders with a disappointed loss to Bristol.

A last-minute penalty from Eden Tiff saved a victory over the Trailfinders. The Green and Whites had gone 22-0 up but allowed Ealing back into the game as the Trailfinders. Nottingham took back control in the 79th minute as Tiff stole victory at the death.

Nottingham’s defensive frailties that were shown against Ealing were laid bare in the next game as Bristol ran in eight tries as they blew past them at Ashton Gate.

The Green and Whites sit in fourth place, still stuck in the congested mid table that could see them drop five places with one loss. They will be hoping that won’t be the case when they take on Jersey on Friday night.

Doncaster Knights have had a torrid two weeks. They had victory stolen from them as Bedford Blues drew level with two minutes left on the clock before the Knights travelled down to Ealing and were put to the sword as the Trailfinders stormed past them with eight tries.

The Knights are now winless in five games with their last victory coming on the 30th of September against London Scottish. Despite this, they still sit in fifth place and are just two points off Nottingham in fourth as they take on the league leaders Bristol in Round 11.

Yorkshire Carnegie got themselves back on track this past weekend as they saw off Jersey Reds.

Two tries from prop-forward Marc Thomas in the second-half secured the win for Carnegie, moving them back up to within a point of the Knights in fifth.

Carnegie had lost their previous two outings, conceding forty-four points. These defeats came against the top two – Bristol and Ealing Trailfinders – and next on the agenda for them is a home fixture with Rotherham Titans.

Two changes for Yorkshire Carnegie ahead of derby clashhttps://t.co/55KrUu2Pcg pic.twitter.com/LLjuRPcrRU

Cornish Pirates made up for a disappointing showing against London Scottish with a victory over an in-form Richmond.

The Pirates hadn’t beaten London Scottish at the Athletic Ground since 2011 and they did little to change that statistic. The Exiles ran in five tries to two as they dispatched their visitors.

The Pirates made amends for their mistakes against Richmond, forcing their opposition into being the one to make defensive errors. Richmond saw two players yellow carded as the Pirates controlled the game.

They move up to seventh place, level on points with Yorkshire Carnegie and take on Bedford on Sunday

Richmond’s good run of form came to an end against Cornish Pirates, but things continued to be rosy for the London-based in Round Nine.

Rob Kirby slotted a last-minute penalty against Hartpury College to make it five wins out of six for Richmond.

The amateur side went into their fixture with the Pirates hoping to make that six out of seven but struggled. Defensive mistakes plagued them during the defeat as both Cameron Mitchell and Will Warden were sent to the bin.

Despite their impressive run of form Richmond sit in 8th place, however, one victory could move them above the Knights into 5th place and they will be aiming to do that this weekend when they visit London Scottish.

Hartpury College will be glad to see the back of November as they failed to record a victory throughout the month going on a three-game losing streak.

They were seconds away of securing much-needed points against Richmond but a penalty from Rob Kirby ended those dreams.

After a close encounter with Richmond there would have been hope of going one better against Bedford, unfortunately, this was far from the case as the Blues demolished Hartpury five tries to one.

Hartpury will be hoping December is a better for them and they kick this month of with a home fixture against Ealing.

Here is your Hartpury RFC team that will face high-flying @ealingtfrugby in the @Champrugby tomorrow (2.30pm) pic.twitter.com/M3WWIXt04f

Jersey Reds were the latest team to inflict a heavy defeat on Rotherham Titans.

The Reds smashed past the winless Titans scoring six tries to one, including a hat-trick from winger Tom Pincus.

After such a dominant performance, the Reds faced Yorkshire Carnegie. Unfortunately, lightning would not strike twice as two second-half tries from prop Marc Thomas secured the victory for Carnegie.

The Reds are slowly creeping in on the congested pack in the middle of the table as they sit two points behind Hartpury College in 9th. Jersey face Nottingham on Friday night.

London Scottish are starting to threaten a run of form after winning their previous two outings. Before this the Exiles had not won since the opening day of the season.

The Exiles ran in five tries against the Pirates  in Round Nine, but defensive mistakes allowed a way back into the game for their visitors.

Scottish followed this result up with a narrow victory over the struggling Rotherham Titans. The Exiles stole victory well past the 80th minute as they went through phase after phase refusing to give up. This tenacity was finally rewarded in the 89th minute has the ball was whipped out wide to Craig Holland to finish for a converted try.

These two results see the Exiles level on points with Jersey Reds, closing in on the middle pack and they come up against Richmond this Sunday.

Rotherham Titans’ woes continue as they slumped to another two defeats, making it ten losses from ten games.

Jersey Reds inflicted a heavy defeat on the Titans in Round Nine as the Reds went over six times at Clifton Lane with the hosts managing just one try in retaliation.

Round 10 was the closest the Titans have come all season to victory. They went into the 80th minute leading London Scottish 24-20 but the Exiles refused to give up. Their visitors guile was rewarded in the 89th minute as winger Craig Holland went over in the corner to silence the Titans supporters.

This leaves the Titans well off the pace. They sit dead last with just three points to show for their troubles and they face a tough trip to Yorkshire Carnegie to begin December.