GK IPA Championship Review: Richmond and Ampthill off the mark 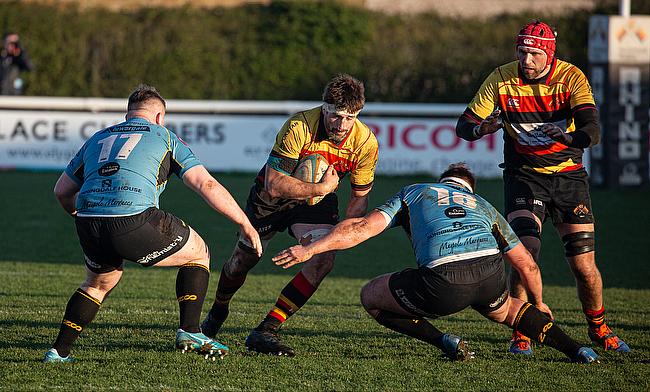 Ealing continue to set a blistering pace at the summit of the GK IPA Championship and the Trailfinders are joined by Cornish Pirates and Doncaster Knights on three wins from three.

Elsewhere, Ampthill and Richmond picked up their first victories of the campaign on another absorbing weekend of Championship action.

Here’s the summary of Round 3:

For the third game on the spin, Ealing put over 50 points on their opponents whilst racking up eight tries. They’ve now scored more five-pointers than the next two best teams put together.

They didn’t have it all their own way against Cov, though, who held them to a 12-12 half-time score before their visitors kicked into gear in the second period.

??After scoring two tries on his way to a Man of the Match performance @ealingtfrugby’s @SUzokwe spoke to TRU.

Want to know what else happened in the West Midlands? Read @joeharvey34’s match report below??https://t.co/csb99WH3H0 pic.twitter.com/GMyaIdKpLo

Friday night’s other match-up saw Hartpury welcome unbeaten Doncaster, who were looking for their best start to a season since 2013/14.

They were ultimately successful in that aim, overcoming their spirited hosts who suffered another defeat.

A lively start to the contest saw Hartpury’s Josh Bragman off target with a penalty attempt before he was then sent to the sin-bin for infringing after a Doncaster break.

From there, the Knights were able to open the scoring as Guidi Volpi went over after an initial rolling maul was repelled.

The rest of the half saw an even exchange of tries between the two sides.

Doncaster extended their lead when Jack Spittle raced over before Robbie Smith intercepted a pass by Sam Olver to cut the deficit.

Spittle led the Knights response by adding a classy second before Olver notched a penalty soon after.

Hartpury had the final say of the half, as Ben Foley won his race with brother Charlie to dive on a kick, leaving Hartpury 22-14 behind.

Olver struck first in the second period with a penalty before Pury again hit back when replacement hooker Will Crane crashed over from a driving lineout. Bragman added the two to put the match back on a knife-edge at 25-21 to Doncaster with 25 to play.

Knights skipper Robin Hislop was shown a yellow card as momentum looked to have swung, but Hartpury could not capitalise.

The game was settled in the final 10 minutes as Calum Waters became the third man sent to the bin, allowing Doncaster to wrap the game and a bonus point up when Ben Hunter scored from the back of a maul.

Saturday’s sole contest ended with Richmond securing a first win since their Championship return against a Jersey side who had to cede home advantage due to ongoing Covid restrictions.

Ted Landry sent a penalty attempt wide for Richmond early on as the opening quarter passed without a score.

Despite the hosts looking the more likely to break that deadlock, Jersey struck first as Brendan Cope picked off a wayward pass to score under the posts, adding the conversion for good measure.

That lead was reduced to a single point by the close of the half, with Landry making no mistake with his next two penalty attempts to leave his side 7-6 down at the break.

WHAT A WIN FOR THE MOND!

Thanks for the great game @jerseyrfc, we're proud to have hosted you here at the RAG today. Safe trip home and good luck for the rest of the season!

Cope took his and Jersey’s tally into double figures with a penalty just minutes into the second half before, in what was the last time the Reds would hold the lead.

Luc Jones bagged against his former club for an immediate response as Richmond edged ahead.

They added another score when Dan Kelly went over, Landry converting both, before adding a penalty just past the hour mark for a commanding 23-10 lead.

Jersey had the final say when George Edson rumbled over in the closing stages, but Richmond had done enough to get their season up and running.

Pirates became the third side to maintain their 100% winning record, eventually outscoring visiting Bedford 5 tries to 2.

Some wayward goalkicking contributed to what may have been a wider margin, but a flurry of tries around the interval ultimately settled this contest.

The Blues were first to trouble the scoreboard operator, following a familiar theme of the weekend as Richard Lane picked up a loose Pirates pass to sprint in from his own half for an early lead.

Dan Frost hit back for Pirates as the hosts looked to gain control and a trio of tries in a 10-minute period before half-time saw Cornish in the driving seat.

Joe Atkinson was sent to the bin for Bedford before Robin Wedlake scored to put Pirates into a lead which was quickly extended with tries from Marlen Walker and Josh Caulfield.

Luke Scully converted at the fourth time of asking for a commanding 22-7 half-time lead.

The result was more or less sealed when Walker secured his brace with half an hour remaining, Will Cargill off target with the conversion which meant a 20-point lead.

Bedford cut that gap when Jacob Fields went over in the final 10 minutes, but that was to be the final scoring action.

The last game of the weekend saw two sides looking to kickstart their season after being heavily beaten last time out.

Ampthill eventually prevailed, pulling away impressively in the second half after a ding-dong opening period.

Nottingham withheld some early pressure before racing into a 10-0 lead. Luke Mehson zipped over after a quick penalty, with Alex Dolly converting before adding a penalty soon after.

The A’s responded through James Flynn before fellow front-rower Dave Ward got in on the action as half time approached. Captain Louis Grimoldby converted both to give Ampthill a 14-10 lead at the break.

They repeated the Flynn-Ward 1-2 combo within 15 minutes of the second half, securing the bonus point and their commanding advantage never looked in danger of slipping.

Will Brown got in on the action scoring Ampthill’s fifth of the afternoon before Nottingham managed a late consolation through Jordan Coughlan to reduce the arrears.