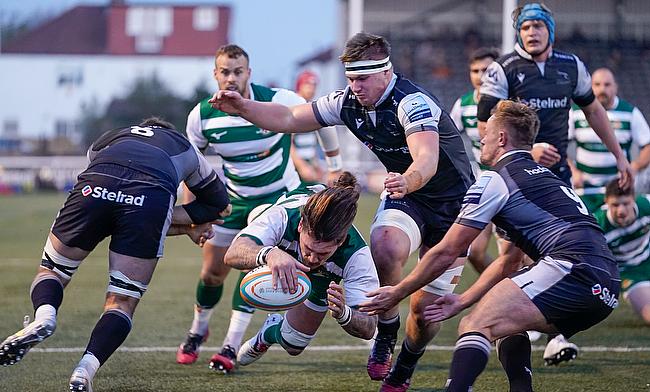 David Ross Exclusive: We talked about being really thankful that we’re back playing rugby at Nottingham
Jackson Wray Exclusive: Targeting the Saracens boys was the easy thing to do
GK IPA Championship Review: Saracens hit back, Ealing irresistible and Pirates & Doncaster march on
GK IPA Championship Preview: Jersey out to upset Saracens in Round Two

Round 3 rolls around with matches across Friday, Saturday and Sunday as the contenders continue to push for a play-off spot.

Ealing Trailfinders, Cornish Pirates and Doncaster Knights are the only three teams who are currently unbeaten and they avoid one another this weekend when they face Coventry, Hartpury and Bedford, respectively.

Elsewhere, the bottom four do battle as Richmond welcome Jersey and Nottingham travel to Ampthill, all looking for their first win of the campaign.

The first fortnight of the season has been gripping and long may that continue. Here’s the briefing ahead of this weekend.

Coventry welcome Ealing to Butts Park to kick off Round 3, a venue where the visitors have come away with victories in each of the past two seasons.

The hosts slipped to a one-point defeat at Doncaster last time out despite a second-half comeback, but they will be aiming to experience some home comforts again this week having lost just once on their own patch in 2019/20.

?? Don’t miss this epic clash and get your stream tickets at https://t.co/QmllMwF3My pic.twitter.com/AkxrHYxGBZ

Ealing, meanwhile, have been rampant in the opening two rounds, racking up 106 points and allowing just nine against to sit pretty at the summit of the table as the only team with a maximum haul thus far.

Both sides have stuck with largely the same line ups as last week, but each have made a pair of changes in the front row, indicating a hotly contested battle up front.

TRU’s Joe Harvey has the honour of attending the game and will be providing coverage throughout on what should be an intriguing encounter.

It’s a similar story in Friday night’s second fixture, as Doncaster travel to Hartpury looking to extend their unbeaten start after two narrow wins so far. As for the hosts, they are aiming to rebound from a defeat on the road.

The Knights have won each of the last four fixtures between the sides, though their Round 1 win at Ampthill brought an end to a run of four successive away losses.

Pury have made several changes to their team as they look to give game time to their substantial playing squad. Despite last week’s loss, only Ealing and Saracens have bettered their tally of eight tries from the first two games.

Donny have done it the hard way with a pair of the narrow wins so far and go in search of opening a season with three straight wins for the first time since 2013/14 when they topped National One. The Yorkshire outfit had made just two changes to the starting XV from round 2.

This is another that’s too hard to call, so don’t be surprised if it goes down to the wire once again.

This match-up serves as the first of the home fixtures which Jersey Reds had to surrender, with both sides looking to kick-start their campaigns.

It is also the first of two contests amongst the current bottom four over the weekend, where they will all be desperate to get off the mark for the season.

Jersey have won their last three against Richmond, including a pair of bonus-point wins in 2018/19 when they were last in the Championship together.

It’s been a tricky start for Richmond with two losses, but they have remained competitive and shown improvements as they grow into their return to the second-tier.

The Reds were well beaten in what was a daunting welcome back to action last week, bearing the full brunt of a resurgent Saracens. Since then, they have loaned Bath pair Max Green and Darren Atkins to bolster the depth in their backline.

Both Richmond and Jersey will be extremely keen to finally re-enter the winner’s circle on Saturday.

A third day of weekend action gets underway as Cornish Pirates return to the Mennaye. They entertain Bedford this time in the only Round 3 match between two sides who won in Round 2.

It’s proven to be a closely fought contest in recent years, with a single point win apiece, a draw and at least a losing bonus for the unlucky side in the last five Blues visits to Penzance.

Pirates have won their last seven home Championship matches, a run which stretches back two years, whilst Bedford have been beaten in their last four away league fixtures.

In fact, they have lost their last 10 on the road against the current crop since winning at Richmond in December 2018.

One of the great home records against notorious away day strugglers, but nothing can be taken for granted in the Championship.

The other two sides making up the bottom four do battle to bring Round 3 to a close and it provides a chance for Ampthill or Nottingham to springboard towards the middle cluster.

Both have had to lick severe wounds recently, with Ampthill snatching defeat from the jaws of victory on the opening day, and each side taking it in turns for 50+ point drubbings at the hands of Ealing.

Nottingham watched on last week thanks to their bye, meaning those heavy defeats to the Trailfinders were the most recent outings for each, something they will want to move on from quickly.

The Green and Whites secured a bonus point victory at Ampthill on the first day of last season, in what was the A’s maiden Championship fixture.

This will provide a long-overdue opportunity at revenge for Ampthill, whilst Nottingham will be looking to repeat the trick and open their account at the same venue.

Saracens take their bye week having responded in style to their shock in Cornwall with a resounding win at home to Jersey, outscoring the Reds seven tries to one in their 45-13 victory.

With the Six Nations drawing to a close, they can expect their England cohort to be back in the mix after this weekend, with Sean Maitland and possibly Duncan Taylor to follow once Scotland’s rearranged game against France concludes their campaign next Friday.

It will be a welcome boost to Sarries, who make the short trip to Richmond in Round 4, looking to build further momentum.