Jackson Wray Exclusive: Targeting the Saracens boys was the easy thing to do 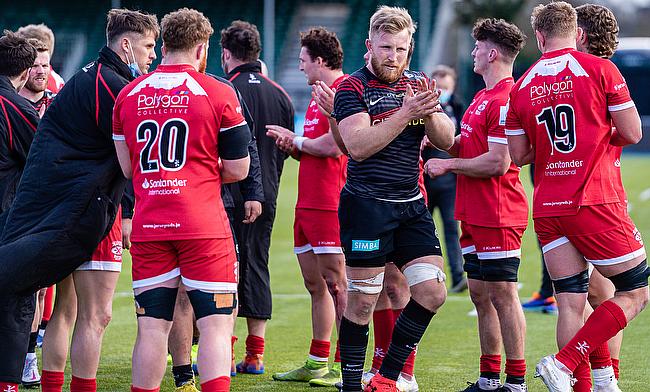 Jackson Wray has very much been a part of Saracens’ rise to the very top of club rugby and now he is helping the side rebuild their way back to the Premiership.

The Championship campaign did not get off to the best of starts two weekends ago, with the Londoners trip to Cornwall ending in defeat. Whilst having 165 caps of experience in their squad, Sarries fell short as Cornish Pirates secured a 25-17 victory over the former European champions.

Now, over a week on from that day at the Mennaye, Wray and his teammates are off the mark in the second tier. Playing Jersey in the Channel Islanders' season opener, Saracens put their opposition to bed in emphatic fashion by securing a 45-13 win.

Captaining his club at the StoneX Stadium, Wray believes the loss in the South-West was beneficial to Saracens: “They (Cornish Pirates) were good on the day," Wray said. "They scrapped hard and we didn’t find some of the solutions we needed fast enough and that was the way it went.

“But this week we were a lot more confrontational, a lot more direct and we want to test teams with that, the speed of our play and our physicality around all aspects, not just our set-piece.

“There was some big improvements, with plenty to work on as well. Around the park, there was some really, really good signs. With the set-piece, we are still progressing, still seeing how to set up and do things in this league because it is different. We are confident moving on and getting better every week.”

?? "It was a realisation that the problems were very fixable. A shift in mentality is what we needed." ??

Hear what Director of Rugby Mark McCall had to say after Saturday's encouraging win. #StrongerTogether ????

Scoring a try and being named Man of the Match in the bonus point victory, it was far from plain sailing for Wray and his teammates against Jersey after visiting fly-half Brendan Cope had opened the scoring with a penalty within two minutes.

But two converted tries from Alex Lewington soon followed, those efforts sandwiching a second Cope penalty. A try each for Elliot Obatoyinbo and Duncan Taylor closed the first half proceedings and the Reds would have no doubt been pleased with their efforts in their first game for a year.

In the second period, Saracens began to press their foot on the throat of the opposition, with Obatoyinbo, Rotimi Segun and Wray all crossing the whitewash. In response, Jersey scored a try through replacement hooker Jack Macfarlane, the 28-year-old pouncing on Sean O’Connor’s charge down.

Still far from the Saracens performance we have become used to over the years, Wray says that not a tremendous amount has changed on a day-to-day basis at Woollams, with the main adjustment for the team coming with their change in division.

“We are still very consistent in a lot of ways,” Wray said. “I suppose the big thing will be certain conditions, referees, other things which maybe we aren’t so used to, but again, those are things we can get better at dealing with, little things around set-piece.

“Usually, we are used to maybe being refereed in a certain way or being seen in other ways, so we need to keep finding a way. We found a way a bit at the weekend of how to be dominant in the areas we want to be, but most of that comes around our attitude and our application.

“I think our application on the weekend was very good. You look at some of the decisions and mistakes and things, there were still a few in there, but the way we responded to them was far better. It is about dealing with all of those things and then when we are ready to go, we are ready to go.

Lots to love ?? about our first try at the weekend!

“So, there is a bit of a tweak in training and how to prepare best for these games, but a lot of it comes down to wanting to show our speed and our physicality around all the aspects of the game.”

Having experienced such success in both domestic competition and in Europe, Wray has been a huge part of the Saracens journey. Of course, the name Wray is synonymous with Sarries as the club’s benefactor and former chairman Nigel Wray is the man who guided the team all the way to the top.

The five-time Premiership winners were relegated to the Championship following an investigation into the side’s salary cap so all that the players can do now is focus on the task in hand.

Having recruited players from numerous Championship clubs, including Jaco Venter and Alec Clarey from Jersey, it is, of course, very possible for Mark McCall’s side to regain their Premiership status at the first time of asking.

“I think they (players recruited from the Championship) have obviously been invaluable in many ways around talking about what to expect, in terms of places we are going to be going, types of refereeing, all these different types of things,” Wray said.

“Ultimately, it all comes down to us being the team we want to be, and in many ways, it doesn’t detract from where we want to be anyway. I suppose it is just things here and there which are going to go against us at times.

“It is just how we overcome them and go through them, but the overriding message that I spoke about before, about us being dominant in our collisions and our speed of play, no matter what happens and that was one thing I was quite pleased with on the weekend.

“We were able to deal with a lot of stoppages, things didn’t quite go our way, the charge down try which they got, that was the things which we potentially didn’t deal as well with, but this week we are very focused on what we are going to do and how we are going to do it.

“For me, that stood through, so if we can bottle that up, that’s what I want to be a part of the whole year and I know that when we are like that, we are very difficult to play.”

On a rest week in the Championship season, the Saracens players will be watching on as a number of their team-mates contribute to the final weekend of Six Nations action. Six players have been heavily involved with the England campaign, whilst Sean Maitland has been ever-present for Scotland.

The England players have garnered the most attention from media and fans alike, though, with the lack of game time for the Sarries contingent under the microscope in the run-up to the Six Nations.

Owen Farrell, Maro Itoje, Jamie George, Mako Vunipola, Billy Vunipola and Elliot Daly are expected to be involved for England against Ireland this weekend and Wray says that any question surrounding their efforts seemed to be the simple response to an England team that wasn’t performing to its optimum potential.

“I speak to them a lot, always keeping an eye on how they are doing, England in general, but I’d be lying if I said I wasn’t just watching them individually,” Wray said. “There was a lot of things going around about if they had played enough, had they played well enough, all of these things, but I thought some of them played pretty well to be honest in the game before the France game.

“Mentally, physically, they are so well attuned to where they need to be physically. That was never an issue and I think you saw that this week when they were a week further on in their prep. They were absolutely fantastic and all of them were brilliant.

“It is brilliant to see them doing well and I am sure they are going to go well again this weekend and finish the competition on a high and I am looking forward to catching up with them when they are back and kicking on and enjoying the last few months of the season and really flying into the games to come.”