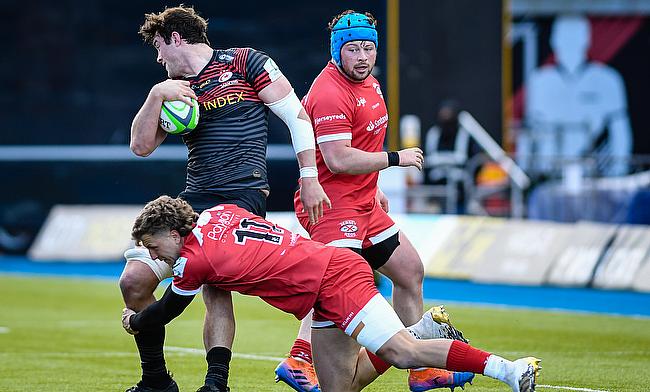 Saracens responded from their opening round defeat in the Championship to score seven tries as they beat Jersey Reds whilst Ealing Trailfinders, Cornish Pirates and Doncaster Knights made it two wins from two.

Doncaster continued their 100 per cent start to the season after edging another see-saw contest against Coventry.

The Knights built up a strong 20-7 half-time lead before holding off an intense Cov fightback in the second period.

It was Coventry who opened the scoring, with hooker Nic Dolly going over from the back of a rolling maul for his second try in successive weeks.

The rest of the half belonged to the home side, as tries from Kyle Evans, John Kelly and Charlie Foley put them firmly in the driving seat. Having scored three within half an hour and with Coventry’s Luc Jeannot in the bin due to repeated scrum infringements, the bonus-point was seemingly inevitable.

Sam Olver, who was involved in so much, added a conversion and a penalty to secure a handy Knights advantage into the break.

However, that was the final scoring act for Doncaster with the visitors working their way back into the game and eventually scoring through Ben Nutley on the hour mark. Another try quickly followed for Rob Stevenson as Coventry really ramped up the pressure in search of a stirring comeback.

Crucially, only one of the conversions was kicked, leaving Donny with a single point advantage. There was no repeat of last week’s late winner for Coventry, a frantic final quarter passing without further score.

Bedford secured their first win of the campaign, getting off the mark with a hard-fought victory against visiting Hartpury.

Neither side could get a foothold in the opening exchanges, but Hartpury’s Josh Bragman opened the scoring with a penalty inside 10 minutes before Will Maisey returned the favour soon after for the Blues.

Bedford came alive for the game’s opening try at the end of the first quarter, Rich Lane adding the finishing touch and Maisey converting for a 10-3 lead.

The kickers exchanged another penalty apiece as Maisey again responded to Bragman.

But Bedford then made a mess of the resulting kick-off, fluffing their lines, allowing Ben Foley to continue his purple patch of form following his exploits in Round 1. Bragman added the extras to tie the game at 13-13.

There was still time for the home side to secure a lead at the interval as flanker Joe Atkinson weaved his way over from 40m off the back of a Bedford lineout for a superb score. Maisey made no mistake off the tee for a 20-13 advantage.

Bedford pushed this lead out significantly at the start of the second half. Maisey added another penalty early on before converting a James Fish try when the hooker drove over.

The Blues had a cushion, but Hartpury sprung back into life in the final 10 minutes to set up a tense finish.

Replacement hooker Nick Selway was the first to go over for a try that Bragman converted before Aled Ward did the same soon after, leaving the score at 30-25 with the clock ticking down.

However, Maisey was able to stretch Bedford’s lead back out to a safe margin, with a fourth and final penalty that secured the Blues' win.

There was still time for some final play drama, though. Hartpury secured the chance for what would have been a deserved losing bonus point, but Bragman pushed wide a penalty to put an end to a thrilling contest.

Saracens provided a strong response to their opening day defeat, scoring seven tries in an emphatic victory over Jersey, ensuring no repeat of last week’s shock.

On their first outing of the season, the Reds took an early lead as Brendan Cope slotted a penalty after only a minute when Sarries were penalised from kick-off.

Saracens quelled any concerns when Alex Lewington scored his first try of the afternoon within 10 minutes, giving the hosts a lead they would never relinquish.

Cope was able to add a second penalty for Jersey soon after, but Saracens then took it up a gear, wrapping up the bonus-point with another three tries before half time.

Lewington doubled his tally for the day with Manu Vunipola adding a second conversion before Elliott Obatoyinbo and Duncan Taylor got in on the act to make it 24-6 to the hosts at half-time.

That advantage was extended further as Obatoyinbo grabbed himself a second and Vunipola this time did convert.

From there, Sarries kicked back into gear with Rotimi Segun scoring their sixth of the afternoon within the hour, allowing skipper Jackson Wray to have the final say in the closing stages. Vunipola added the two conversions to leave the final score at 45-13.

Travelling Cornish Pirates plundered a maximum haul on their trip to the Athletic Ground, ensuring no hangover from their famous victory in Round 1.

Richmond finally hosted a Championship fixture again but were always up against it with their Cornish counterparts clinical.

An open start to the game settled down when Pirates' Luke Scully got the scoreboard ticking with a penalty inside 15 minutes in testing conditions.

They registered the first try of the afternoon soon after as scrum-half JB Bruzulier was alive to dive over to give his side an 8-0 lead.

Richmond had an opportunity to reduce the arrears heading towards the break, but Tom Hodgson missed from the tee meaning no further first-half scoring.

??Match Report is up!

Another big win for The Pirates, securing the bonus point in the last minute of the game. Big thank you to Richmond for having us and good luck for the rest of the campaign.

The home side had their best spell of the game in the second period, forcing a succession of penalties, leading to Pirates hooker Dan Frost being sent to the bin.

Despite the man advantage, Richmond were unable to score, and once Pirates regained a full complement of players, they made their opponents pay for their failure to convert chances.

Maliq Holden crossed just before the hour, before Tom Duncan barrelled over just five minutes later, with Scully converting the latter following a failed penalty attempt between the two tries.

This gave Pirates a 20-0 lead which remained until the final five minutes.

Richmond finally hit back and got themselves on the board with a Will Kaye try, which Ben Cook converted, but there was still time for the visitors to have the final say.

They wrapped up the game and the bonus-point with a Matt Bolwell score, Harry Bazalgette converting to seal the 27-7 win.

Ealing picked up where they left off in Round 1, romping to an eight-try bonus-point victory whilst also preventing Ampthill from crossing the whitewash.

The Trailfinders set their stall out early on as captain Rayn Smid crashed over on his 100th appearance for his side, with Craig Willis converting for a 7-0 lead within as many minutes.

Ampthill worked their way into the game over the next 20 minutes but could not get themselves on the board, leaving Ealing to extend their lead when Shaun Malton went over from a maul.

The A’s did manage something from the half through two late Russell Bennett penalties, but these sandwiched a superb score from Ealing winger Angus Kernohan as the hosts led 19-6 at the break.

If the first half saw Ealing control proceedings, then the second was complete dominance. They secured the bonus point in the opening minutes as Lewis Thiede went over before the home side again repelled Ampthill pressure.

Fraser Strachan then added his side’s fifth try, which Willis converted for his second two-pointer of the half to make it 33-6.

The final 10 minutes saw further gloss added to the scoreline with Jordan Burns racing over, Smid adding his second from an interception, and fellow centurion Will Davis sealing a near-perfect afternoon. Steven Shingler converted all three tries for an empathetic 54-6 win for the table toppers.