GK IPA Championship Preview: Jersey out to upset Saracens in Round Two 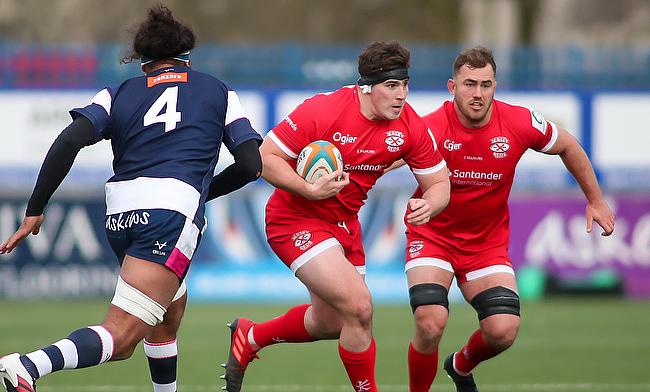 The St Piran's Weekend Miracle - Cornish Pirates following their historic victory
GK IPA Championship Review: Pirates overpower Saracens in compelling opening round
Guy Thompson Column: You haven’t got time to feel your way into this season
A bounce back like no other: Richmond’s return to the Championship

Friday night rugby returns as the second round of Championship action looks to back up what was a fascinating opener last weekend.

It’s never safe to read too much into form and results in the second tier, but with only 10 league games for each club in this shortened season, the table will take shape quickly as patterns begin to emerge.

A trio of games in the capital on Saturday punctuate another exhilarating weekend of Championship action, so read on for the lowdown on each match-up:

Two sides that left it late to secure wins last week get us underway on Friday evening, with the potential to generate some real momentum for the rounds ahead.

Both had to rely on match clinchers from the tee, with Sam Olver’s conversion seeing Donny past Ampthill, whilst Tony Fenner’s last gasp penalty snatched the points for Coventry against Bedford.

This particular fixture proved to be the final game of the 2019/20 season, Cov securing a bonus-point victory at Castle Park for the second successive season and making it three wins in a row against the Knights. Doncaster will look to put a halt to the pattern as Championship rugby makes its return to Yorkshire.

Both sides will be keen to build on opening day victories and continue improving their games. This should be an intriguing match that can propel the victor towards the higher reaches of the table at this early stage.

Bedford and Hartpury suffered contrasting fortunes in Round One, with the Blues the victims of that late sickener in an arm wrestle at Coventry, whilst Hartpury cut loose for a handsome bonus-point win at home to Richmond.

This weekend’s hosts were one of only two sides not to score a try in their opening fixture. They will now be expecting a big response on their return to Goldington Road, but they may have to do it without some key figures as a result of injuries and the citing commissioner.

The visitors on the other hand managed five tries, including a hat trick from Ben Foley, with the first a try of the season contender.

Bedford have won the last four against Hartpury at this venue, so the West Country outfit will be keen to put that right.

Sarries return home with their tails between their legs off the back of that chastening defeat down in Cornwall. They welcome a Jersey side who will be desperate for action having watched on during their bye week.

That result in Penzance saw Saracens’ set-piece picked apart, but they have moved quickly to sign hooker Ethan Lewis and second-row Toby Salmon as injury cover this week - which they will hope provides a sharp improvement to their lineout and scrum.

The Reds will take confidence from the Pirates' showing as they begin a run of five successive away trips due to travel concerns.

Jersey will be raring to get going whilst a shell-shocked Saracens look to get to grips with the Championship and avoid a second successive slip up against another of the division’s gems.

Richmond welcome the much talked about Pirates for a game that may not hit the same headlines, but it is certainly just as important.

This will be the hosts' first Championship match at the Athletic Ground in almost two years, having spent last season in National One, as they trade places with London Scottish as The RAG’s second-tier side.

Two of the men of the moment, read what the players said about their exploits below??

It was an unhappy opening for Richmond in Round One as they suffered a lopsided defeat at Hartpury, but there were positives, including a magnificent solo try from debutant Callum Watson.

Their Cornish visitors put the spotlight firmly on themselves with that magnificent result at the Mennaye, and Pirates have managed to do the double over Richmond in each of the last two seasons when the teams have been in the same division.

Richmond will aim to snap that streak in order to get some points on the board whilst the travelling contingent will look to back up last week’s success.

Round Two’s action concludes with the table-topping Trailfinders welcoming Ampthill for a fixture that saw 15 tries and over 100 points in last year’s edition as Ealing romped to a 77-26 win.

The hosts began this season in much the same vein putting on eight scores at Nottingham in an ominous warning to their Championship rivals. The addition this week of centre Matt Gordon only strengthens an already stacked squad.

Ampthill, meanwhile, succumbed in that late home defeat to Doncaster. It was a game that will both encourage and frustrate, with three yellow cards for the A’s contributing heavily to the latter.

Ealing will hope to keep turning the screw in a promotion battle where they broke early ground, with Ampthill aiming to bounce back on the road.

The Green and Whites sit this one out having suffered that heavy defeat at home to Ealing in Round One, their first rugby of any sort in over a year proving to be a baptism of fire.

A bye week allows them extra time to prepare for a trip to Ampthill, which will provide a second chance to get their season truly underway.