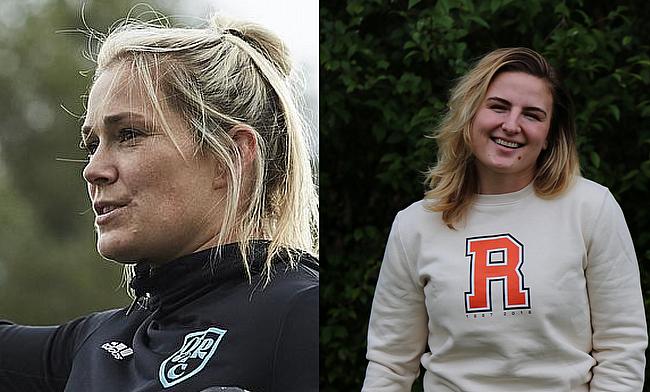 Charlie Beckett Column: What rugby can learn from The Hundred
Poppy Cleall Exclusive: “The people I'm playing with are who I play for”
Stef Evans Exclusive - Falling back in love with rugby and turning #ICare awareness into action
Exclusive - Rachael Burford: “We want to showcase our role models in the game to help inspire others”

Rachael Burford and Stef Evans are two female athletes who continually strive to break down barriers within women's rugby.

The duo, who play for Harlequins and Worcester Warriors respectively, have been instrumental in campaigning for women's rugby to become more accessible and to help tackle gender inequalities within the sport.

Burford is the founder of Girls Rugby Club, which provides an opportunity for girls to connect via an online interactive coaching platform and face to face workshops. It's a fantastic initiative that has been running since 2016 and was under the name Burford Academy until Rachael and her team re-named it Girls Rugby Club last year.

Evans is the director of Ruggette RFC. After returning to rugby and failing to find any of the kit she wanted to buy for herself, she founded the company in 2018 and focused on making rugby apparel specifically designed for women. It's a brilliant brand which is comfy, stylish and affordable.

She's also behind the #icare movement which has led to huge online support for women’s rugby since it began at the beginning of this year. When the Women's Six Nations was postponed due to the Covid-19 pandemic, a number of people online commented that ‘nobody cares.’ In response, the #icare movement began a call for women’s rugby fans and players to show their support for the sport.

?? "The enjoyment I take from watching a game of women’s rugby is one reason #ICare."

With both working so hard to keep the sport I love moving forward, Rachael and Stef gave me their thoughts on a possible next step for the game; the prospect of a British and Irish Lions women's team.

"I think it's another growing opportunity for the sport as a whole, not just the women's game," Burford tells TRU.

"I think it's a brilliant concept and in terms of producing an incredibly strong women's Lions team, there's no question that that's there. We do have to ask ourselves right now though, where is the opposition that can match that?

“It's not to say it won't get there but it's asking the question of what's available right here and now, although you look at the work being done in South Africa and Australia and see it's got potential.

“It's exciting and long term, there will be a place where it exists. It may well take off in 2025. We don't know. It gives the sport three or four years to grow, though.

"There's nothing to say we couldn't play a warm-up game against France for example, like the men's Lions squad did here in the UK at Murrayfield back in June. I know that takes away the tradition of it, but we may well have a different path or entry into it".

Burford added: "If the tour was to go ahead, I'd like to see the tournament take place in New Zealand, although you could hold it in France and bring New Zealand over there. I'm always changing my mind when I'm asked the question. It's such a tricky one! There are many ways it could work to make it attractive and keep those traditions alive."

When asked the same question, Evans echoed some similar thoughts: "It's got great potential. I think it already had great momentum before Covid, but the pandemic probably hasn't helped its cause.

With the support of our ambassadors, we've invested in a feasibility study exploring the establishment of a women’s rugby Lions team which would be monumental for women's international sport.

We will share more soon, but for now find out more here: https://t.co/0ZhvHRY9lS pic.twitter.com/xHsE6KC5iA

“I’ve never felt like it's not going to happen, though. It's just figuring out the logistics of it, especially as the buzz around the idea grows. People want to see a women’s Lions tour, and there’s absolutely no reason we shouldn’t have one.

"Rugby is growing so quickly worldwide because of female involvement; rugby is the driving force and that's why it's growing so quickly. International women’s tours are spot on for both serving that growing market and growing it further.

“I think there’s a huge appeal of having a Lions tour in North America, though. In Canada and the USA, rugby is huge, and the women’s game is growing fast there. It would be a good chance for the Lions brand to gain exposure in the North American market. I think it could serve as an example as to how the women's game can bring more people into the game in general.

“By prioritising having a tour in North America, which I hope they would do, I think that has a real equal opportunity of getting the Lions exposure in a market that probably has no idea who they are.”

The next question both women were asked was what would be the driving force behind it all? Burford responded first: "Commercially, I think it's a brilliant opportunity.

“You think of the Lions and why it is where it is, it's because of the amount of revenue it brings in. It's another opportunity for a revenue stream to build a new fan base. It would bring the British Isles together and it provides something else for the women's game!

“You see how excited people got when supporting the Great Britain 7s teams [in the recent Tokyo Olympics] and I think it's a very similar concept. We can get more people involved in the game. You think of how many people are Lions fans. They may be more inclined to watch the women too because they love the tournament as a whole.

“You could use those viewing figures to sell the rights etc. Money is definitely one big driver, but I also think where we are in the world at the moment, we want to have as many equal opportunities as possible and that's why I think the work Royal London are doing is really important because they are actually looking into it and seeing if it is sustainable and can be celebrated. The last thing you want is for it not to succeed."

"I also would be interested to know what the plan would be in terms of paying players who don't have full-time contracts etc,” Evans suggested. “I would hope they would be given some sort of payment".

Congratulations to all! Such a special time for all involved! Reckon we will see a women's official Lions one day! ?? pic.twitter.com/qa16dXh2XH

Growing up, Burford wasn't that drawn into the Lions: "Maybe it's because there was no avenue for women, I'm not sure. As I got older though, I definitely got pulled into the concept of it and fell in love with it. I fell in love with the team camaraderie when we played 7s tournaments with Samurai. Now, I'm fully invested and I love following the games when they're on".

With the Allianz Premier 15s kicking off in style last weekend, both Burford and Evans want to see the game take that next step.

With that in mind, the latter was asked who she would include in her possible Lions squad. There was a pause for thought: "This is such a good but hard question (we laugh). I'd definitely have Jaz Joyce in my squad, who wouldn't?! Find me someone who wouldn't have her in their squad. She's got absolute wheels!

“I think one of the cool things that tours like this can offer is picking players who are firmly at the top of their careers. It's also a really cool opportunity to bring together players who have a wealth of experience and who might not have been able to play together, e.g. stars from Ireland and Scotland. I would love to see Poppy Cleall, Hannah Smith, Shaunagh Brown, Marlie Parker, Anna Caplice, Sene Naoupu and Siwan Lillicrap in a Lions jersey!”

With the visibility of the game constantly being improved, with figures such as Burford and Evans helping to drive that, their excitement about the concept of a tour just highlights the opportunities a women’s Lions team could bring to the sport.