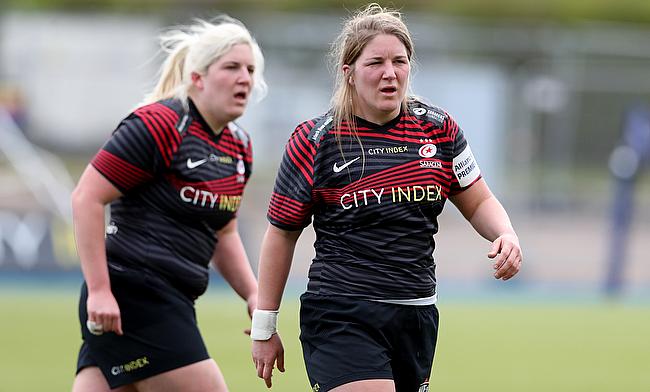 Exclusive: Harlequins Fly-Half Ellie Green Ahead of Allianz Premier 15s Final Encounter With Saracens
May Campbell Exclusive: “Having my parents at the final will mean a lot to me”
Postponed Rugby World Cup to be played in October and November 2022
England Women defend Six Nations title with 10-6 win over France

2020/21 was quite the season for Poppy Cleall. The No.8, who currently plays for Saracens and England, picked up accolades left, right and centre.

And now the dust has settled, Cleall admits it has been a crazy 12 months for herself.

"It's been the most bizarre season, particularly with the new Covid rules we've had to abide by and playing a game of rugby with hardly any scrums has been so odd!” she tells TRU.

“Games being cancelled left right and centre with no warning has been tough so to have got through the season and with playing as much rugby as we did, I think that's more of a win than half of my trophies!

The moment Poppy Cleall find out she had won #WomensSixNations Player Of The Championship! ?? pic.twitter.com/wzAnbn6wzF

“It was fantastic to play in front of as many fans as we did against Harlequins too because we've missed them. They're very loud! They all got a good day out in the sunshine, didn't they?!

“To have completed a year where we spent hours training alone in our gardens for months, completing pre-season in restricted bubbles etc, I'm so glad we got through it. To have managed to play as well as I have done, I can look back and be proud of the performances I put in. It's my biggest achievement of the year. I look back on the lockdown and have happy memories, despite the tough restrictions that were put in place for everyone.”

Later on in our conversation, Cleall was asked if she thought the league had shifted up a gear despite the challenges Covid imposed: "With the new laws and adaptations, I think it's hard to judge this year on the pitch. You can definitely judge it on the calibre of players that we're playing with, week in week out, though.

“I think at Exeter, they have eight captains playing for their respective countries in their squad. It's crazy and insane. So many of the players we play with or against are outstanding within the Premiership and who play in World Cups. The more international players that come over here, the better the league will be.

“The influx of the Welsh players who have come over to play is brilliant. I think 90 per cent of the Welsh international team are playing in the Premiership. You can see it's getting better with the attraction it's having on others.”

Cleall will now be hoping to add to her trophy collection next year when the Red Roses travel to New Zealand for the Rugby World Cup: "I am really looking forward to the occasion, although I don't know if I can get too excited yet as it's still another 15 or 16 months away! It's even later in the year as it's going to take place in October/November. We've got a long wait and so many fitness tests and camps to get through but yeah, it's going to be a big one and I can't wait to get started.

“My goal is to go to a World Cup with my sister, Bryony. That would be the dream. She was out there watching the 2017 one and she flew over with her friends to support me. To be there in New Zealand together, though, would be incredible. It's definitely the ultimate aim and the next 16 months are what we're looking forward to. I hope our parents are proud of us.”

As our interview is drawing to a close, the final question asked was how she'd like to be remembered when her career finishes in years to come. There was a pause for thought: "I think I'd like to be remembered as someone who was talented, not just a player who stuck the ball under their arm and ran as hard as they could at somebody!

“I want to be appreciated for bringing something different to my role. I also want to be known as someone who did uphold standards. The teams I'm a part of and the people I'm playing with are who I play for".

The next few months for Poppy are hugely exciting and I for one can't wait to watch.