George Skivington: I think the squad is at a good point now 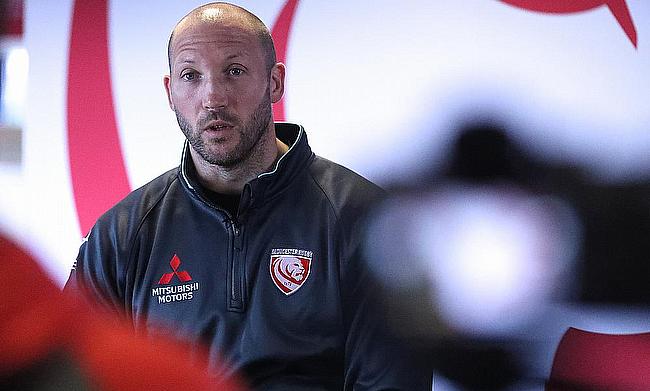 So how far have Gloucester come?

We could assess George Skivington’s first nine months in charge and look at the whole picture from when he joined the club in June of last year, but on Tuesday’s press conference, we boiled it down to when his side last met Exeter Chiefs on Boxing Day.

Since then, relegation from the Gallagher Premiership has been scrapped - which may have lifted some collective weight off Cherry and White shoulders - but a lengthy injury list and absentees have not helped a spluttering Gloucester click into gear.

When Skivington’s charges collided with the champions during the festive period, they gave Exeter a run for their money. On that particular afternoon, the Gloucester starting XV looked almost at full strength with the likes of Jonny May and Louis Rees-Zammit in their ranks. Unsurprisingly, the West Country outfit produced one of their best performances of the season in a 28-20 defeat.

With some of the club’s big names returning and available to Skivington this weekend, the Cherry and Whites boss feels his side will be more equipped to challenge the Chiefs once again.

“I think as a group, we have come a long, long way since that point [from the previous game v Exeter],” Skivington said. “I think the boys are a real tight group. The reality is the international boys haven’t been around much at all so that is potentially one of the last games we saw them.

?? Carreras, LRZ & May make up back 3??
?? Ludlow returns as skipper
?? Barton continues at fly-half

“Obviously, Scotland have got their game on Friday, but there is a good buzz about the place. The boys have had some tough games through the last couple of months and some we have fallen the right side of and some we haven’t and now it is just an injection of some good lads and top rugby players. It is exciting.”

As Skivington alludes to, Scotland’s final Six Nations game against France follows Gloucester’s clash with Exeter meaning the Cherry and Whites will be without centre Chris Harris.

The 30-year-old has featured in all four of Scotland’s matches during the championships and despite the rearranged fixture potentially scuppering Skivington’s plans, having a star player unavailable is something the club have become used to.

He added: “With the way we have planned things for the last few weeks, I thought Chris would be returning, but it is what it is. Again, we have had lots of challenges this year. There are things thrown up every week so from that point of view, I am very confident. We have been playing different guys so we’ve got plenty of guys who can play different positions and we are trying to create a squad where we are ready for any circumstance.”

Of course, Skivington and Gloucester aren’t the only team that has had to deal with numerous absentees throughout this campaign, but before their 59-24 loss against Harlequins last weekend, the Cherry and Whites were without 25 first-team players due to injuries, international commitments or rest weeks.

Despite the household names of Ben Morgan, Henry Trinder and Charlie Sharples featuring at The Stoop, there was still a strong element of youth to Skivington’s selection and the Gloucester head coach has been impressed by their character during a run of just two wins from their last seven matches.

“Part of that is for some unforeseen circumstances and part of that is when I came, I was committed to growing the youth and building the squad like Bristol have when they can rotate and still produce results, which is shown by the fact they are top of the league," Skivington said.

“I think we are at a good point now. We’ve exposed a lot of people as we say. Hopefully, that injury list will come down in the next couple of weeks which will allow for some good selection headaches and we know where the youth generally are. There is no rugby for the young guys anywhere at the moment so they are training really hard, but again, throwing them out there against Quins was invaluable just to see how they react.

“For them, that [character] is what a team is based on. Without character and that willingness to fight for each other, you can have the best players in the world and it will only take you so far. With the situations that have been thrown at us and the scenarios we have ended up in, they have really tested that. I think the last few months has been a real growth for us. With the internationals coming back in, their job is to drive standards even higher and bring what they bring.”

But Tuesday’s media duties at Gloucester also focused on a former Kingsholm star. As first reported by the Daily Mail, Danny Cipriani has signed for Bath and the England fly-half will be returning to the Premiership after leaving the Cherry and Whites in December.

Speaking before the official announcement of Cipriani’s move, Skivington said: “I have touched base with Danny a couple of times since he left the club. He was in a good spot when I spoke to him last. He felt good for having a break away from the game.

“Hopefully, he will be back to his flying form and do a good job for Bath. I think when Danny decided to take a break from the game, it was as long as he needed it to be. I think if he has made the decision go to Bath, I wish him all the best and everyone here at Gloucester will too.”

But back to the here and now and for Gloucester, their focus will be trying to get the better of Exeter on Friday evening.

The Chiefs will arrive at Kingsholm having won their last three games and whilst a domestic title defence is high on their agenda, retaining their European crown will also be at the top of their priorities.

Exeter face Lyon in the Champions Cup next weekend and Rob Baxter has made 11 changes to the side which beat Leicester Tigers last time out.

The Devonshire outfit have rested their stars ahead of that aforementioned Round of 16 tie in Europe, but Skivington knows the champions won’t veer away from their Premiership ambitions.

“We are focused on what we are doing,” he said. “We are always putting the pressure on ourselves to execute our game plan and get the energy right in the performance.

“The thing you have to appreciate with Exeter is that there is only one way you win the European Cup and the Premiership and that is because you have got a very good squad and a very large squad where you have bled all of those players and you are very happy if someone steps out and someone steps in.

“I don’t think, from Exeter’s point of view, if you go back through their teams, they mix and match. They send all sorts of teams everywhere and they come away with results. From that point of view, I am absolutely 100 per cent certain that they will be coming to Kingsholm to beat us and we need to focus on ourselves and make sure we get our game right because, as I say, there is no margin for error against these guys.”

On paper, many will feel Exeter still have the quality to get past Gloucester on Friday, but with Skivington naming 10 of the 15 players in his starting line-up who began the Boxing Day fixture down in Devon, can the Cherry and Whites make life difficult for the champions once again?