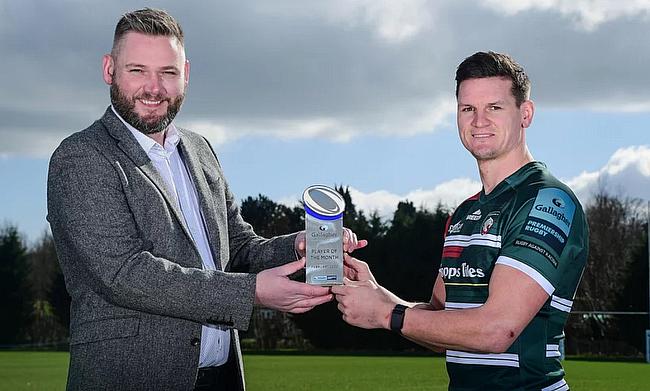 The Tigers' outside-half was at the forefront for the Tigers in February as they strengthened their grip at the top of Gallagher Premiership Rugby according to BT Sport pundit and Gallagher ambassador, Ugo Monye.

Monye said: “Freddie Burns has just been an outstanding contributor for Leicester Tigers and Gallagher Premiership Rugby over the last month. He has marshalled his team and played with real verve and positivity. He's just led his team brilliantly.

“There have been countless games that I've covered of him in the past month where he has just been head and shoulders above anyone else on the pitch. That is testament to not just the player he is but the character he is as well.

“Leicester Tigers have only lost three matches this season which gives them an unbelievable buffer when you look at how competitive the league is from fourth down to eighth or ninth.

“I say it every year. Last year I said it was the most competitive league we've ever seen, but this year is more competitive. We have seen it in the results at the weekend, and we have seen it all season. When you look at the points difference between the top and people fighting to get into the top eight for Europe, it's remarkable.”

Tigers fan, broker and account executive at Gallagher’s Leicester branch Anthony Rostance (pictured above), said: “It was an absolute honour and a pleasure to present Freddie Burns with his award as Gallagher Player of the Month. The Tigers’ masterful form in chalking up four more back-to-back wins in February was matched only by Freddie’s brilliant and blistering play at the centre of every game.

"Instrumental in ensuring Tigers survived the scare at Bath, he led, dominated and entertained time and again, contributing to each impressive points haul. What a well deserving winner – as fans we’ve loved having him back at Mattioli Woods Welford Road, especially on such electrifying form. Well done Freddie!”

Burns’ Tigers team-mate Julian Montoya was second this month with London Irish scrum-half Nick Phipps in third and Monye puts a huge share of Burns’ success down to his attitude.

Burns last won the award in November 2016, while also playing for Tigers, and Monye adds: “He is a bit of a favourite of everyone, and I think everyone loves him because it's so obvious how much he loves the game.

“He's played the game for a long time - his leadership and consistency during this period has been outstanding. When you're a player who has played and often been a starting player, it can be a bit difficult when your role changes within a team.

“But I think it shows a real sense of humility that when he's called upon, regardless of whether it's off the bench, at full-back, at 10, starting or whatnot, he's just been there for the team. That's what he has been able to do.”

As part of his prize for being named Gallagher Player of the Month, Burns wins a shirt signed by the whole Leicester Tigers squad and framed by Gallagher to gift to a charity of his choice, to help them raise funds for their chosen cause. Burns has chosen to honour MND with his donation and particularly to support the recent fundraising work done by Tigers coach Kevin Sinfield.

Burns was judged by a panel of experts as the player who made the biggest impact in Gallagher Premiership Rugby in February 2022.

Burns was voted for by a panel of media professionals based on his performances in February 2022, alongside a public poll on the Premiership Rugby app, which drew more than 1,000 votes.