Fixture list puts spotlight on Exeter Chiefs, so can the league leaders come through unscathed? 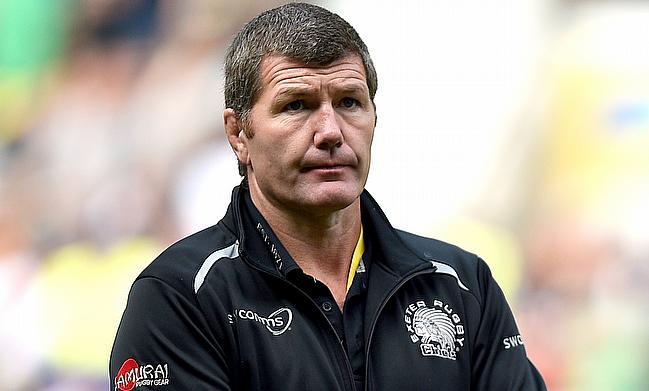 Exeter Chiefs consolidate top position with 26-13 win over Leicester Tigers
Harlequins beat Sale Sharks 16-10 as Premiership restarts
A season to forget or can Exeter Chiefs make it a campaign to remember?
Manu Tuilagi to make Sale Sharks debut against Harlequins

Exeter Chiefs have every reason to be up-beat. The Gallagher Premiership table toppers are looking forward, positively, to the next nine weeks of rugby which could ultimately end in glory.

With this mind, the Devonshire outfit will be hoping to build on last week’s 26-13 win over Leicester Tigers.

Director of Rugby Rob Baxter said his side ‘weren’t fantastic’ on their return to Premiership action, but if the Chiefs do go on to achieve domestic success this year, a frustrating opening 20 minutes against Leicester will not be focused on and instead, their bonus-point triumph at Sandy Park will be remembered as another important step on the club’s journey towards a second top-flight title.

And their route to Twickenham could become clearer following Exeter’s next block of fixtures which include this Friday’s clash with third-placed Sale Sharks before the league leaders travel to Ashton Gate to face Bristol Bears (2nd) four days later.

“It is difficult isn’t it,” Baxter said. “In the bigger context of a normal season, a point away from home in the Premiership is par and anything better than that is above par.

Chiefs TV - We speak with Rob Baxter ahead of @ExeterChiefs Gallagher @Premrugby , rd 15 trip to @SaleSharksRugby on Friday night. pic.twitter.com/wobuoLir0m

“Having said that, because they are two of our closer rivals in the table, you always want to try and create some space because it allows that little bit of pressure to come off yourselves. The reality is they are two important Premiership games.”

Before last weekend’s action, there was an extra layer of interest surrounding Exeter’s rivals with new faces such as Manu Tuilagi (Sale) and Semi Radradra (Bristol) highlighting the ambitions of each club. In truth, both of the aforementioned sides didn’t grab the headlines in the expected manner as the Sharks were nullified by Harlequins on opening night whilst the Bears snatched a late, but crucial victory over Saracens.

The excitement, in fact, came from teams who began Round 14 outside the top four with both Wasps and Bath producing excellent performances against Northampton Saints and London Irish, respectively.

Exeter are currently eight points clear of second-placed Bristol, but fly-half Joe Simmonds told TRU he feels the pressure which their fellow top four contenders are generating is something the Chiefs can relish.

“We’re the team that they are chasing down,” Simmonds said. “Everyone wants to be that top spot, and in that top four. I think it is exciting for us. I think it is good for us because it means every game we play will be a big game."

Simmonds’ thoughts were echoed by his Director of Rugby: “You look at what has happened already. Harlequins, Wasps, Bath; they have all won games and they are all starting to put pressure on what is the top four and I think what has been a little bit false, probably because lockdown has been so long and we have been looking at that top four for so long, is that we kind of think the top four is set in stone and it is established. It is not established.

Despite Baxter’s stance, his opposite number on Friday night, Steve Diamond, feels that an element of this campaign is already close to being decided.

Earlier this week, the Sale boss said: “They [Exeter] have probably done enough already to guarantee themselves a home semi in the play-offs”, but Baxter was keen to stress the importance of not looking too far ahead.

He added: “I hope Steve is right! You have got to trust Steve. He knows what he is talking about! We should all be agreeing with him, shouldn’t we?!

“The reality is that there is a lot of games and there is a very compact table and we could go from feeling pretty good about getting the points we want this weekend, to losing a couple of games against our closest rivals.

“I would love to go ‘we’re going to knock off some wins now’, but things never really work out like that. The only time you can make things go your way is to keep them in your own hands. The only way you keep things in your hands is by winning games of rugby and collecting points and that is all we will be aiming to do.”

If Exeter are to stay in control of their own fate, Baxter will have to use most of his squad throughout the remainder of the season as a crammed fixture schedule awaits all 12 Premiership clubs.

A number of initiatives focused on ensuring player welfare were announced on Tuesday as some sides, such as the Chiefs, prepare to navigate their way through seven Premiership matches in a four-week period, but Baxter predicts some clubs will look to seek special dispensation if injuries begin to stack up.

“The guys are aware that we are likely to make some rotation in that three-game burst between playing Sale, Bristol and then Worcester,” said Baxter, as Exeter face the challenge of a trio of matches in nine days.

“There also has to be an element of club to club management. Too many hard and fast rules and clubs will be asking for exceptional circumstances all the way through.

“It doesn’t take a genius to work out that if you have injuries in a couple of specialist positions, any planning about maximum minutes or games can go out of the window. Give clubs a bit of autonomy. No squad is big enough not to need exceptional circumstances.

“They players are more susceptible to injuries now in these first two or three rounds than they’ll ever be. That is the reality."

Baxter admitted two members of his squad did express their desire to play every remaining fixture for Exeter and Simmonds can see where some of his team-mates are coming from: “Everyone is willing to play, I think. We are in such a good position this year as we are flying in the Premiership so everyone wants to play in those big games. I know why a couple of the boys want to do it because we have got really exciting games to look forward to.”

After the buzz surrounding the Premiership’s return, the upcoming chunk of fixtures will be fascinating not only because of squad rotation, but also, this period could go a long way to determining the shape of the play-off places.

For Exeter, finishing in the top two has been mandatory over the past few years and with Saracens out of the picture this season, the Chiefs sense an opportunity to add another domestic title to the Sandy Park trophy cabinet.

The spotlight will be on the next two fixtures for Baxter’s men and if they can come away from the AJ Bell and Ashton Gate unscathed, it will be two significant steps towards the Premiership jackpot.