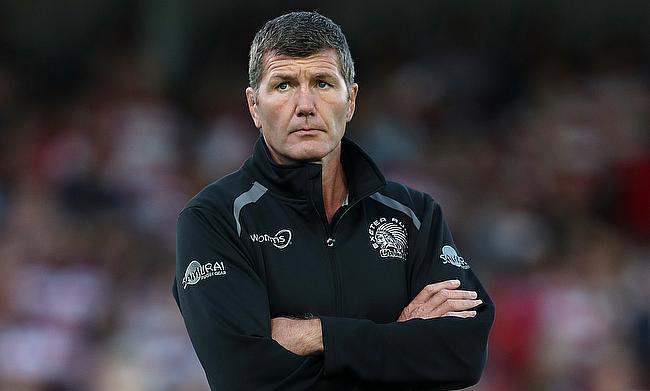 Saracens - The Farewell Tour
“Champions Cup: our ambition” is Bristol’s aim and the Premiership restart could see the Bears take their next steps
Exeter Chiefs retain name and logo but retire mascot
O’Flaherty: I’d be all for playing behind closed doors

When the dust eventually settles on the 2019/20 Gallagher Premiership season, it will be a year which won’t evoke too many fond memories.

People will recall the Saracens salary cap scandal when reflecting on the campaign whilst contract disputes and financial issues have been very much in the headlines due to the coronavirus crisis.

Imagine, then, what Exeter Chiefs must be feeling like as the season sets to resume this weekend as Rob Baxter’s side look to pick up from where they left off before lockdown.

The results and performances from the Devonshire outfit prior to the enforced break have shaped this term into a campaign of hope and expectation for Exeter and whilst negative stories surrounding the game have dominated the narrative of this season, it could be a year which ends in euphoria for the Chiefs.

For the Sandy Park faithful, this would be a welcome change having seen their side lose three of their last four Premiership finals against Saracens, but with the current champions already relegated, the opportunity for Exeter to claim their second top-flight title is a golden one.

Alongside the Chiefs’ domestic ambitions are their European aims. Exeter negotiated their Heineken Champions Cup pool with minimal fuss and in September, they will take on Northampton Saints in the quarter-finals meaning the next 10 weeks could be a significant period in the history of the club.

“In ten weekend’s time, you can sit here and have a big say in what your future will be,” Baxter said. “For us, we are still in with a shout of that being a two cup 10 weeks, or one cup or zero cups.

“Those things should be hugely exciting. How many times do you get the opportunity to say that as a group of players? In ten weeks’ time, think about where we could be and what we could be celebrating. You can decide to really relish that and enjoy the challenges or you can decide to find all the problems that are there. There is no problem that’s insurmountable so let’s embrace them and enjoy it.”

Exeter return to action on Saturday afternoon when they welcome Leicester Tigers to Sandy Park, with Baxter’s charges currently five points clear at the top of the Gallagher Premiership standings.

Like all their fellow top-flight clubs, Chiefs haven’t played a competitive fixture for over five months but despite the long lay-off and the busy schedule ahead, Baxter is treating the resumption of the campaign as if it were the beginning of a normal season.

He added: “We are not looking at it any differently. One thing that hasn’t got spoken about is the timing of all of this isn’t all that different to a normal season!

“We are used to playing games at this time of year. What would you be doing now around mid-August? You would be starting to get your head around pre-season games so if you looked at Leicester being your first game of a pre-season programme and when would you be finishing? Well, you would be finishing sometime in June [including the 2020/21 campaign] if you are successful. The actual overall season is not ridiculously longer, it is just differently put together and we have got more Premiership games.

“You are just going to see a shift in where your squads were used before. We can do it. If you structure your season well it isn’t so unbelievably different to a normal year. There are just more frontline games.”

With that in mind, Baxter admitted Exeter are keen to ‘start with a bang’ as they look to build on the foundations they have already laid and skipper Jack Yeandle feels the position the Chiefs find themselves in gives his side an extra edge over their other competitors.

“Like Rob has alluded to, this time of year is normally when we are kicking into games anyway,” said Yeandle.

“As far as kind of pushing on from where we are, it is starting the league season at the top of the pile. Normally everyone is level-pegging so we have got that slight advantage so it is all about making that advantage count as well as the slight difference. The season is normally compared to a marathon in the sense that there is a lot of games.

Yeandle has been named in Exeter’s matchday 23 to face Leicester on Saturday, which wouldn’t have been the case if the fixture had been played back in March.

The Chiefs captain suffered an injury to his forearm against Glasgow Warriors in November, but the lockdown period has allowed the hooker to recover and return for the table toppers in time for the restart.

The 30-year-old was able to increase his fitness levels by using the home gym of next-door neighbour and teammate Jack Nowell during lockdown and as a club, in-house matches between the squad has seemingly left Exeter in a good position ahead of the weekend.

He added: “We’ve had an internal game which was a full 80 minutes and the week before, we had a 40-minute game. Boys are in really good shape so hopefully we will see that come the weekend, but from the 80 minutes last weekend, it was very intense, very hard and definitely very physical coming up against your teammates.

“I was pretty sore after the first game, but I felt a lot better after the second game! I think we are in a good position and we’re ready to go.”

Across the course of the weekend, Yeandle and his teammates will also be part of Premiership Rugby’s response to the ‘Black Lives Matter’ movement which has seen athletes in other sports, such as football and cricket, take the knee before the start of play.

However, there is not a unified approach to how Premiership sides will show their respect towards the campaign with clubs like Harlequins and Leicester opting to take the knee whilst other teams are choosing to go down different routes.

??"We are uniting as players to combat racial discrimination, in our sport and in society." #BlackLivesMatter

For Exeter, Yeandle did not reveal their plans, but his Director of Rugby expressed concerns that players could be ‘hung out to dry’ because there isn’t a united decision across the league on how to mark the movement.

“'I am a little surprised that Premiership Rugby went this way because just dropping it on clubs and saying "there you go, do what you like" is like hanging some players out to dry,” Baxter said.

"I don't really know how much positive press players will necessarily get if they have a different opinion. Our players have decided what they want to do and I'm going to leave them to do that on the weekend. They will take the stand together as 'Rugby Against Racism' 100 per cent.

“This hasn't been forced by us as a club, it's been led by the players and we are going to support them in whatever they choose to do.”

The spotlight will certainly be on the Premiership’s return this weekend for multiple reasons and in terms of the rugby itself, Exeter may well be front and centre of it all.

With a wonderful opportunity to add another top-flight crown to the Sandy Park trophy cabinet as well as the possibility of creating history in Europe, the next two months should enthuse Exeter supporters and players alike. ‘Can you win both competitions?’ “Yes” was the simple response from Yeandle.

Whilst others may not remember the 2019/20 campaign with great fondness, it could be a season which goes down as one of the greatest in Chiefs history.