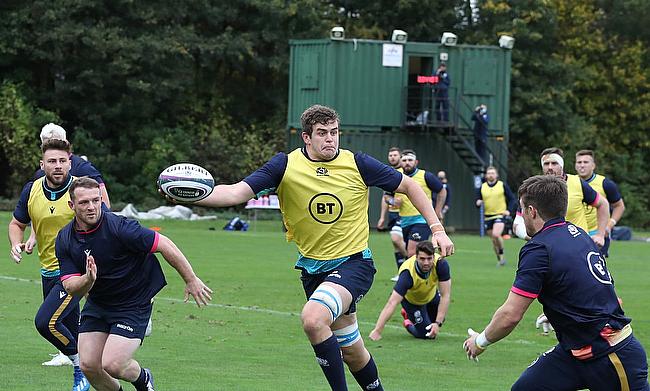 Scott Cummings did not make his full Scotland debut until August last year, but now he has played his part in the last 13 Test matches and is likely to start against Wales in the Six Nations this Saturday.

The Glasgow Warriors second-row was earmarked as a player of potential from his teens when he and Andrew Davidson, now with Edinburgh Rugby, were team mates at Kelvinside Academy.

Cummings was always a big lad who could carry the ball well, but in that school team in Glasgow, he showed there was more to his game and that impressed coach David Wilson at the time.

When he left school in the summer of 2014, Cummings was handed a development contract with the Warriors and started to play his club rugby with Glasgow Hawks.

Finlay Gillies, the former Warriors hooker who also turned out for Scotland Sevens, was a part of the Hawks coaching team at the time.

BT Murrayfield isn’t quite the same without fans, but it’ll always be an honour getting to represent Scotland. Especially during such difficult times. Thank you for everyone’s support.???????????????????????????? @scotlandteam @craigwatsonpix #asone

“He came out of a good school team at Kelvinside with Andrew Davidson and Davie [Wilson] spoke very highly, so it was good to get them into a senior club environment and get a look at them,” Gillies told TRU.

“It is fair to say Scotty impressed many of us straight way. He was a very hard working kid, very coachable, very unassuming and he got involved with the guys straight away and wanted to be part of the squad which can sometimes be a bit daunting for a 17/18-year-old coming into a group.

“There was certainly no ego attached to Scotty. He puts in the hard yards and always wants to get better. He had a great skillset and his desire to learn all about running a lineout was brilliant.

“At school he had been well coached and it showed because his running lines were excellent even at that age and his smart support lines were very intelligent meaning that he was always on the attacking player’s shoulder.

“You can see that now with Glasgow and Scotland. He has become a big ball carrier and he makes a good few yards for them and that is because of that intelligence.

“I can imagine he is the kind of player that Gregor Townsend really loves having around with Scotland. Scott is already very good and the great thing for Scotland is that he can get even better.”

Cummings, 23, has not yet faced Wales in his fledgling Scotland career and is looking forward to potential locking horns with Alun Wyn Jones in Llanelli.

“He’s a great player, he’s played for Wales for years and years now and you don’t get to that stage unless you’re a really high quality player,” Cummings, who could pack down alongside the returning Jonny Gray in the ‘Super Saturday’ clash, stated.

“He’s an inspirational leader and I’m sure he’ll have a great game at the weekend, but it’s up to us to try and ruin the occasion for him.

“In terms of our preparation, well from a forwards point of view, you don’t get much bigger guys than the Georgians. You know they are going to bring a big physical pack that will give your forwards a massive test, so it was great to come up against guys like that at BT Murrayfield on Friday night.

“We enjoyed playing Georgia and feel we have learned certain things from that outing that will help us this weekend.”

“We were definitely building before the break”

Scotland lost their first two Six Nations matches to Ireland and England, but bounced back to defeat Italy and France before lockdown and the subsequent phases.

They secured a solid 48-7 victory over Georgia last time out on their return to action and Cummings believes they can take confidence with them down to Wales where they haven’t won in the tournament since 2002.

“I think that when we got those two wins against Italy and France that we were definitely building, our defence was getting better and better,” he said.

“The way we were playing was with a lot more confidence and I think that now we’ve come back together, we’ve still got that confidence. We’ll go down to Wales pushing and expecting to get a good result.”

The Scotland squad to travel to Wales is due to be named on Thursday lunchtime.