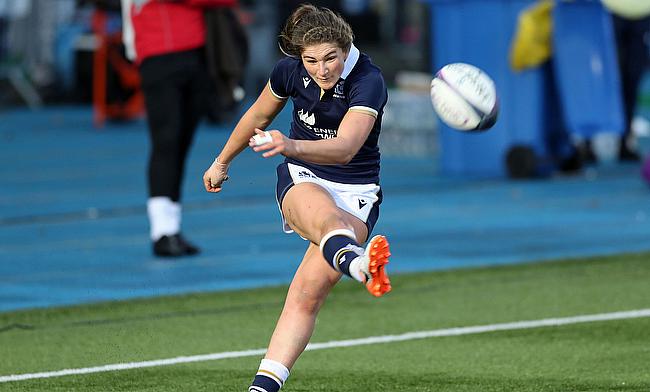 Zoom in for a debut try, Zoom chat with proud parents - now van der Merwe is focused on the Six Nations
“He deserves everything that comes his way”: Dulwich College proud of Oli Kebble ahead of Scotland debut
TRU x Looseheadz Podcast: Natasha 'Mo' Hunt
Lee Anne Steel: “Grassroots rugby is the lifeblood of the sport”

Due to the current climate. there were not many people inside Scotstoun on Sunday, but Scotland stand-off Helen Nelson was undoubtably the calmest of the small band who were in the stadium as she stood over a crucial conversion attempt.

A well worked try out wide in the 73rd minute of the Women’s Six Nations match with France pulled the Scots back to 13-11 down.

With the wind swirling and the rain falling on an autumnal afternoon in Glasgow, the kick to add the extras and level things up at 13-13 was very tough, but the 26-year-old Loughborough Lightning player sweetly connected with it and the ball dropped over the bar.

By this point, the momentum had swung into the Scots’ favour and if the game had continued much past the 80 minutes, then the hosts may have gone on and won it.

However, given that they had not played a Test match since they were beaten 53-0 against England back in February and considering Scotland had also lost their last eight Six Nations matches dating back to March 2018, then a draw was a very positive outcome for Bryan Easson’s side.

Many thanks to everyone who has taken time to support and give encouragement to this team. The support we get from you is so appreciated by all. #AsOne https://t.co/nr2Ra2szVs

It was even more positive when you consider France had won the last 10 meetings between the sides, one in the World Cup in 2010 and the last nine in the Six Nations, with the aggregate score in those matches being 426-23 to France.

“I had managed to kick two penalties earlier in the game, but then missed another just a few minutes before the conversion attempt,” cool customer Nelson, who was winning her 29th cap, told TRU.

“I think I overthought that one or didn’t strike right through the ball so I wasn’t thinking about the magnitude of the conversion when I was taking it. I was just going through my usual processes and not overthinking things.

“All I was thinking about was kicking the ball cleanly and then, once I saw it had gone over, I was straight back to our half and was focusing on the next job which was our team receiving the kick-off and exiting properly.

“The conversion was a big moment in the game, but as a kicker you try not to get too high or too low and just focus on the kick in hand at the time.”

“We really fronted up”

When France went 13-3 up in the 45th minute, some may have feared that the floodgates would open.

However, Easson and his coaching team of Ross Miller, Tyrone Holmes and Gary Strain have been helping this Scotland squad develop a tougher edge in recent weeks.

And, with France down to 14 players in the last quarter having used all their replacements, the hosts went for the jugular.

“Even when we were 10 points down, we did not panic and we were still pretty confident. We wanted to put pressure on the French,” Nelson, who kicked a 62nd minute penalty to make it 13-6, added.

“When they went down to 14, it meant there was more space in the wide channels and we wanted to pin them down in their half and play with tempo and, as a result, they started to cough the ball up and we took encouragement from that.

?? Watch highlights of yesterday's dramatic draw with France at Scotstoun Stadium in the @Womens6Nations Championship. ??https://t.co/XPHsIS5B16

“Our forwards played so well in the game and put in an absolute shift by carrying the ball hard in attack and also defending very well.

“We really fronted up and when we had the ball in hand in the last 20 minutes, we challenged France out wide and stretched them as was seen by the try that Rachel Shankland scored on the wing.

“We have worked really hard on our defence. To play against and try and challenge the top teams, you have to defend well and we have to take confidence and belief from this game.

“Next up we head to Wales on Sunday in the Six Nations and we can’t take our foot off the gas.”

In December, Scotland are due to play Italy in a Six Nations/World Cup qualifying double header before facing Ireland and another European country - likely Spain - in World Cup qualifiers, but all they can focus on now is Wales.