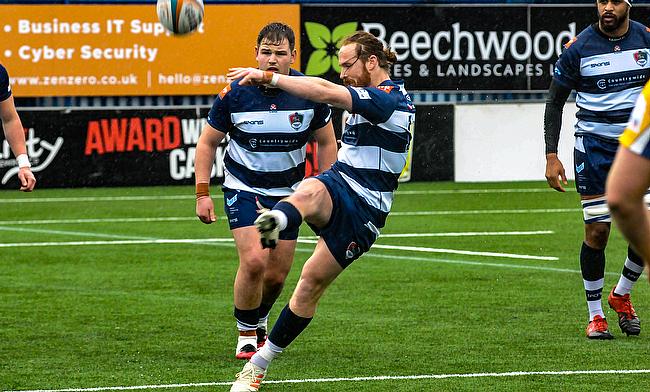 France wants safety assurances from England and Ireland for Six Nations
Opinion: Vanishing van der Merwe a blow for Edinburgh, but Watson was a key man they just couldn’t afford to lose
Quick Guide to the Six Nations Championship
Rory Jennings: It is going to be unchartered territory next year

It was at the beginning of November that Rory Jennings' move to France was announced.

With the start date for the Championship seemingly being pushed back week by week, Jennings was keen to be on the field and playing the sport that he loves.

Finishing as joint-top points scorer in the competition on 112 points, along with Ampthill’s Louis Grimoldby and Doncaster’s Sam Olver, it was originally Pro D2 that came calling for the Englishman.

Travelling to Nièvre to trial for Nevers following their injury troubles, Jennings was then notified of Clermont Auvergne's interest in his services and it was an offer he couldn't turn down.

The fly-half was immediately involved with the two-time French champions, coming off the bench to make his debut in an away loss to La Rochelle back in November.

“It is such a great club with such a massive history,” Jennings told TRU. “I have joined in a slightly different paradigm with Covid, so I haven’t experienced the famous crowd, but in terms of being here and being amongst the squad, it has been great.

“You have to look at the squad and see the experience the players have and how many players have been there and done it. It has been great to be amongst that and learn from numerous different players and share their experiences.”

In Fabien Galthié’s 37-man France squad that was announced earlier this week, just one Clermont player has been selected to represent the country in the Six Nations. This comes just a number of weeks after several members of Franck Azéma’s side were used in the Autumn Nations Cup campaign.

With fly-half Camille Lopez seemingly out of selection contention since the World Cup in 2019, Clermont are able to field a first-string squad every Top 14 weekend. Currently sat in eighth position, with two games in hand, Lopez has been a star in domestic competition.

Hardly missing a kick at goal this season, Jennings is more than aware of the fight he has got on his hands in order to get more opportunities with the first team.

“My first week I got here, I was involved,” Jennings said. “Just to get chucked into the deep end, I preferred really rather than just waiting. From there on in, it has been a case of getting to grips with the transition so the language, the style of play, which are imperative for my position.

"It is more a case of easing into it and then, when I get the opportunity, I’ll be ready and on top of that. Camille Lopez is having a stormer at the moment too, so I can’t expect to jump ahead of him when he is playing like he is.”

This weekend, Clermont were originally scheduled to be playing Munster in Limerick, but following discussions between the EPCR and LNR, European competition has been postponed, with the French Government recommending that for January at least, the Champions Cup and Challenge Cup should be put on hold.

There were calls to bring forward rounds seven and eight in the Gallagher Premiership due to the absence of European rugby, but PRL confirmed on Monday that wouldn't be the case.

In France, things are different as the Top 14 have decided to play fixtures that were postponed as a result of Covid-19 earlier in the season.

Clermont will be making the trip to Bordeaux-Begles this weekend. Then, they will host Castres in a regulation round of fixtures moved forward from March 20th to allow clubs access to their players before releasing them for the Six Nations.

Having been a part of the Bath Academy, where he came through the ranks with the likes of Charlie Ewels and Max Clark, Jennings will have plenty of friends who will be finding something else to do for two weekends whilst he and Clermont have competitive fixtures to prepare for.

“I prefer it really,” Jennings said. “I’d rather be keeping up the momentum of the season. I imagine some boys in the Premiership might think a two-week break will be great, but personally for me, a two-week break would do no good for me, because I haven’t really played.

“I would rather just crack on with it and also there has been a few cancelled games, so it gives us the opportunity to play those games in these weeks, rather than play them in a scheduled week off in the future.”

With plenty of rugby still to be played this season, Jennings hopes to see his involvement with Clermont increase.

“I think just continually adapting to the French way of playing, not necessarily the style, but improving my skills, my language skills and keep training well will hopefully be good for me,” Jennings said. “If you get that opportunity and you don’t play well, then you can’t really complain, but the way to crack it, I guess, is to keep patient and keep your head down and keep working hard which I am doing.”