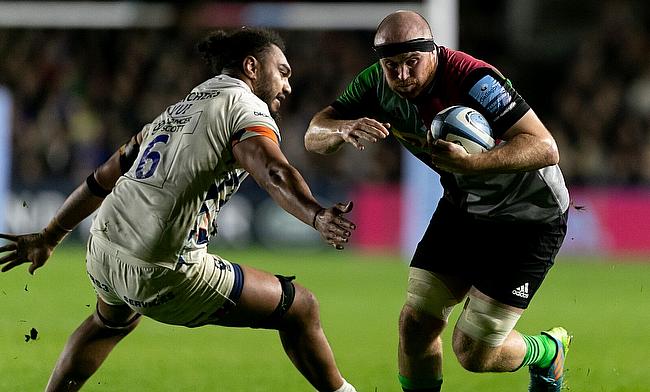 When James Chisholm linked up with Harlequins’ first-team squad, it was just two years after the club had won their first Premiership title.

Now eight years into his senior career with the quarters, he and his teammates are once again riding high. Having picked up all the points available to them in the three games they have played this season, the West Londoners sit three points behind Leicester, who lead the Gallagher Premiership.

This Friday night, the club will make the trip to Greater Manchester where they will face Sale Sharks at the AJ Bell, just seven days after a breath-taking comeback against Bristol Bears.

Scoring 45 unanswered points in the second half, having trailed 24-7 at the Stoop, Chisholm came off the bench with 28 minutes left to play to help consolidate the resurgence.

In many ways, it was reminiscent of the Premiership semi-final the two sides played out at the tail end of last season, with Chisholm himself scoring a try in that contest as Quins reached Twickenham.

A week later, they faced Exeter Chiefs at England HQ. The 26-year-old started at blindside flanker that day and revelled along with his teammates as they lifted a second domestic top-flight title in Harlequins’ history.

Looking to outscore their opposition with apparent ease is one of the hallmarks of the team’s good form, which has meant they haven’t controlled a game from start to finish. It is something not lost on players, but given their positive results, there is always a belief that Quins will come out on top.

“I have never really felt like this until the last six months,” Chisholm began. “Watching from the bench especially, I just think we’ll be fine. You are just sitting there like; ‘oh, it doesn’t matter, we’ll be alright.’ 21 to whatever down we were (against Bristol), you just think we are going to be okay. At half-time, it was pretty flat, but you got the feeling again that we are going to be fine.

“I felt like the momentum when I was on, it had just completely shifted, and we felt that we were going to win and run away with it, and I have never really felt like that before in the eight years I have been here.

“I think winning breeds winning and it breeds winners. For a lot of those guys that go out, it is never say die. We play our way and if it doesn’t work, then so be it. That is actually such a great way to play, and we have a plan and stick to it. I know the plan is a bit mental, but we have got a plan and we stick to it.

“It is just the belief. Everyone is so close. Everyone believes in what we are doing and how we are doing it. We get looked after, so everyone is in good spirits, so it is easy to think like that.”

Part of what made the Harlequins story so intriguing was the departure of Paul Gustard midway through last season and it led to a reshuffle in the backroom.

Billy Millard oversaw the coaching group, whilst Jerry Flannery, Nick Evans and Adam Jones took charge of training and focused on developing the side on the field. Now, Tabai Matson has stepped in as Head Coach, allowing Millard to move back to his General Manager of Rugby position.

Outside of Matson’s appointment, not much else has changed. The team still plays with the same gusto and vigour, with the players directing much of what they want to do. The player-led environment has created headlines, too, with the coaches moulding their team around the best attributes of each individual.

“The way we have done things is very much player-led and the coaches just facilitate what we are doing,” Chisholm explained. “Ultimately, we are the experts. We are out there every day, training, and out there every weekend. They just let us get on with stuff and solve problems and shape the way we are doing it.

“That leads to a massive buy-in because we are the architects of what we are doing. Marcus (Smith) and Tommy (Allan) look at the attack, Simmo (Matt Symons) and Stephan (Lewies) with the lineout and the trick plays, that kind of stuff. It all cements the buy-in because it is our stuff and we are doing it. We are going out there and solving these problems.

“We have got really good people at the club and that is more important sometimes than having good rugby players, which we also have. Your leaders, in Stephan, Dom (Alex Dombrandt) and Marcus, are the captains and the playmaker, they are good people, and everyone will buy into what they are chatting about and put their body on the line for people.”

But coming to the conclusion that letting the players have a firm grip on the reins is intriguing. With club stalwarts like Danny Care and Joe Marler coming to the fore, leading culture and driving standards, it is noticeable that Adam Jones and Nick Evans, in particular, called the pair teammates not too long ago.

With this combination proving to be the winning formula at present, Chisholm believes there is very much the perfect ecosystem at the Stoop right now.

“Rugby is a pretty simple sport. You do need very good players and you need physical players, which we have, and everyone has those. It is just then facilitating the people that you have.

“Coaches have got strengths and they have got weaknesses, that is normal, but where they have their weaknesses, that is where the players step in. There is discussion, there is freedom to change things and have that ability to take ownership for our own stuff, which is so, so powerful and I have never experienced that before in a Harlequins jersey.”

In Eddie Jones’ latest 45-man training squad, seven Harlequins were named in that group. With the likes of Jack Kenningham and Louis Lynagh, in particular, coming to the fore in the past year, some of the depth that has been created at the Stoop has the potential to be missing during the Autumn period.

This could even include both Smith and Dombrandt spending time away, and with Marler also recalled, a significant chunk of leadership could be missing. This was not the case last season, and it might prove to be a trying time for the team.

“It is difficult because the depth is really good at the club which is great,” Chisholm said. “We have two Lions, in different positions. We have got a couple more guys capped in certain positions.

He hasn’t had a bad year has he…

“You do miss those guys when they go, and time will tell in that November block. The Six Nations is always one where in previous years we have struggled, because we have had too many internationals, basically.

“For the personal success of my friends, I want them to achieve caps and to get the rewards they deserve, but from a selfish point of view, you want people to stay behind so we have got the best team possible.

“In saying that, I really believe that now we have got the squad to be competitive in any period throughout the year and to get wins and get points. I really do.”

One of the questions asked of a team not long after they have success is;’ What will they do next?’

The most important question that has been asked of Harlequins, and will continue to be asked is, ‘Can the club stay on top with their penalty shootout mentality of winning games?’

In an interview with TRU, former Harlequin and current Newcastle Falcons defence coach Nick Easter said he was looking for more balance in the game, with more tries on average being scored as time moves forward.

“We are always going to be remembered for how good our attacking game is and how mental it is,” Chisholm said. “It is not like we neglect defence. I am a player that is very interested in the coaching of defence and defending whilst I play, but the mentality of the lads, especially the young lads, is that we are going to outscore you.

?? Three changes for Sale Sharks away

“It is just who we are. Is that going to be good enough against your Saracens and your Leicester Tigers this year? Possibly not, but you never know.”

It is not as if there aren’t more exciting things to come for Harlequins in the coming months. Among other things, there is the Big Game at Twickenham and the Champions Cup getting underway in early December.

Add to that a solid start to the season, it feels as if this chapter of the club’s history is still being written.