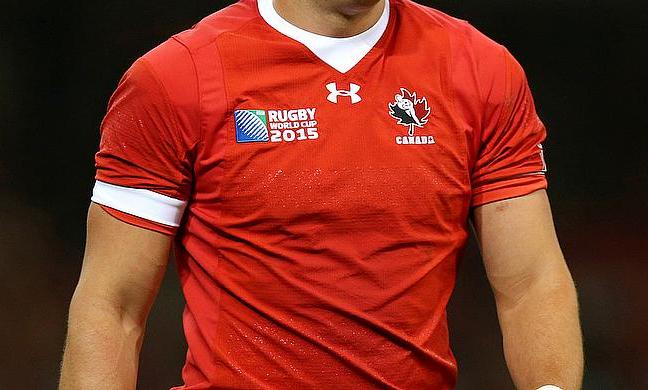 1991 was truly the highest that Canadian rugby has ever been.

Progressing out of Pool 4 at the Rugby World Cup, the Canadians wouldn’t make it much further than the next stage of the competition, falling 29-13 to New Zealand in the knockouts.

That team is still fondly remembered today and it saw the emergence of a raft of previously unknown talent. The likes of Mark Wyatt, Gareth Rees, Al Charron and the late Norm Hadley became familiar faces with several going on to represent clubs in Europe at the advent of professionalism in the mid-90s.

For Scott Hobson, he was barely three years old when Canada experienced the biggest moment of their history on the world stage.

Born and raised in Cornwall, Hobson would go on to become one of the most highly thought of youngsters in England after establishing himself at Cornish Pirates in the Championship, before moving into the Premiership to play for Bath.

Following eight first-team appearances, the former lock suffered a career-ending injury in 2010 and after two years of painstaking rehabilitation, he decided to call it a day on his promising career.

Playing on several occasions for the England U19’s, Hobson says that he always had his sights set on representing the country of his birth but knew, thanks to his Canadian father, he also had the option of pulling on a red jersey.

“I had dreams, aspirations, of playing for England, but I always knew that if that didn’t go the right way, Canada would be an option for me,” Hobson said. “That’s when I made the initial contact with Rugby Canada, but subsequently I retired before my career even took off.”

Now aged 32, Hobson has been charged with identifying players outside of Canada, who like himself, are eligible to represent the nation. Making contact with Rugby Canada during the first lockdown, the Head of Rugby at Bryanston School was fortunate that his enquiry came at a time when the union were restructuring.

Working with former Canada back-row, Adam Kleeberger as well as over 50 scouts across Canada, they will be looking to support both the men’s and women’s programmes ran by Kingsley Jones and John Tait.

In order to represent Canada, players must fit at least one point on the following criteria:

-       One of the players’ grandparents being born in Canada

“It has been really positive,” Hobson said, when asked about the reception to the ID programme so far. “It is really helpful that there is not a perception that it is an Exiles programme. This is a performance pathway. It is about supporting as many aspirational rugby players as possible.

“At the moment, it is about making more and more people aware of it, to get people talking. Lots of aspirational players in the UK will be on performance pathways, but it is well known that there are loads of entry and exit points along that route and Rugby Canada should be perceived as an opportunity as well.

“That could lead to an opportunity to be within a professional environment in MLR or alongside studies at a university that they maybe had never thought of previously. I think it is really exciting.

“We have had a number of players reach out, but what is really exciting is the number of coaches and people involved with the game that have reached out and I think that is something that should be continued and pushed if people are looking to support Rugby Canada.

“To have more coaches talking pitchside, in the clubhouses, finding if more players are eligible and speaking to individuals about these opportunities, it can only help open up an opportunity to someone that didn’t realise about this previously.”

Whilst the Talent ID set-up is not an Exiles programme, Hobson and Kleeberger find solace in the knowledge that Kingsley Jones has got a great grounding in the identification of talent, having headed up the WRU’s exiles programme in 2017 before taking on his role with Rugby Canada.

Of course, it is also not the aim of Rugby Canada to be fielding an international squad of players who have all been born on foreign shores. The ambition of the programme is to aid the rugby development of the country as they hope to recapture what could have been after their heroics in 1991.

“I have had chats with Kingsley Jones and he is really interested in the programme because of his involvement previously with the WRU.” Hobson said. “If any players in the UK, in academies or first team environments put their hand up and say they are available, he will be willing to talk to them and open a dialogue with players and be involved with that process.

“More than anything, there is a need for coaches and people in the game to be supporting Rugby Canada. I think that is the most important message for me to promote at the minute. Players will always be there for selection, but to have more people on the ground talking about Rugby Canada is the main thing for me at the minute.”