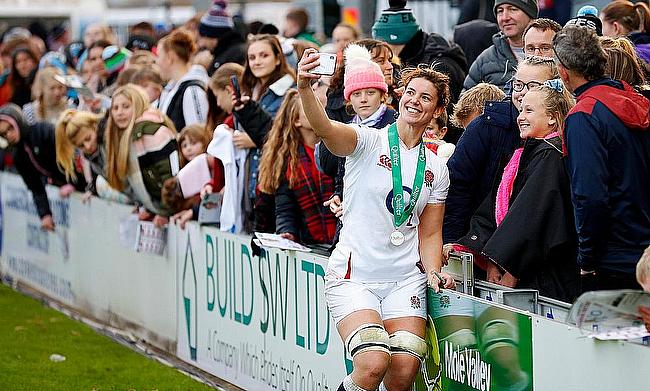 Exclusive: TRU Q&A with Red Roses star Ellie Kildunne
Exclusive: Mullen and Harlequins building in the right direction after eye-catching start
Exclusive: Katy Daley-McLean - “We now have the opportunity to go to Italy and finish with a Grand Slam
Nelson: Scotland ‘can’t take foot off the gas’ after France draw

So the Rugby World Cup pools have been announced and England are going to be playing France, Fiji and South Africa in Pool C. What's your reaction, Sarah?

SH: It's funny. I was speaking to my Mum this morning and I had a gut feeling we'd be playing France. It's one of our rival teams who we have regular encounters with. They're so entertaining for a neutral and I've got no doubt it'll be the same at the Rugby World Cup next year.

We played them in the semi-final in the last one and it's probably one of the most physical and demanding games that I've played in so we know what to expect but knowing the French, they'll bring something different that we haven't seen. It's so exciting and as players, you want to be challenged and want to be playing the best teams that there are and France are definitely one of those. If we want to win the World Cup, we're going to have to play the best teams along the way and win them so if they're in our pool then that's our task.

How important has it been to have the Red Roses televised on the BBC, Sarah? Do you see it as an opportunity to encourage more casual viewers?

SH: It’s been huge. People like to watch something they are familiar with like watching someone’s story or seeing a rival team play. They’re familiar with New Zealand v Australia and the USA v Canada. We don’t know who are in the other pools yet but I think that will make for some other exciting rivalries and great games to watch.

Hear from @EmilyScarratt following the #RWC2021 draw which placed the #RedRoses in Pool C alongside Fiji, France and South Africa... pic.twitter.com/XsXn21AcuK

You have your home support but you want to be bigger than that and have people support women as a whole. We want people to tune in to watch England v France because they’re in our pool but also for fans to tune into New Zealand v Australia because they’re both fantastic teams and are good to watch as a neutral. As a player, I can’t wait to watch some of the teams going head to head as I enjoy watching good rugby as well as playing it.

On reflection, how do you think the year has gone? Are you happy with where you are as a squad Sarah?

SH: Yeah, definitely. When you look back to at the start of January, I don’t think anybody thought the year would turn out like this in any shape or form whether that’s in sport or in life in general.

I think we definitely set targets at the start of the year, though, and wanted to be Grand Slam champions and back-to-back which we did! It took a bit longer than planned but Simon and everyone who is part of the team management have done a fantastic job in terms of managing our pandemic time and continuing to put in all the hard work in February and March to finish the Six Nations. We were due to have a tour to New Zealand but that was cancelled because of Covid, however, the team didn’t mope around and didn’t use it as a time to do nothing. We used it as a time to gain some game time and were given the opportunity to play France this autumn.

It’s also allowed us to experiment using different combinations with new players coming into the squad and really develop breadth and competition for places that might not have happened if there hadn’t been a pandemic so there has been some real positives from it.

I think how the squad have managed to cope and still manage to perform as professional rugby players in a pandemic is testament to the programme we have and hopefully, we will finish the job on Saturday. We’ve ultimately come out of it the other side and yes, there are always things to work on but we’re in a good place going forward.

What can you say about this current Red Roses side and why are they so good Simon?

SM: They’re a fantastic group of girls. The young girls that come into camp these days arrive with so much energy and bring so much enthusiasm to the squad. It’s great with this particular group and they’re a joy to be around. They keep you on your toes as well and they’re full of strength in depth. We can probably say why they’re so good after the Rugby World Cup! They’ve got a great strength and conditioning programme, they’re incredibly physical and their understanding of the game is wonderful.

How important will next year’s World Cup be in continuing to grow the women’s game, Sarah?

SH: It’s huge. We saw the rise in the number of females who began taking up the sport in 2014 and the increase in television views in 2016 which was massive for our sport. The ultimate goal for us is to not only win the World Cup but to create a legacy and not just in women’s rugby.

We want to be the people that inspire the next generation whether that’s boys or girls, fans, people wanting to get involved in volunteering at grassroots level or people that want to broadcast it. We’ve got a massive part to play in what happens at this World Cup and on a wider scale. It’s a huge part of what we want to do and that will come with us performing well and hopefully us going on to win the World Cup in New Zealand. If we can encourage the next generation, then that’s a pretty exciting thing to be involved in.