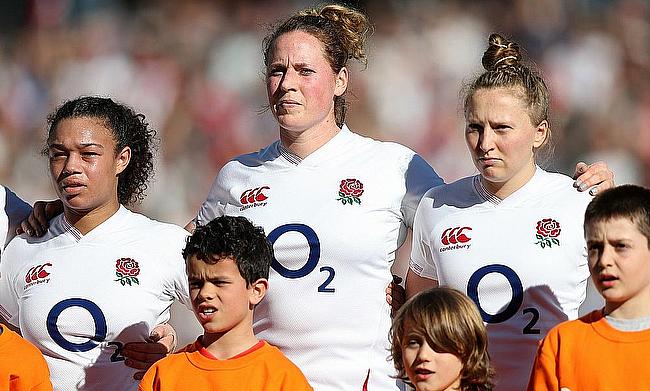 It is almost a given that the Six Nations is a topic which is on everyone’s lips at the beginning of a new year, but in 2021, it isn’t necessarily for all the right reasons.

Quite how the championships will pan out over the course of the next few months remains uncertain due to the global pandemic.

The men’s competition is still going ahead as planned, but England’s preparations to retain their title have already hit a stumbling block with Eddie Jones, Simon Amor, and Matt Proudfoot all having to self-isolate because of Covid-19.

It seems any excitement which is usually generated by the tournament continues to be overshadowed by the virus and this is the case for the Women's Six Nations. The competition was postponed last week due to the challenges presented by the coronavirus and organisers are now aiming for a spring or summer start.

Whilst this news may have dampened spirits amongst players and supporters alike, in some circles, disappointment was quickly replaced by optimism and a sense of opportunity.

However, rather than multiple headlines focusing on potentially a unique selling point for the women’s game, trolls on social media unfortunately became the story.

Sky Sports’ post regarding the rescheduling of the Women’s Six Nations was met by comments such as “nobody cares”, something which sparked Bristol Bears’ fly-half Elinor Snowsill into action.

In response, she took to Twitter and posted #icare, a hashtag which is now being used within the sport and further afield.

“It is frustrating, especially in the current climate, because some positivity is what we would need right now,” England international Amber Reed told TRU.

“For us to still have that tournament, all be it later in the year, it is huge for us and it gives us something to look forward to. That shouldn’t then be overtaken by negative comments by people who feel they need to post unnecessarily and in response to a news article online.”

Reed, who is a club teammate of Snowsill’s, shared her own thoughts on social media which focused on why the negative comments could affect the next generation of rugby players.

Whilst she feels the spiteful online messages could harm the future of the sport, campaigns such as #icare has enabled players to turn it into a positive.

She added: “The opinions of others are hugely influential especially on the generation coming through. Social media is now easier to see, and everything is more available in your everyday life. I know I am bad for it. I will pick up my phone and scroll through Instagram and Twitter and have a little look, but I think social media can be great in terms of promoting a positive image.

“A lot of us England girls and other internationals, not only do we want to be the best we can be to reach our dreams, we also want to show that it is possible for the next generation growing up.

“It is not always going to be sunshine and rainbows and everything is great with the world, but especially in the current situation with the #icare and #IAMENOUGH campaigns coming out, it shows that people are starting to listen.

“If people continue to post negative messages, we’re not going to stand for allowing you to have your voice from behind your screen.

Brilliant article by @Charlie_Beckett on women’s rugby which applies to all women’s sports and has sparked a #WeCare social media campaign. Make a noise ladies. We want people to hear us. #ICare ???? https://t.co/qfblTJA9yD

“We’re going to stand up for what we believe in to then inspire the next generation to make it easier for them to come through. Hopefully in a few years, when they are in the same position, they are not then having to deal with these comments because people have realised that it doesn’t create a positive world or a positive environment for people to thrive.”

In Charlie Beckett’s recent column for Talking Rugby Union, he highlighted the sacrifices which all sportspeople have to make to pursue a career as an elite athlete, but in women’s rugby in particular, the balance between playing the game and earning an income is a constant battle.

Before the RFU offered Reed a full-time contract in 2019, she was juggling top-flight rugby with her job as a teacher.

Back in 2014, the centre won the World Cup when England were an ‘amateur’ side, but the reality is the majority of players currently on the international stage are still combining rugby with their day-to-day lives, something which clearly didn’t cross the mind of the online trollers.

“Playing for Bristol, we have got a huge Welsh contingent and you can see first-hand that balance,” Reed said.

“I have been in that position where I have had to teach alongside balancing a career as an international athlete and it isn't easy so I feel really lucky to be able to do it as my job now. To see these girls struggling and making sacrifices and to then see negative comments from people behind keyboards who don’t understand is difficult.

“They don’t realise the work and effort you put in. Sometimes you miss birthday parties and weddings. You don’t get to see your friends and family and things like that so they are big sacrifices, but you choose to do it because it is something which you dream about doing; going to play for your country.

“It is not necessarily people feeling sorry for us for the sacrifices we make because ultimately those are our choices, but we are putting everything we can into being the best we can be in order to achieve our goals, our dreams to play at the top level and clearly, some people don’t realise that.”

Standing up to the online trolls hasn’t been limited to just people within the women’s game. World Rugby CEO Sir Bill Beaumont showed his support for the campaign by championing Reed’s former international teammate Katy Daley-Mclean whilst Saracens’ Ben Harris also tweeted his backing of the #icare movement.

Ideas on how to tackle the stereotypes which still exist in the sport continue, with rugby commentator Nick Heath suggesting that more high-profile figures in the men’s game could take a stance and #icare themselves.

Women's rugby players don't 'need' men's players but while many of these apparent "I don't care" social media trolls seem to be following rugby pages / accounts to begin with, it might help if more high profile men's players showed some #icare support for the women's game.

This is not the first time female rugby players have stood up for their sport and Reed hopes with the help of the rugby community, they can continue to break down the stigmas around the women’s game.

“It would be creating that equality,” Reed continued.  “A lot of the people that troll through social media are more likely to follow the men’s players then they are to follow us. If they are writing a comment about ‘Who cares about the Women’s Six Nations’ they are very unlikely to follow any of the players.

“However much we post and we try and influence others for the good, if they don’t ‘follow’ you on social media, they are not going to see that so for the men’s players getting on board and for them to post, it allows us to reach a bigger audience with the message we want to try and send out.

“It shows that unity and I think rugby is, and can continue to be, a really strong platform for that.”