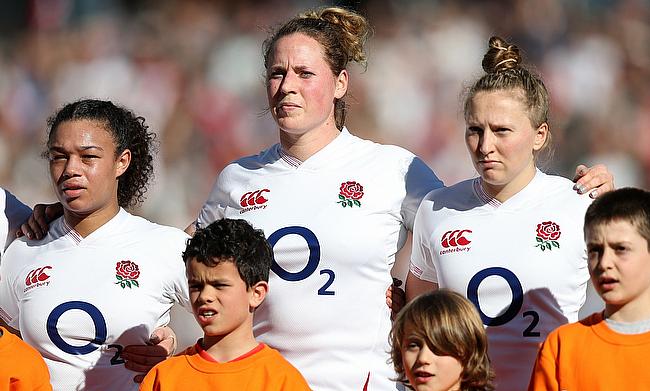 Red Roses Looking Forward to Sell-Out Doncaster Clash
Shaunagh Brown: “I’m just a kid playing rugby in my head still”
The Year of the Rose - Q&A with Sarah Hunter
Natasha Hunt: This is the start of another World Cup journey

"I don’t normally count caps, but I was stuck on 49,” jokes England and Bristol Bears centre Amber Reed ahead of the Red Roses’ Six Nations clash with Wales this weekend.

Reed is referring to last summer when she returned to the international set-up following a lengthy injury. The 28-year-old was back in action in June before she finally made her 50th appearance against the USA in the Super Series.

“Every game is just as special as the last one when you get to put on an England shirt so to be stuck on 49, I admit, I was a little bit frustrated!”

For Reed, who received her full-time contract back in September, featuring in all three of England’s Six Nations games so far has certainly helped her shelve that ‘frustration.’ Numerous injuries have continually hampered her progress for the Red Roses and her latest setback saw the 2014 World Cup winner miss the autumn internationals.

Excited for another opportunity and to put last season behind me ??

Thank you to @colstonsschool for all your support over the years ????#RedRoses #Grateful #Graft #HWPO #ProLife #Teaching #OC https://t.co/0Q1XJRmVCg

“It has been my first Six Nations for a while because of injury but to miss out on the autumns, I was gutted,” Reed says. I was playing really well for my club, but I missed out on that.

“It was then just about being able to play rugby again. That was the goal that I set myself. Just being able to go running or to do some physical activity and to be back on the rugby pitch, was the stepping stone and the motivation I needed. Once I got to that point, then I was looking ahead to what I could do for Bristol to get back in contention to be in a place where I could be selected in an England shirt and benefit the team.”

This weekend, Reed has been named in Simon Middleton’s starting XV for the third consecutive game but last year, the centre was faced with the prospect of possible retirement following another back injury. In an interview with the RPA, she admitted she was in a ‘rough place’ and struggled to come to terms with potentially not having an ‘end goal’.

Recently, Reed has become an ambassador for the foundation, LooseHeadz, which aims to tackle the stigma of mental health in rugby and after suffering and experiencing challenges in her career, the England international was keen to get involved.

“Raising awareness of mental health is something that I have been really passionate about, especially over the last couple years,” Reed says. “Growing up, I probably didn’t pay too much attention to my mental health and I was always the person who thought I was resilient, could cope with anything and didn’t want to push my problems on to someone else.

“You don’t really realise how important other people are and how important talking about it is, even though it might seem difficult at times. It does make a massive difference when you are stuck in a bit of a rut and you can’t get out and it is what I have felt like over the last couple of years, in patches.

“I have had an amazing support network around me who have helped me along the way. If it helps one person being an ambassador for Looseheadz, then I am quite happy with that.”

Amber Reed is a LooseHeadz ambassador ?? @bristolbearswomen and @englandrugby Women centre is joining us on our mission to #TackleTheStigma of #MentalHealth - “Honestly looking after my mental health is not something that I’ve been particularly good at. I’ve always perceived it as a sign of weakness. You feel you always need to be resilient and tough and not let things get to you... but I was so wrong! If anything this mentality is even more detrimental. Over the last few years I’ve pick up injuries which I have struggled to deal with. I’ve felt really low, lost my sense of identity and isolated myself. That was until I started to admit that I wasn’t coping. It was tough at first to open up, but being honest and talking about how I felt started to make things seem a lot let daunting and I felt like I was no longer alone. It’s not a sign of failure and if anything it’s a sign of strength to face your demons. The stigma of mental health is still out there and I’m excited to join up with Looseheadz as an ambassador to tackle that. It’s ok to not be ok and you don’t have to go through it alone, there are always people out there, like looseheadz, who want to help.” - @avreed12

Reed has been on a personal journey since winning the World Cup six years ago and during that time, she has also witnessed the landscape of women’s rugby in England change dramatically.

Since the RFU introduced full-time contracts at the beginning of 2019, the spike in performances and results from Middleton’s side has been impressive. Alongside their progress, England’s appeal has grown, highlighted by record attendances across the country, and Reed was quick to acknowledge that the game is heading in a positive direction.

“It has massively improved from where it was and the crowd in Doncaster [v Ireland two weeks ago] was absolutely fantastic,” Reed says. “You can definitely feel that energy on the pitch and it spurs you on.

“There is still more room to improve, though. I think the football model is a really good one. They have sold out Wembley only recently and that is kind of where the women’s game needs to aspire to get to for us to maybe fill out Twickenham or something like.

“I am not saying it is going to happen next year, but those are the aspirations we need to have and all of us as players have a massive part in taking the game forward because we are role models. We want to promote it and speak to fans to put on a good spectacle that people what to come and watch and to encourage the next generation.”

Ahead of #InternationalWomensDay @MC_kennaS @NHunt09 and @ShaunaghBrown discuss competitiveness, body image in rugby and being role models ??

Viewers of the Red Roses’ performances during these Championships should be inspired as England continue to dominate the northern hemisphere, but whilst results have been ideal, logistically for the players, it hasn’t been a smooth ride.

Last month, England’s fixture against Scotland had to be rescheduled due to adverse weather conditions whilst on Thursday, it was announced their final match of the Six Nations away in Italy has been postponed due to the coronavirus outbreak.

“It has been an interesting Six Nations and I have not been involved in one like it!” Reed says. “We do pride ourselves on being adaptable when it comes to situations which are out of our control.

“You can’t always control everything that goes on around you whether that be logistics or things like traffic on the way to matches. For us, it has almost become part of our preparations that everyone is ready to go at any given moment and I think a big thing that has been driven forward for us over the last few years is knowing ourselves and what we need to do to get in the right places to perform and how that might change if circumstances do.”

As things stand, England’s clash with Wales on Saturday lunchtime at the Stoop could be their final match of the Six Nations and securing a victory would also be another significant milestone ticked off the list with next year’s World Cup beginning to edge into view.

The Red Roses have pretty much been serial winners over the last 13 months and Reed admits there is always the constant need to raise the bar within camp, with New Zealand 2021 now the main goal for Middleton’s side.

“We are always trying to drive the standards and as Midds said after the Ireland game [27-0 win], as players, we were all frustrated with our second-half performance,” Reed explains.

“We left a lot of points out there and that is something we are looking to rectify going into the Wales game and having that 80-minute performance.

“It is a bit of a cliché, but it is something we pride ourselves on because when you get to tough games at the latter stages of big tournaments and World Cups, you are not going to get many opportunities so if you don’t take the points like we did in that Ireland match, then that could be the difference between winning and losing the game.”

This Six Nations has provided a welcome and consistent return to the international fold for Reed. Two World Cup final appearances on her CV, despite hitting several bumps in the road, is very impressive but for one of England’s current stars, she is more than aware that she must focus on the here and now before a third World Cup can enter her mind.

“Obviously that would be really nice to get to the World Cup! It is something I will aim for but again and with my injury history, it is just about looking ahead to each game and making sure I can get out on the pitch. On the training pitch, I just need to get better and need to keep learning because that is going to put me in the best place for the World Cup selection next year.”