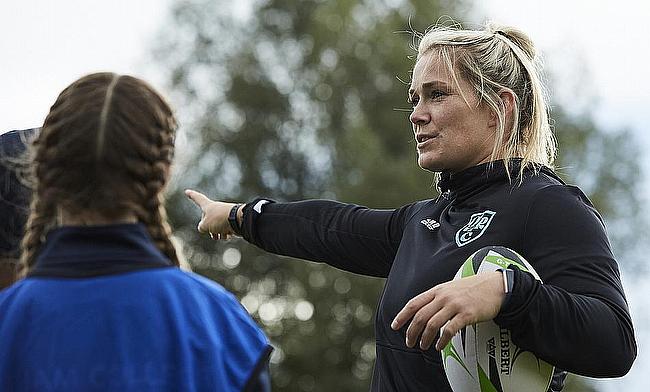 France wants safety assurances from England and Ireland for Six Nations
World Cup 2021 Squad Selector: Which Red Roses are in the frame?
Exclusive - Rachael Burford: “We want to showcase our role models in the game to help inspire others”
Burford: We need clubs to be ambitious. We can’t sit still.

The intense build-up and anticipation which usually surrounds a major sporting event continues to feel like a distant memory, and in rugby, that feeling is becoming all too familiar.

With the pause button pressed on the Gallagher Premiership, both European competitions and the Allianz Premier 15s, the sport has almost come to a halt once again.

So far this season, we have seen some jaw-dropping and exciting moments in those aforementioned competitions, but very few tournaments generate an energy and a fanfare quite like the Six Nations.

As it stands, the men’s championship will begin on February 6th but given France’s sports minister is seeking reassurances from British and Irish governments over Covid-19 containment plans, there is still an element of doubt hanging over one of the showpiece events in the rugby calendar.

However, for the women’s competition, the concerns about the increasing rate of coronavirus, the lack of testing and the complications caused by the pandemic mean the tournament has been delayed, with organisers aiming for a spring or summer start.

This year's Women's Six Nations as well as the U20s Six Nations have both been postponed due to Coronavirus with the rescheduled dates to be confirmed by the end of January.

More details can be found on our website below.

“I think it is definitely the right decision considering the vast majority of players who play in that competition haven’t played much rugby,” 2014 World Cup winner Rachael Burford tells TRU.

“The only league that has been going ahead is the Allianz Premier 15s so for a lot of players across all the nations, they haven’t had opportunities to prepare.

“I do think it is the right thing for where we are with Covid and the travel which would have to be involved. There is also that realisation that there are many people who work in critical jobs playing for the nations.

“There are a lot of servicewomen in the game and those are jobs that don’t stop during the pandemic. Those are the key roles which people do and they would never want not to be able to go to work just to play rugby, so it does put them in a really tough position. It is a tough situation for a lot of people who do have full-time jobs or even those in full-time study.”

The announcement regarding the postponement of the Women’s Six Nations dropped on Wednesday afternoon, but as Burford and ScrumQueens founder Alison Donnelly discussed on the latest Women’s Rugby Podcast, the timing of the statement was criticised.

As Burford alludes to, many players have full-time jobs to focus on, but up until Wednesday, they were still planning their lives around the Six Nations which was set to begin in three weeks.

The Harlequins star can sympathise with the frustration many may have felt due to the lack of clarity and Burford herself even received text messages from fellow players who were searching for updates.

“Look, my guess would be the organisers were trying to explore every avenue to try and make the Six Nations happen next month,” Burford added.

“I think what has been frustrating is that lack of open transparency. All that was maybe needed was the organisers to say they were looking at all the options and they will come to a decision as soon as they can because there are players that genuinely want to make decisions about their life.

Great listen from some of the biggest and best brains in #wrugby. @RachaelBurf12 said it- @ScrumQueens is still the best resource for everyone in women’s rugby and it is run by two volunteers (aka heroes @AliDonnelly & @johnlbirch) https://t.co/OeWzsWpdOF

“I feel for the players because it is such a horrible dilemma. They all want to play for their country and in a World Cup, but at the same time, that doesn’t pay their bills and it doesn’t bring in an income which is going to be secure for them. Players are anxious. They are worried about what is going on and they just want some clarity.”

Six Nations organisers have said an update regarding the women’s championship will be issued at the end of January which Burford describes as “perfect messaging”, but despite the negativities surrounding the announcement, the tournament's rescheduling does present exciting opportunities.

Ben Morel, CEO of Six Nations Rugby Limited stated they are “fiercely committed to the promotion and development of rugby at all levels, particularly the women's game, where we see exciting opportunity for growth".

Burford believes moving the competition away from its mandatory February-March window could increase the exposure of the women’s game as they won’t be competing for the same airtime and coverage as the leading men’s internationals.

“Normally the people making the decisions are probably watching the men’s tournament and actually, there is now the opportunity for them to be able to be a spectator of the women’s game because both England v France fixtures for the men and women aren’t kicking off at the same time, on the same day, for example.

“In terms of broadcasting, we haven’t got to fight for the same channel or for the same timing or to be put on at 11am on a Friday! It does pose all of those great opportunities for fan engagement and for the growth of the women’s game.

“There is the potential as well for the sponsorships which are already involved in the Six Nations not to spilt their time or their resources over one weekend. That’s almost even better for them because they have got a whole package of Six Nations in February/March and six weeks later, they have got it again so it is even more visibility for them. All of these are opportunities to grow the women’s game as a whole and build momentum going into the World Cup.”

For Burford, she is looking at the opportunities alongside the bigger picture. With the World Cup scheduled for September in New Zealand, it is a big year for women’s rugby and she hopes the excitement which could be generated by the Six Nations can have a positive impact on the grassroots game.

Lockdown Squad dates for your diary ??

Don't forget to register at https://t.co/CTKI7O6mie to receive our early bird discount! ?
?
These sessions are for the whole family, all ages & all abilities, so everyone can get involved in keeping active and staying healthy? pic.twitter.com/e4DPOLfrhG

With England currently under the tightest restrictions due to the increased prevalence of Covid-19, Burford has relaunched her ‘Lockdown Squad’ via the Girls Rugby Club.

During the first lockdown last summer, Burford’s fitness and skill videos went viral on social media and as part of the Girls Rugby Club, an international pathway and platform which is aiming to connect with 2.7 million girls who play rugby globally, she has invited current Red Roses Leanne Riley and Jess Breach to lead two of her sessions over the next five weeks.

“I think with all the opportunities I mentioned, it does open community rugby up to engage more because there aren’t as many commitments when the Women’s Six Nations is now scheduled for,” Burford said.

“The opportunity to have the women’s game on will support the grassroots areas in girls rugby as well. We all do rugby because it is kind of our solace, our escapism so we need things to try and keep everyone positive and engaged wherever possible.

“For the Girls Rugby Club, obviously, we’d rather be doing face-to-face camps which we had set up, but what is the next best thing? We decided to do something weekly online and the idea was to bring in a couple of different people with a different skillset and different knowledge.

“Even though it is branded ‘Girls Rugby Club’ we get the whole family joining in. That’s what it is about. It is about getting moving, having a bit of fun and getting to be coached by somebody who you might not get the opportunity to learn from.

“The whole thing around it is that it is not necessarily just the physical aspect, it is also about mental wellbeing. We are trying to do bits and pieces that can support people and give a little bit back so hopefully we can do that.”