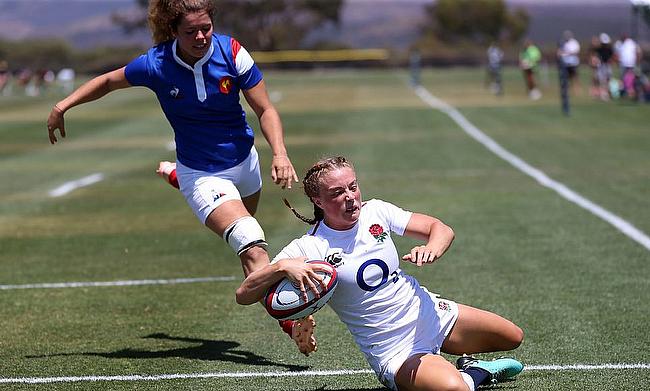 Emily Scarratt provided a vital turnaround with 10 points in the closing stage as England Women came from behind to complete a 20-18 win over France in the Women's Super Series encounter at Chula Vista Elite Athlete Training Center.

This is England's third win from as many games as they moved to the top of the table with 13 points while France are at fourth place with five points.

As Lydia Thompson struggled to collect a wayward pass inside England's 22, Cyrielle Banet punished the red rose team with the opening try coming in the opening minute but Jessy Tremoulière missed out on the conversion.

The response from England came in the ninth minute when Kelly Smith touched down but they missed on seizing the lead with Scarratt missing the conversion. France reclaimed the lead in the 23rd minute when Gaelle Hermet fed Caroline Boujard as she touched down and Tremouliere kicked a conversion and two more penalties to finish the first half with a 5-18 scoreline.

Scarratt helped England score the first points in the second half with a try in the 49th minute that reduced the gap to eight points.

As the final 12 minutes kicked-off, France were stunned by brilliance from Scarratt as she scored the decisive try in the 69th minute and followed with a conversion and a penalty to complete a two point win.

“At half-time we were little bit frustrated at the scoreline because we hadn’t played that badly,” Scarratt said. “It was about not getting too low on ourselves because of the scoreline.”