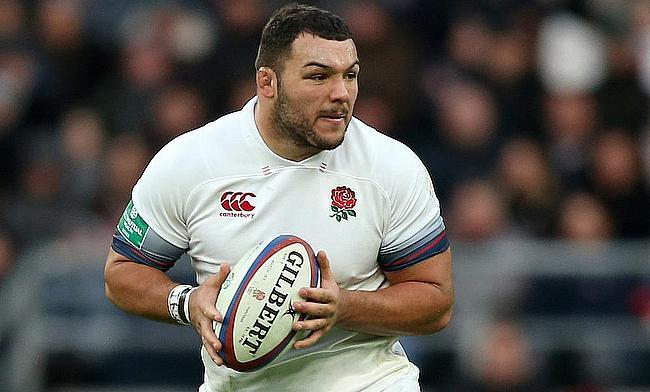 Ellis Genge made his England debut in 2016 against Wales
©PA

Joe Marchant Exclusive: “We don’t want to rock up and just be happy to be in the play-offs, we are going to Bristol to win”
Sam Simmonds clinches Gallagher Premiership Rugby Player of the Season award
“It makes you feel very proud” - Sam James: From Sale ball boy to Premiership play-offs
Kevin Sinfield to join Leicester Tigers as defence coach ahead of 2021/22 season

When Ellis Genge first popped up in the Premiership five years ago, the loosehead prop was described as a raw talent.

Props take their time to mature and Genge is no different. Leicester was potentially the best landing spot for a 21-year-old who was sent away by Bristol as the result of an off-field issue.

Not only away from home, Genge was suddenly interacting with established internationals Dan Cole and Marcos Ayerza. Such was Genge’s growth on a game-by-game basis, Eddie Jones called the front-row up to represent England that summer, gaining a first cap in May before going on tour to Australia.

Currently having 68 appearances for Leicester and 28 for England, the 26-year-old has been captaining Tigers of late, his lead by example attitude helping the side to a 38-31 victory over Wasps in the final game of the season.

With over 20 uncapped players in this current England squad, the group to be revised on Sunday following the Premiership semi-finals, Genge what leading his country will be like, but has enjoyed his time leading under Steve Borthwick.

“I enjoyed it,” Genge said. “I spoke to a few people in camp about leadership roles and how they vary, and I would say at club, I spend all year with those boys and some of them I have known for five years. So, it is a lot different leading in your club environment, where I know the ins and outs of those boys, I know what they want for breakfast.

“With a lot of the new boys, especially with a lot of them being uncapped, I didn’t know them very well so it would be a completely different challenge to captain a group that you don’t know well at all.

During the early part of his career, Genge received criticism for perhaps being too hot headed and ill-disciplined. This is an accusation that has followed the Bristolian throughout his career and is a label that was attributed to him as recently as March following England’s encounter with Ireland in Dublin.

But, for Genge, this is an undeserved label that doesn’t actually apply to him. There is a fine line between being passionate on the rugby pitch, wanting to better your opposition at any given chance, and being reckless.

“I do think perhaps people think it am a little more hot-headed than I am,” Genge said. “I feel I react to situations dependant on how they are unravelling in front of me. For example, I have never been red carded for ill-discipline, nor have I had a yellow for anything of that nature, besides repeat offences.

“I do think, for example, if I captain a side and people thought ‘let’s get in his head’, I do think it falls on deaf ears, but if people like to waste their time doing that and trying to put me off my game, carry on.”

Perhaps the big question is whether or not this label bothers Genge at all. Of course, he wouldn’t be given the opportunities he has if he weren’t a consistently performing player or a key contributor to the team’s cause, the loosehead reiterating his message of being relatively unruffled by some people’s perception of him.

“It does bother me a little bit, probably not as much as it used to,” Genge said. “It is probably a misconception of what people see me as. From my past it is relatively easy to accumulate that data and all the stories and articles written about me in the past and paint that picture.

“Especially for people that don’t follow my career relatively closely and they follow their own teams. Regardless of whether you want to or not, you go onto social media, and it is always ‘he’s too hot-headed anyway’, ‘he is too much of a liability’ and it makes me laugh a little bit.”

“Because I have never had reds or yellows for those sorts of things that they are talking about, so it doesn’t bother me too much anymore. But, like I said, it just falls on deaf ears a little bit.”

Whether or not Genge captains England is all still up for debate, but what is extremely certain is the opposition he will be coming up against this summer. Each of the USA and Canada have finalised their squads for their tour of the UK and Ireland and the two teams have gone for mixed approaches.

??“This environment creates an opportunity for them to grow and be the best they can be..."

With plenty of new faces in Teddington, learn what Matt Proudfoot had to say about growth, leadership and learning lessons from a difficult spring below??https://t.co/jhsXmPklCY pic.twitter.com/AhkubcpnBD

The USA have gone for a blend of names old and new, with several players returning to Gary Gold’s setup after the World Cup, whilst also introducing a host of new names that will be a part of the team’s journey to the Rugby World Cup in two years’ time.

In contrast, Canada’s Kingsley Jones has chosen some experience but, on the whole, decided to blood an array of new talent that hasn’t played international rugby yet. It will be a trial by fire for some, but will no doubt be beneficial in the long run with opportunities to play tier one nations often at a premium.

At this point, England are expected to win both of the games, especially after an extremely poor Six Nations campaign. Not likely to offer an inch, Genge believes that his pack will be hoping to impress themselves, whilst also introducing new aspects to their play and seeing which of the new faces will strive in international rugby.

“They are developing nations, they are obviously getting better and better the more they play because in previous years they haven’t had too many fixtures against tier one nations, so I think they will have definitely benefited from the World Cup, the USA in particular,” Genge said.

“They are no mugs, so we have to prep the same way as we would for any other test match. I think you have got to go into every test match trying to be dominant, you are doing something wrong if you are not and it is probably something we pride ourselves on as an English pack.

“In terms of new patterns and stuff, you probably try something new, just because it is a completely different group and completely different players. I don’t think you have to try and reinvent the wheel; I think that is probably where you go wrong sometimes when you get new groups together.

“You try no look over the head kicks and stuff like that, but I don’t think you have to reinvent the wheel by any means. I think it is just about doing the basics well and then letting these young lads’ intuition kick in and let them play.”