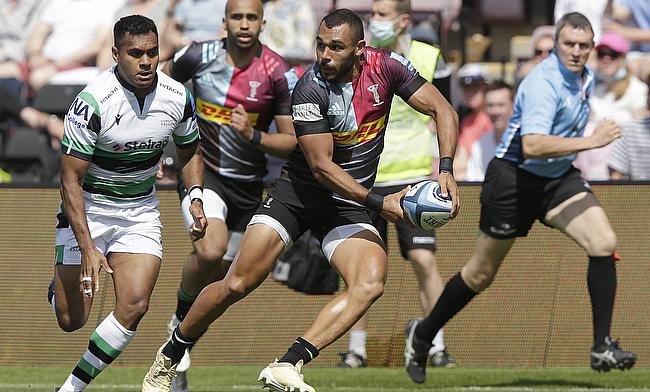 Joe Marchant made his Harlequins debut in 2014 and has made 111 appearances for the club
©Getty images for Harlequins. By Steve Bardens

Mike Rhodes to make Saracens exit at end of season
“It makes you feel very proud” - Sam James: From Sale ball boy to Premiership play-offs
Bristol's Pat Lam named the Global Reach Director of Rugby of the season
Kevin Sinfield to join Leicester Tigers as defence coach ahead of 2021/22 season

Back in the old days when there were just the four channels you used to regularly hear TV quiz contestants who had failed to win the big prize at the end of the show saying things like ‘I’ve had a lovely day and it was just great to be here’.

Those are not the kind of phrases you will be hearing from Harlequins’ players around their Gallagher Premiership semi-final away to the Bristol Bears this Saturday, that is for sure.

The men from the Twickenham Stoop finished fourth in the regular season standings, some 14 points behind the Bears who topped the table, and, as a result, not many outsiders are giving them a chance of going to Ashton Gate and causing an upset in the knock-out game.

However, the belief in the squad is as high as ever and centre Joe Marchant, who has been in cracking form of late, believes that his side has it in themselves to put in a performance that can get them to the final at Twickenham on June 26.

“We don’t want to rock up and just be happy to be in the play-offs, we are going to Bristol to win,” the 24-year-old told TRU.

"People will think because we finished fourth in the regular season table that we are the underdogs going into this weekend, but we have shown this season what we can do against the three other teams left in the competition.

“In February we beat Sale at home [24-12] and then in March we went to Exeter and Bristol and lost both away games by small margins [21-20 and 35-33] and could have won them both on another day, they certainly knew that they had been in tough matches and we really took it to them.

“We turned things around this season and in the last few weeks we have been playing a lot of good, attacking rugby and we have been scoring lots of tries.

“There have also been some good defensive performances, perhaps not as many as we would have liked, but that part of our game has been developing and I think we are striking the balance more now between knowing when it is on to have a go and perhaps when we have to just keep things that bit tighter.

“And the buzz around the squad really is as good as I have ever known it. Every day the boys are turning up for training with smiles on their faces and everyone is always pushing each other on to get better and that has translated into games.

“I am at my best when I am playing with a smile and enjoying my rugby and I am certainly doing that at the moment and I just can’t wait to play in this match. We respect Bristol, but this is about what we can do and what problems we can cause them.

“Fans being back in the grounds has been amazing, in the home games that we had recently against Bath and Newcastle Falcons they really lifted us.

“Obviously, the majority of supporters who will be at Ashton Gate on Saturday will be cheering on Bristol, but even just having that atmosphere in the ground makes a difference and gets you even more excited to play - not that you need any help getting up for a semi-final.”

Care and Smith: “They are both great people who are in amazing form”

If Harlequins are to get a victory on Saturday then their pack will have to be on the money.

If the forwards are on their game then that will give half backs Danny Care and Marcus Smith front foot ball to work with and release Marchant and the other exciting outside backs.

And Marchant loves having players like Care and Smith playing inside him in these types of matches.

“They might be at different stages of their careers [scrum-half Care is 34 and stand-off Smith is 22], but what matters most is that they are both great people who are in amazing form,” Marchant, the England cap who had a stint at the Auckland Blues in 2020, said of the nine and 10 combo.

“Danny has been working so hard and he is definitely one of the guys in our group who plays with the biggest of smiles on his face, he is always keeping the energy alive at training and in matches and he is such a good guy at getting a backline moving.

“Marcus has been in and around the pro game for quite a long time now for one so young and he has been playing some really mature, heads-up rugby recently and knows how to mix up his game well.

“It is up to myself and the rest of the backs to feed off them and use the ball they get us wisely.”

Mike Brown:  “He has been amazing for me, simple as that”

One player who of course will not be on the pitch for Harlequins against Bristol is long serving full-back Mike Brown.

He is currently serving a suspension meaning that he will not represent the club again before he moves to the Newcastle Falcons ahead of 2021/22.

The 35-year-old was given an emotional send off at the Twickenham Stoop last weekend after the victory over the Falcons and Marchant said:  “He has been amazing for me, simple as that.

“When I was at Peter Symonds College coming through the ranks I knew that Mike Brown had also gone there a decade before me and that meant when I arrived at Harlequins as a youngster he looked out for me from day one.

“Mike has always been there for me to talk to about my game or other things that are going on in my life and he has been a great sounding board for me, a really good friend and team mate.

“Obviously things have not ended for him at Harlequins as we would have liked, but he is still a massive part of our squad until our campaign is over and we all want to win this game coming up at the weekend and the final for Mike."