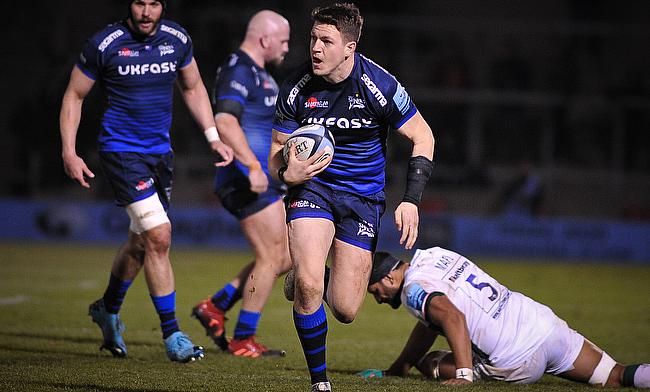 Josh Beaumont Column: We want to create a new legacy at Sale
Looseheadz x TRU Podcast - Sam James and Denny Solomona
Why Wilmslow High's latest stars are aiming to take the well trodden path into rugby
Sam James: 'England call-up was a big surprise and a massive honour, but I still have to improve'

When you walk towards the sports hall at Wilmslow High School, a wall is dedicated to some of the sporting talents who are now living the dream.

Former pupils such as Millie Turner [Manchester United] and Oskar Hirskyji-Douglas [England Sevens] are proudly showcased by the North West institution and their influence is still a source of inspiration for many budding athletes at the school.

But there is always a name of an ex-student which repeatedly crops up.

That student is Sam James, who this weekend is set to play in Sale Sharks’ first Premiership semi-final for 15 years against Exeter Chiefs. Of course, brother Luke is also another prodigious talent to graduate from Wilmslow and both siblings are still held in high regard by their secondary school.

“Any time you watch Sale when you see Sam or Luke play, there is a huge sense of pride that they have come through the ranks at Wilmslow High School and we played a small part in their development,” says Matt Bebbington who was one of Sam's former coaches at WHS.

James’ journey to this stage of his career is one which certainly falls under the bracket of ‘boyhood dreams.’ Back in 2006 - when Sale last lifted the league title - he was a ball boy for their semi-final victory over Wasps at Edgeley Park before he watched the final at Manchester Rugby Club as his heroes brought the trophy home.

A decade and a half later, James is hoping to follow in the footsteps of his idols having become one of the leading stars for this current Sharks outfit. Eight years ago, the versatile back made his Premiership debut against Northampton Saints and this season, he reached 150 appearances for the club he grew up supporting.

“It is surreal that he has gone from being a ball boy to where he is now!” James’s Dad, Neil, tells TRU. "We had season tickets and we used to go with friends to Edgeley Park. One great memory when Sam was ball boy was when Richard Wigglesworth was scrum-half for Sale. The ball went off the pitch, Sam passed it back on and Wiggy said something like ‘nice pass!’ It is a bit surreal seeing that he is now one of the players and doing his stuff on the pitch for Sale.”

After his father had first taken him down to Manchester as a four-year-old because he was “tearing up the back garden,” James was first spotted by Sale aged 13. His selection at county level for Cheshire also put him on the Sharks’ radar and remembering his roots is never too far away.

“I think where Sale are now is not only massive for the club, but for the whole community,” James says. "There is a good buzz and it is more excitement than pressure. People have been waiting a long time to be back in the semis and there are those lifelong supporters who we want to do proud on Saturday.”

Being self-indulgent is not something you can associate with James and that is evident when speaking to anyone who knows him or anybody who has helped the 26-year-old on his journey.

“When he first got into the first team, I think he was a bit awe-struck," Neil says. "Like any young person who makes that step, I think he was like ‘wow, this is great, I have done it,’ but I think when it settles in, they realise the hard work needs to begin.

“I think as a parent, your main aim is to turn out a level headed human being as they grow older and I think Sam has achieved that. Everyone you speak to does say to me and Julie [Neil’s wife] what a lovely lad he is. That makes you feel very proud."

“He’s so grounded and a very humble bloke,” James’ best friend and former teammate Tom Watts, adds. “This is partly down to Sam’s parents who have done a cracking job in bringing up a genuine and humble man who turns out to be alright at rugby. I love watching him on TV when I can and seeing that mullet flow in the wind!”

"We got on... Most of the time. Ping pong in the garage was like WWE!"@Sarraelgan caught up with sibling stars Sam and Luke James (and their lovely Mum) for a look at their journey to @SaleSharksRugby ??

Rugby has always been a huge part of James’ life. With his father being an exceptional player in his own right, a love for the sport seemed inevitable, but Sam’s ‘obsession’ around the game was clear during his school days.

When he was in Year 9, and with the help of coach Jonathan Leggett, his talents on the pitch were really starting to come to the fore and the group of people James was mixing with seemed to be addicted to rugby.

“When Johnny took over, it was clear Sam was an excellent player then, but around that team, they were all really good mates,” Bebbington adds.

“They were all really committed so they all never really missed training. I think they were the last set of lads that every break and lunch always had a rugby ball so on top of training for school, which no-one missed, on top of the stuff with Manchester and Wilmslow rugby clubs, at break and lunch, they would just be throwing a rugby ball around which you just don’t see anymore.

“The biggest point from me is what people probably don’t realise is Sam, at any given moment at school, had a rugby ball glued to his hands.”

“Certainly at school, his school teachers said he was always out at break time and lunchtime throwing a ball around!” Neil confirms. "At home, it was fitting everything in because he had so many other training sessions in the week so it was fitting in club rugby, school training sessions and then any county rugby because he was still involved in that and then the Sale stuff as well.

“He actually did play most of the matches and we wanted Sam to be involved in training as much as possible because we didn’t want him to become a prima donna who just turns up and plays the game.”

Bebbington is also quick to recall a school trip to northern Italy. Away from the pitch, James’ 'really bad travel sickness' is a memory that sticks out for his former coach, but it was the player’s exploits on the field that paved the way for him to transition into the 1st XV.

In 2010-11, he played an integral part in one of the most successful side’s WHS has ever had. That season, they won 21 of their 22 matches, lifted the Cheshire Cup and were only denied a place in the Daily Mail Cup final by a certain Elliot Daly who was the star of the show for Whitgift School.

“Sam got a late call up to make his debut for us in Year 11 against Manchester Grammar School which I think was in the Daily Mail Cup,” Bebbington continues. “It all happened quite quickly and he played 12 or 13 but I just remember even then, even though he was quite quiet and a little nervous, it was obvious he was an excellent player. He was brilliant in his own right, but he made the people around him look really good as well.

“Sam was then a massive part of that ‘golden era’ for us in 2010-11. We had a great season and that group of players were all round the best school side I have coached alongside team manager Roger Hancock who glued it all together.

“Those two years he was in Sixth Form and playing for us, that was the time where we were playing the top private schools in the north on a Saturday and then also through the Daily Mail Cup. Sam, without a word of a lie, was dominant in his position."

“The pure skill, passing off both hands, kicking off both feet, you name it, Sam could do it,” Watts adds. “Growing up, I think everyone knew he was going to make it.

“I can recall a couple of times when Sam got his hands on the ball in the centres and half of our team - ‘the fat ones’ - just stopped as we knew he was either going to score or create something so we knew exactly when to rest without getting shouted at by the coach.”

Once James had completed his studies at Wilmslow High, his career at Sale was now top of the agenda. He was on the books with Bebbington at Stockport for a short period, but the moment his father knew he could turn his dream into a reality was when he spoke to former Sharks’ Academy manager Dave Wilks.

“I think we went with the flow a lot of the time,” Neil adds. “We always knew he was a good player, but there are a lot of good players out there who fall by the wayside.

“I think the thing that got me was when he went up to Sale. Dave was really, really keen that Sam should progress and really show his talents. His first games were played in the Jets for Sale and he was saying to Sam to be confident out there because ‘he had it.’

"I think when he started saying that, we realised this could be a possible career for him and a possible step into the first team because Dave had such confidence that he was one of the stars coming through the academy.”

Since then, Wilks has been proved right 100 times over. James has hardly missed a fixture for Sale in the last five years and since Director of Rugby Alex Sanderson joined the club back in January, the status quo has not been interrupted.

After letting a home semi-final slip through their fingers following a quite remarkable fightback from Exeter last Saturday, James will be heading back down to Devon this weekend to face the current champions as Sale look to reach the Premiership final.

His family will be cheering him on from the stands as a "galvanised" Sharks side continue to work towards a “common goal" of lifting silverware. During our chat at the start of the week, James quite rightly points out that booking their place at Twickenham will be special for everyone at Sale, but his hometown of Wilmslow - and the surrounding areas - will continue to feel immense pride for one of their own.