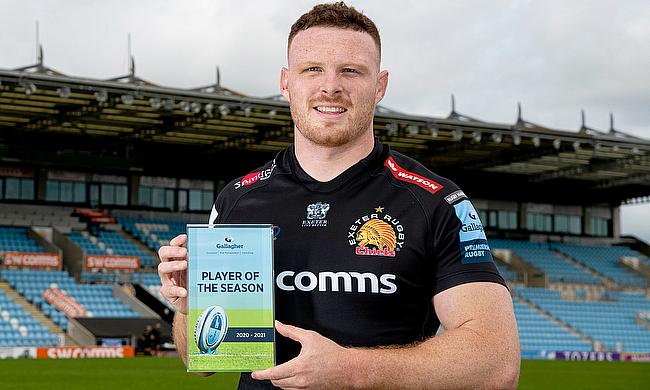 Sam Simmonds has been crowned the Gallagher Player of the Season for 2020-21.

The award caps off a remarkable campaign for the Exeter Chiefs’ star, in which he broke the record for the most tries in a single Premiership Rugby season, with 20.

He has been instrumental in another fine year for the Chiefs, who finished second in the table, booking a semi-final place and keeping alive their hopes of retaining the title.

The Torquay-born back-rower had already been recognised for an outstanding season with a call-up by the British & Irish Lions for their summer tour to South Africa, and he has now capped that feat with the prestigious Gallagher Player of the Season gong.

Simmonds crossed for a hat-trick against London Irish in May, to break Christian Wade’s and Dominic Chapman’s Premiership Rugby try-scoring record for a single season.

Gallagher ambassador and BT Sport pundit Ugo Monye believes Simmonds' ability to stand out in a league brimming with quality shows how high his standards have risen.

Monye said: “Sam has been phenomenal this year. I think he started the season fuelled by bitter disappointment (through lack of England selection), but he has focused on it in the right way, to become a record-breaker, help his team into the Gallagher Premiership Rugby semi-finals and is now a British and Irish Lion.

“His season has been one of the best individual seasons in Premiership history. I think when you are breaking any sort of record, it has to be put down as a memorable year.

“He has smashed the try record - not only beaten it but smashed it. That is the kind of form he has been in.

“It is unbelievable when you consider just how many talented players we have in Gallagher Premiership Rugby, and yet he has been the shining star, among a galaxy of superstars."

Simmonds edged out Harlequins fly-half Marcus Smith to win the award, with the latter selected as the runner-up.

Smith continued his remarkable rise with a brilliant year at The Stoop, finishing the regular season as the highest points-scoring individual in the entire league.

The 22-year-old scored 270 points in total, 82 more than Sale Sharks’ AJ MacGinty who was next in the rankings.

An elusive and dangerous runner, Smith has once again been one of the most exciting players to watch in the Gallagher Premiership, as Quins prepare for a return to the semi-finals.

Another Chief - Dave Ewers - was third. Ewers has also played a big part in his team’s success this season, chipping in with six crucial tries of his own.