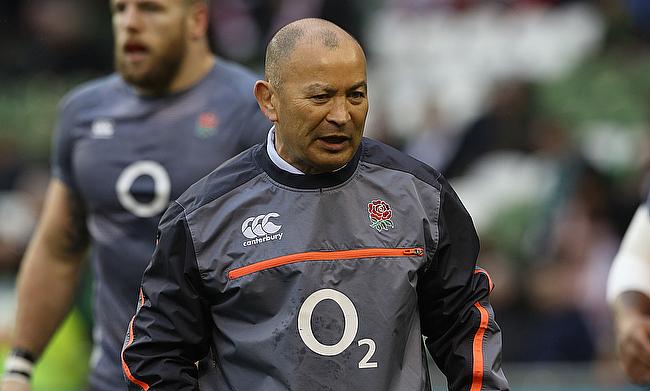 England coach Eddie Jones is intending to have a training camp for the red rose team in Japan next year to help them combat the challenges of the 2019 World Cup.

England are pooled along with France and Argentina in the 2019 edition during the draw that was announced in Kyoto on Wednesday and Jones wants to ensure they cover all the bases before the gruelling challenge.

Tokyo, which was identified by the British Olympic Association as a training camp to help them prepare for 2020 Olympics appears to be the front-line choice for England's preparations.

Having worked with various clubs in Japan and also having the experience of coaching the national team in the country will make Jones wary of the challenges England might face when they head to the Land of the Rising Sun for the mega event.

"From a cultural point of view everything's going to be different. You can't expect it to be the same as a western tournament," Jones said.

"The way we behave and the way we act around the place will be important because Japanese can be very helpful or very unhelpful.

"I want the staff to get an idea of how to interact. Then we'd like to bring the team over here in 2018 , but we're just trying to find a way to do it. Maybe the Six Nations fallow week - now that'd be a good camp!

"One of the key things is that I know how difficult this place can be. If you get things right it can be a real joy and my challenge is to get our staff to believe that.

"Our staff will get incredibly frustrated at times because people say yes to you when they mean no. That's the reality.

"No one says no to you, it's always yes. But when they say yes three times but nothing happens then that means it's actually a no.

"That frustration can build up and what we need to make sure is that we create an environment where the players are comfortable with their situation."

The 57-year-old also highlighted on the other challenges England might face apart from the cultural differences.

"There will be two different types of weather. It gets so humid and wet here in late September. It's almost impossible to hang on to the ball," Jones said.

"Then in October the weather's beautiful - warm, dry, 22C - so the game will change.

"I can guarantee you we'll be prepared for the humidity. There's sports science ways of preparing and psychological ways.

"You need to make sure your players have endured it before so they know what to expect. It's different playing when it's hot and wet to when it's cold and wet. Your body feels different.

"We'll make sure we give the players the necessary experience to build up a residual to that. They'll know what to expect and will be ready to go. I see it as an advantage to us."

Jones was the head coach of the Japan team before he took in charge of England and during his stint he led the Asian team to a historic victory over Springboks in the 2015 World Cup and the former Wallabies coach expects it to work in his favour during the 2019 World Cup.

"We'll get more support, definitely, from the Japanese because of that. That will help during the games without a doubt," Jones said.

"There are two sides to it. They love the Kiwis here, so the Kiwis will get everything - five star. So we have to aim to get four and a half stars."