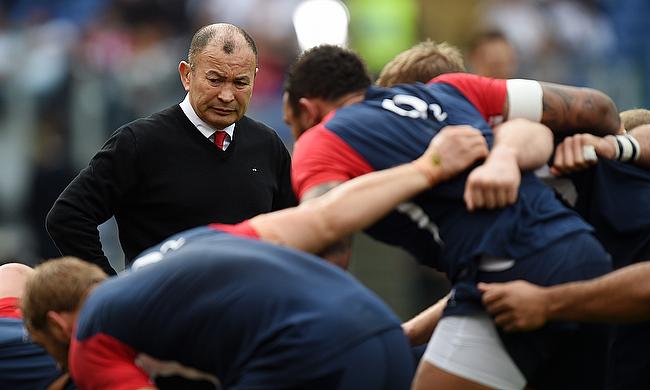 Eddie Jones will release his England side for Argentina later this morning.
©PA

With the anticipation of the British and Irish Lions squad announcement well and truly behind us and the controversial choices Warren Gatland made still fuelling debate among the Home Nations, focus now turns to the imminent England squad.

Sixteen of Eddie Jones’ back-to-back Six Nations winners are headed to New Zealand, while some of the more contentious exclusions from Gatland’s squad will instead be joining England on a tour of Argentina come June. There will, however, be a fair few places for those who have earned their maiden international calls throughout the course of this season.

Who comes in to replace the ever-present Owen Farrell? Who makes up the numbers in the front three? Here is our 30-man squad for this summer’s clash with the Barbarians at Twickenham, before heading out for a two-game series against Los Pumas.

Dylan Hartley became the third successive England captain to be omitted from the Lions on Wednesday, with his deputy Jamie George being favoured instead and making him a sure-fire starter for his country in June. Tommy Taylor swapped Sale Sharks for Wasps last year on the grounds of international ambition, and looks to have succeeded following an outstanding campaign in Coventry.

It’s easy to forget that Ellis Genge is just 22 years old. He has a solitary international cap to his name but could well find himself as England’s starting loosehead in Joe Marler’s absence. His dominance at the scrum has played a key part in the revival of Leicester Tigers’ season, and he recently dotted down twice against Newcastle Falcons. Matt Mullan looks set to play second fiddle, having been in and around the England squad for much of Jones’ tenure, but could face competition from Bath’s Nathan Catt and Northampton Saints’ Alex Waller for selection.

The biggest area of opportunity comes at tighthead prop, where not one but two of England’s first choice squad members will be absent. It seems likely that the battle for a starting berth between Kieran Brookes and Paul Hill will be transferred from club to country, as the Saints duo look set to make the trip.

Jones will be pleased, while rather befuddled, that he has the luxury of selecting Joe Launchbury, whose barnstorming performances at the Six Nations were somehow not enough to impress the Lions selectors. But with Maro Itoje, George Kruis and Courtney Lawes being chosen, it leaves the England head coach with plenty of room for new additions.

Sale Sharks’ Josh Beaumont is as likely a debutant as any for this summer’s tour, having been included in a number of recent training camps. He currently plies his trade as a number eight, but it’s no secret that Jones fancies the six-foot-seven forward as a lock, and with Sale making several additions across their back row for next season it’s probable that is where his future lies.

Bath’s Dave Attwood has also been on the fringes of the squad, and could have already earned the step up under Jones had it not been for injury. His 24 previous caps could well be added to alongside teammate Charlie Ewels, who made his three international appearances late last year.

In perhaps England’s least desolate area post-Lions selection, Jones will be able to call upon plenty of familiar faces to pad out his back row. Even with a complete squad free from injuries, Harlequins’ Chris Robshaw and Wasps’ James Haskell regularly packed down at six and seven respectively.

Teimana Harrison has also had his opportunities with England, and will be hoping to challenge for a starting spot in South America. Although possibly more adept as a number eight, he’s already shown plenty of promise as a flanker for his adopted country.

Flanker Sam Underhill has, despite playing in Swansea with Pro12 outfit Ospreys, been under the watchful eye of Jones for some months now. His summer switch to Bath makes him eligible for selection, and he could be one of two youngsters to feature in the loose forwards alongside his new teammate Zach Mercer.

Despite being just 18 years of age, Mercer’s impressive performances for club and country (at under-20s level) have put him third-in-line to the number eight jersey, behind Nathan Hughes and New Zealand-bound Billy Vunipola. In the absence of Ben Earl, he captained his side on a Grand Slam winning crusade earlier this year and could soon find himself in the senior squad.

There would appear to only be one slot for a new face among the half-backs, with Dan Robson hoping to fill the void left by Ben Youngs. The scrum-half has impressed throughout the course of the season despite sharing his responsibilities with Joe Simpson, registering nine try assists in the Premiership, a competition best.

He looks set to be partnered by the experienced Danny Care, who will be adding to his already impressive tally of 71 caps, with George Ford and youngster Alex Lozowski coming in at outside half. The battle between those two could be closer than expected, however. The Saracens fly-half is the third top points scorer in England, and Ford could be pressed for his starting place without Farrell to partner him at outside centre.

Along with tighthead prop, the centres pose another prime opportunity for those trying to make their mark on the international scene. The seemingly inevitable choice made by Jones will be Henry Slade, in that he’s the archetypal fly-half-come-centre that can slot in for Farrell. Joe Marchant has been in and around the squad over the past year, but is yet to earn his first cap.

Jones showed immediate interest in Ollie Devoto when he first assumed the position of England head coach, having been called up to his first Six Nations squad in 2016. He went unused however, but having become a regular starter following his move to Exeter Chiefs, he’s now likely to step out for his country before next season.

Will Addison will have almost certainly been included had he not sustained a foot injury that would keep him out of contention, but his Sale colleague Sam James has logged a similarly impressive season - whether it be at 10, 12 or 13. His versatility, along with that of Slade, should have done enough to peak the interest of the England coaches, and he’d be more than deserving of his spot.

With Alex Goode unavailable through injury after tearing ligaments in his ankle, the time may have come for Mike Haley to earn his maiden cap. The Preston-born fullback was first involved with the senior squad in the autumn, having played for the Saxons in South Africa last summer, so he’s certainly on Jones’ radar. Mike Brown, having been left at home by the Lions, is as certain a selection as any to give Haley a challenge.

Then, it all comes down to the wingers. Jonny May and Marland Yarde are likely to be the two to retain their spots in the squad, while Semesa Rokoduguni would be worthy of another chance to impress for his country despite Jones’ apprehensions. The boldest call of all, however, would be selecting rugby league convert Denny Solomona.

The New Zealand-born Shark, who formerly represented Samoa in league, is as natural a finisher as can be. His remarkable start to life in the Premiership saw him score nine tries in his first eight outings, and having recently declared himself as English qualified it’d be surprising if he was left out. He’s played a lot of rugby of late, after joining Sale in December on the back on an entire Super League season, but his try-scoring form alone should earn him a seat on the plane.