Do the Saints have enough strength in depth? 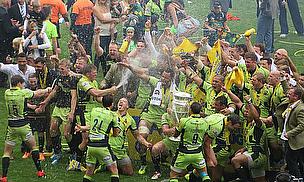 Can Northampton Saints follow up their remarkable 2013/14 season with more success?
©Press Association

Last Season: Won the Aviva Premiership, Lost to Exeter in final of the LV= Cup, Won the Amlin Challenge Cup

Last season, Northampton enjoyed the most successful season in their history. Not only did they win the Aviva Premiership, the trophy they have coveted for so long, but they also brought home the Amlin Challenge Cup and made it to the final of the LV= Cup. It will be extremely difficult to replicate that success, but if you listen to the noises coming out of Northampton, their eye seems to be keenly trained on the inaugural European Rugby Champions Cup.

The Saints haven’t opened the cheque book to bolster their title-winning squad, but with a great crop of academy graduates currently verging on breaking into the first-team squad, they could have the depth to compete strongly in both the Aviva Premiership and Champions Cup. That said, Northampton’s chances of success in Europe this season will rest heavily on their ability to avoid injuries, with their first XV a match for anyone in the competition.

Although Corbisiero is not technically a new signing, injuries meant that he played a limited role in 2013/14 and if he can stay healthy this season, he can be a real force for the already formidable Northampton pack.

His absence last season was mitigated by the form of Alex Waller, but there’s no doubt that a healthy Corbisiero is one of the most dominant scrummaging props in world rugby and can be a difference maker, whether that’s against fierce rivals Leicester in the Aviva, or taking on a star-studded French side in the Champions Cup.

Of course, given recent injury history, relying on Corbisiero to be fit for an entire season could be dangerous for Mallinder and Northampton. The key for Saints will be to use Corbisiero tactically, rather than relying on him to be a workhorse.

With the development of Waller and emergence of Danny Hobbs-Awoyemi last season, there is no reason for Corbisiero to be playing week in, week out in 2014/15.

When you play in a pack with Courtney Lawes, Tom Wood, Dylan Hartley and Samu Manoa, chances are you’re often going to be overlooked when the media dishes out its post-match praise. Clark is one of those players that does everything well, but doesn’t always receive the recognition he deserves because he doesn’t excel in one particular area.

In fact, it’s his perceived role as a jack of all trades and master of none that is arguably the only thing which has prevented him from breaking into the England national team set-up already.

He might not make the highlight reel as much as Lawes, Wood or Manoa, but the graft and versatility he displays are extremely praiseworthy. His physicality and unrelenting style of play has been the difference for Northampton in the past and could be again this season. Do not rule out Clark being a bolter for the 2015 Rugby World Cup, either.

Best Case Scenario: Northampton begin the season as if the last one never ended. They make an undefeated start to the season (Gloucester (H), Wasps (A), Newcastle Falcons (A), Bath (H), London Irish (A), Sale Sharks (H)) and race into top spot.

The confidence boost puts them in good shape to take on their Champions Cup pool (Racing Metro, Ospreys and Benetton Treviso), which they have every chance of qualifying from as the competition’s number one overall seeds.

Their young talent steps up during the Autumn Internationals and Six Nations and they go into the business end of the season with the Premiership and Champions Cup trophies within grasp.

Worst Case Scenario: The fatigue of a long and gruelling 2013/14 season comes back to haunt Northampton, as do the increased expectations.

Teams begin to work out how to nullify Saints’ powerful ball-carriers and their effective driving maul, and as a result, their away wins begin to dry up. Saints slip out of the playoffs, replaced by a Sam Burgess-inspired Bath side, and have to make do with a 5th placed finish in the Premiership and an ignominious exit at the quarter-final stage of the Champions Cup.

Prediction: Northampton have the talent to be a force in both the Premiership and Champions Cup this season, but they will also need a decent slice of luck.

Given their RCC pool, it would be understandable for Saints to focus on that competition, as picking up six wins in the group stage is not out of the question.

It would not surprise me if Northampton claim the inaugural Champions Cup, but may have to be placated with a 3rd place finish in the Premiership. Saints have good depth, but they feel slightly thinner at certain positions than the likes of Leicester and Saracens.