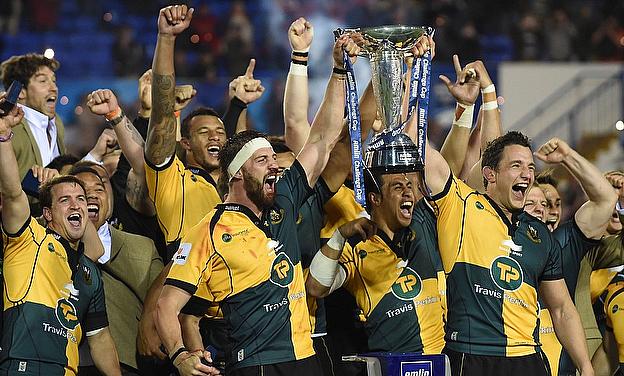 England coach Stuart Lancaster looked on as Ford, who will miss the three-Test tour of New Zealand next month due to impending shoulder surgery, lost his radar.

He did kick three penalties but Myler, who looks set to be among England's number 10s in All Blacks country, showed him how it should be done with a masterclass.

It ended Northampton's run of four successive defeats in major finals - one Heineken, one Premiership and two LV= Cups - and they will not be short on confidence heading into next week's domestic title showpiece against Saracens at Twickenham.

They clawed back to 13-12 adrift approaching the hour-mark, then two more Myler penalties to one by Ford edged Northampton ahead before Dowson and Foden pounced in quick succession.

It denied Bath a first piece of silverware since they beat 2008 Challenge Cup final opponents Worcester, but it was Saints' second Challenge Cup triumph in six seasons.

Northampton were without suspended prop Silesi Ma'afu, who was sent off in last week's Premiership play-off victory over Leicester, so Tom Mercey deputised, and there was also a start for British and Irish Lions Test loosehead Alex Corbisiero.

Ford, who had been the pre-match centre of attention, underlined his worth to Bath by booting a second-minute penalty from just inside his own half, but that strike was quickly cancelled out when Myler landed a short-range kick.

Ford and Myler exchanged further penalties during a tight, tense opening quarter, but Bath then struck with the game's opening try 13 minutes before half-time.

Northampton were knocked back in attack inside Bath's own half when Jonathan Joseph completed a crunching tackle on Saints wing Ken Pisi, and Watson gathered possession before he sprinted 60 metres unopposed to touch down.

Ford's conversion took Bath 13-6 ahead, and they should also have had a temporary one-man advantage when Northampton skipper Tom Wood pushed Louw over off the ball as Bath attacked.

Referee Jerome Garces awarded Bath a penalty that Ford missed, but he opted not to award a yellow card that England flanker Wood's indiscretion warranted.

Northampton did not learn their lesson, though, and three minutes after the break Corbisiero was sin-binned for tackling Bath captain Stuart Hooper off the ball, but Ford again drifted his kick wide.

Myler then completed his penalty hat-trick and it was the cue for Bath boss Mike Ford to make his first change as scrum-half Peter Stringer replaced Micky Young before Ford missed with another shot at goal.

Ford's inaccuracy off the kicking tee came as an unexpected bonus for Northampton, and it meant they were still in a game that Bath should have been on the verge of closing out.

But Bath substitute prop Anthony Perenise was yellow-carded 10 minutes from time and Northampton made them pay instantly when Dowson was driven over from a lineout and Myler's conversion sealed the deal.

A Myler interception of Ford's pass then had Bath retreating rapidly in defence, and although supporting centre Luther Burrell slipped with the line at his mercy, Saints had enough players in support for assist Foden and Garces awarded the try on confirmation from television match official Eric Gauzins.

Bath were finished and it meant they ended a season that promised so much as losing Amlin finalists just two weeks after they finished fifth in the Premiership and missed out on the play-offs.