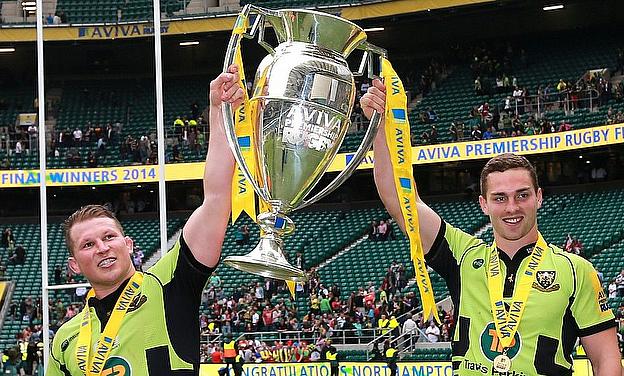 Northampton will begin the defence of their first ever Aviva Premiership crown at home to Gloucester on Friday, September 5.

Saints will kick-off the campaign under floodlights at Franklin's Gardens and are one of four matches over the opening weekend to be televised live on BT Sport.

In the other matches on Saturday, Sale are at home to Bath and Leicester launch their title challenge against Newcastle at Welford Road.

Northampton beat Saracens in a dramatic play-off final in May and Saints will take their rivals to Milton Keynes when the two sides meet on April 25.

Their first rematch in the league will be at Allianz Park on November 22.

Sarries will also make a return to Wembley on March 28 when another bumper crowd will be expected to watch them play Harlequins, who lost to Mark McCall's men in last season's semi-finals.

Harlequins will again host a Christmas match at Twickenham, this time against Northampton on December 27.

Saints director of rugby Jim Mallinder said: "It will be exciting to start the 2014/15 season under the lights on a Friday night and at home at Franklin's Gardens.

"The last time we played at home was the Aviva Premiership Rugby semi-final and if we can start next season in the same type of atmosphere as we finished 2013/14 then it will be tremendous.

"Gloucester have made a lot of changes behind the scenes this summer, and it will be an exciting test.

"We know that as champions we are there to be aimed at and that every team we play will raise their game against us."

The Premiership fixtures for rounds one to six are confirmed. From round seven onwards they are subject to television selections.