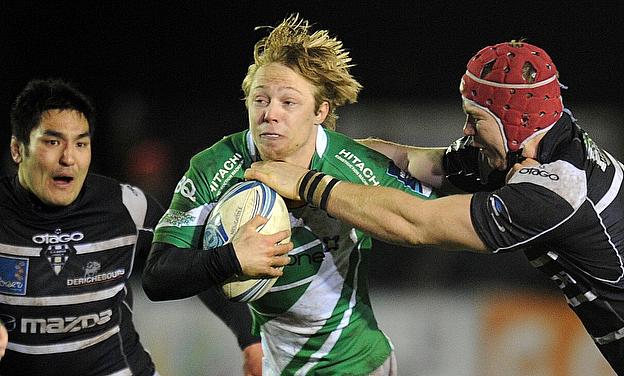 The former RGS Newcastle pupil had been billed as another outside-half in the mould of Jonny Wilkinson and Toby Flood when progressing through the Kingston Park ranks.

Hodgson was effectively mentored by Wilkinson at Newcastle for a number of years coming through the academy - but now Saints boss Mallinder has recruited the goal-kicking playmaker to feature predominantly at nine.

"Scrum-half is a specialist position where you need a lot of depth, especially when you have the likes of Kahn Fotuali'i and Lee Dickson away regularly with Samoa and England," he said.

"Joel is a talented young English player, and he will provide stiff competition for Alex Day, who himself won the Junior World Championships with England just 12 months ago.

"We certainly view Joel as a player who has a lot of potential and we're looking forward to seeing him develop at Franklin's Gardens."

Hodgson joined the Falcons' professional squad in the summer of 2010, making his first team debut as a replacement during the Falcons' Amlin Challenge Cup victory over Bourgoin the following season.

Falcons rugby director Dean Richards admitted Hodgson has a big opportunity ahead in the East Midlands.

"Joel is a talented local player and we're sad to see him go, but joining the Aviva Premiership champions offers a great opportunity for him to play a part in and learn from a team which is at the top of the league," he said.

"We wish Joel all the best with Northampton but as is always the case at Kingston Park, the door is never closed to local talent and we look forward to watching Joel's progress closely over the coming seasons."

Admitting it will be a challenge to leave his native North East, Hodgson said: "I'd like to thank everyone at Newcastle for everything they've done for me over the past few years. I grew up supporting the Falcons and to wear the first team shirt was a real privilege.

"Leaving Kingston Park and the friends and supporters I have at the Falcons will be a wrench for me and I'm under no illusions that it is going to be a steep development curve for me, but I believe that the move to Northampton is in the best interests of my long-term career."