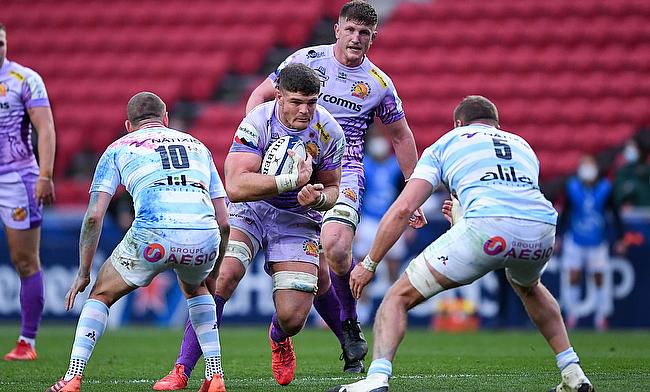 Situated in the stands at Sandy Park is Dave Ewers.

He is fulfilling his press duties ahead of the club’s Gallagher Premiership clash with Wasps on Saturday, but the towering forward would have been glad his time on the terraces only lasted 17 minutes on this occasion given what he experienced at the end of last season.

In the final match of the regular campaign, Exeter defeated Sale Sharks 20-19 and during the game, Ewers was yellow-carded for a high tackle on Simon Hammersley. That incident was subsequently cited and the Chiefs forward was handed a four-game ban.

“I was gutted,” says Ewers. The sanction meant one of Exeter’s longest-serving players had to watch their Premiership semi-final and final from the sidelines, but the club also confirmed the Chiefs back-rower would have been selected for England’s summer series if he hadn’t been suspended.

“Obviously, I have missed a fair few games through injury, but I would say being banned for games was something I am not used to,” adds Ewers. “It was a tough pill to swallow.

Disciplinary update: Dave Ewers has been given a four week suspension having been cited for a dangerous tackle. pic.twitter.com/Z18NZBfGX4

“It was awful timing. First of all, not being able to play here at Sandy Park for the semi-final and obviously up at Twickenham. The decision was made and I had to get on with it.”

Despite the bitter disappointment of being absent from Exeter’s title push and missing out on his long-awaited England call-up, Ewers admitted his enforced time away from the field allowed him to have an operation on his thumb.

Exeter boss Rob Baxter also revealed the powerful forward had another “small op”, but Ewers was able to make his return for the Chiefs in their win over Sale at the beginning of the month.

“It allowed me to get on with operations to try and get back for this season so fortunately, I am all back and going now,” Ewers continues.

“We had a few injuries in that week building into Sale so I thought if I was lucky, I was going to be involved off the bench, but I was flung in to start!

“That was probably the best thing for me, but in the build-up to that game, I was a bit worried about the old lungs so fortunately, I wasn’t too bad!”

Ewers was also in the starting XV for last weekend’s convincing 42-5 victory over Worcester Warriors, where he lined up alongside the returning Sam Simmonds.

The Premiership’s Top Try Scorer in 2020/21 hit the ground running as he crossed the whitewash on two occasions to cap off a special week after he recently became a dad.

Even though he produced a record-breaking season last term, Simmonds was not deemed good enough to be named in England’s summer plans and instead was called up for the British and Irish Lions.

However, Eddie Jones did include the 26-year-old in his training squad last month and with the autumn internationals just around the corner, Simmonds is one of the leading candidates to make the No.8 jersey his own.

“I love playing with him,” Ewers said of Simmonds. “It does bring out the best in me too. Simmo came through Ivybridge [Community College] a couple of years after me, but you could always tell he was going to be a special player. As soon as he got his chance, he has never really looked back. He is a phenomenal player.

“You do wonder where some of his speed comes from sometimes because he takes off and leaves us way behind!”

Simmonds will likely be jostling for an international starting berth with Billy Vunipola and Alex Dombrandt, but for Ewers, he is unsure about his own England future. Though a measured talker when the subject is mentioned, there is a sense of a ‘missed opportunity’ in his voice.

“I don’t think it is for me to decide whether the door is closed or not,” Ewers says. “Obviously, it would be an honour to be involved again to whatever degree, but as soon as I start looking too far forward, that is when performances probably start to slip off and probably where I went wrong earlier on in my career.

“I was probably looking forward too much and not dealing with what was ahead of me. At the moment, I am concentrating on trying to perform here.”

Whilst there might be questions marks over the 30-year-old’s international involvement, one of Ewers’ teammates is at the other end of the spectrum.

This week, 19-year-old lock Christ Tshiunza was named in Wales’ squad for Tests against New Zealand, South Africa, Fiji and Australia after making just four appearances for the Chiefs.

The University of Exeter student came off the bench in last week’s win over Worcester and Ewers is delighted one of the club’s emerging talents has been recognised.

“I have heard just then [Wednesday afternoon],” Ewers says. “It is incredible news. Physically, he is just a mountain of a man at such a young age. He is huge! He towers above me in height and he is probably wider than me too! His body is huge! He has got tremendous potential.

“What I do like about Christ is he is always wanting to learn and when things don’t go quite his way, he asks the question about what he probably should have done. He is a bright guy and he is willing to learn which is always nice to see as young boys coming through.

“It is awesome to see Wales going with him. Being so young, he can just go from strength to strength. Obviously, being in that environment, it will just take his game to the next level because he will see the step up in intensity. He will just learn, which he is willing to do. It is exciting for him.”

The young forward is not part of Exeter’s 23-man squad which will come up against Wasps this weekend whilst the experienced Ewers slots into the back-row for his third successive start.

The Chiefs are midtable after four games but head to the Coventry Building Society Arena having secured back-to-back wins. After Wasps, they are at home to London Irish and away to Gloucester before concluding this block of Premiership fixtures at Sandy Park against Newcastle Falcons.

After a disappointing start to the campaign, Baxter’s men have shown signs of looking back to their best and Ewers feels Exeter will have to focus on one player in particular if they are to get the job done in the Midlands.

“It is always a tough game up there,” Ewers says. “Wasps love running with the ball. You can hardly take a breath normally playing against them so we have got to be really alert.

“Dan Robson at nine is normally the heartbeat of their team. He is always on the go so as forwards, we have got to be on the move and try to mark him because he will be looking for us when we are tired so we have got to stay on the move.

“It is always a tough battle up front too with them. It is tough in the forwards and their quick backs have got you running around too! It is always an exciting game against them.”