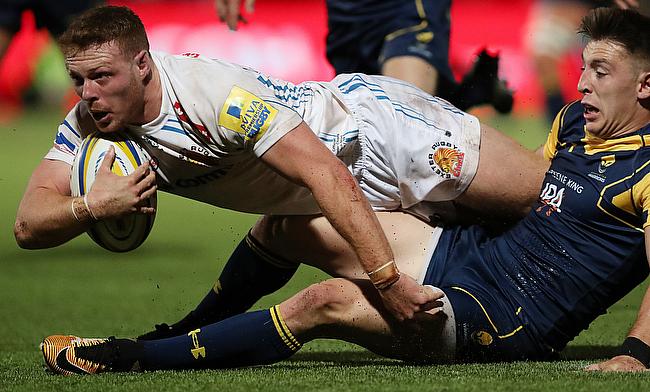 Sam Simmonds and Facundo Cordero scored doubles as Exeter Chiefs trounced Worcester Warriors 42-5 in the fourth round of the Gallagher Premiership at Sandy Park on Saturday.

This is second win for Exeter in four games as they moved to the fifth place in the table while Worcester are at ninth place after losing their third game. The match also saw Jonny Hill making his 100th appearance for Exeter as the club players were donning a blue kit as a tribute to NHS.

Both the teams were desperate for early breakthroughs which did not come until the 22nd minute when Dave Ewers powered his way over for the opening try and Henry Slade kicked the conversion to take them to a 7-0 lead.

Sam Simmonds, who broke the record for most Premiership tries soon got his first score of the season in the 33rd minute after good work from Alec Hepburn and Hill and Slade once again improved it as they doubled their lead 14-0.

With the break approaching, Exeter got their third try as Cordero at the back of a line out to dot down following an offload from Tom Hendrickson and Slade followed with the extras as they headed into the break with a 21-0 lead.

Cordero continued his impressive run early in the second half as he touched down to help Rob Baxter's men claim the bonus point and Slade improved it making it 28-0 and five minutes later it was Sam Simmonds' turn to complete a double as they scored 35 unanswered points.

Exeter continued their dominance as Joe Simmonds found his way over from another tap penalty and also kicked a conversion of his own taking their tally to 42 points before Justin Clegg scored a consolation try for the visitors in the final minute but that did not stop Baxter's men complete a 37-point victory.