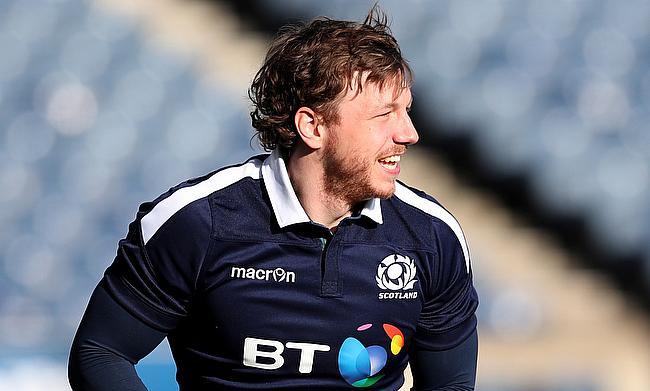 Scotland international Hamish Watson says it is ‘nice’ to see his name mentioned in relation to next summer’s British and Irish Lions tour, but he believes any player with selection ambitions must focus on their performances for their club and country.

Watson, 28, has been one of Scotland’s key figures over the last three years and the back-rower was in impressive form before the coronavirus pandemic halted rugby.

Various articles discussing the Lions squad ahead of next year’s trip to South Africa have included Watson’s name, but the Edinburgh star isn’t looking too far ahead.

Speaking on the Looseheadz x TRU Podcast, he said: “Now it [the Lions tour] is coming around again, you sort of forget about it and forget what happened three years ago, but now it is coming around again, it wouldn’t be true if I said it wasn’t in the back of most rugby players’ heads that they want to be on a tour at some point.

“It is never something I grew up wanting to do. I was never a young kid saying ‘I want to be a Lion’. I always wanted to grow up and play for Scotland.

“You have got to be playing bloody well for Scotland this year and to do that, you have got to play well for your club so there are a lot of things that have to happen first before we even get to that point of selection [for the Lions] and whether you are good enough to be picked.

“You have got to keep up your performances. It is not something I am thinking massively about. You see things and it is nice to have your name included in the ‘maybes’, but that position is hotly contested. There are a lot of good sevens and back-rowers so we will just have to wait and see.”

Watson was part of a Scotland side that was generating momentum in the Six Nations prior to Covid-19 after wins over Italy and France, but now his attention will turn back to domestic duties with the Pro14 season set to resume next month.

Edinburgh will play rivals Glasgow on August 22nd and 28th at Murrayfield and Richard Cockerill’s men currently sit on top of Conference B with the semi-finals in their sights.

In addition to this, Edinburgh are also preparing for a European Challenge Cup quarter-final against Bordeaux Bègles and Watson hopes the side can end the campaign with a flourish.

He added: “It is exciting. I just hope we don’t see a second spike and it all puts stuff on the backburners again because that is something obviously everyone in sport is worried about.

“We can just control what we can and get back to training to do what is necessary. When the coronavirus sort of hit, it was a bit gutting for everyone at Edinburgh because we were probably having the best season we have had in years. We are in the quarter-finals in Europe, top of our conference in the Pro14 and sort of flying so we are in a really good spot.

“I think we need to win one of these Glasgow fixtures to get a home semi-final and the benefits of winning those games are huge. Those derby games against Glasgow are always tough.”

Back three struggle as Lions lacked intensity against Springboks