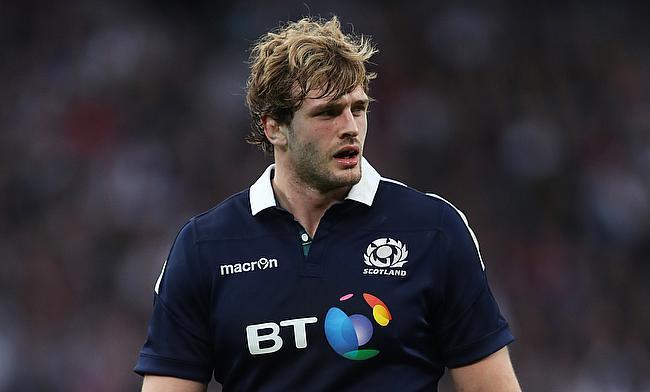 Richie Gray hopes that the move to Exeter Chiefs will see his younger brother Jonny take his game to the next level and propel himself into Warren Gatland’s thoughts for next year’s British & Irish Lions tour.

Gray senior, now 30, has arrived back at Glasgow Warriors this summer for a second stint after eight years plying his trade in England and France.

And just as he is settling back into his home town, Jonny has decided to take the next step in his own career by moving to Sandy Park.

Having moved to Sale Sharks from the Glasgow club back in 2012, before going on to spells at Castres and Toulouse, Richie knows what it is like to head south with big expectations on your shoulders.

However, Richie was only 22 at the time with 24 Scotland caps under his belt whereas Jonny is now 26, has played for his country 57 times and has been part of the Warriors’ leadership group for a few years now.

As such he has a lot more rugby knowledge tucked away as he leaves ‘home’ for the first time.

Richie went on the Lions tour to Australia in 2013 - and he hopes fellow second-row Jonny can hit the ground running at Exeter as they finish off 2019/20 and then start 2020/21 and capture the attention of Lions’ head coach Gatland in the process ahead of their South African sojourn in 12 months or so.

“If he’s performing well [with Exeter] then I don’t see any reason why Jonny wouldn’t be in the conversation for the Lions,” Richie told TRU.

ICYMI | It might have been 8? years since his last appearance for Glasgow Warriors, but Richie Gray is ready to hit the ground running on his return to his hometown club.

“In the next few months when rugby resumes he’ll be competing for a Gallagher Premiership final, competing for a European Champions Cup trophy and I’m sure it’ll be the same next year [2020/21] given the quality of side that he’s moved to.

“I moved away from Glasgow myself before so [when Jonny asked for advice about going south] I was able just to speak about the good things and the bad things [that life away from home can bring].

“I won’t go into detail because that’s a personal thing between me and him, but although he was gutted to leave Glasgow this is another challenge for him with the top side in England.

“He is loving it at Exeter, he’s been training for the last few weeks and is really enjoying himself. I am sure he’ll do really well.”

“The desire is always there to play for your country”

Meanwhile, Richie has given supporters north of the border a massive boost by declaring that he still has the “desire” to play for his country going forward.

He has been a ‘fans favourite’ over the years, however the last of his 65 Scotland caps came in March 2018 and since then he has had injury problems and turned down the opportunity to join the World Cup training squad last summer for personal reasons.

“I think the desire is always there to play for your country and that is the same for every player,” he said ahead of what is likely to be a busy international calendar in 2020/21.

“I have had discussions with [Scotland head coach] Gregor Townsend since the World Cup, he was just checking on how I was doing and because of injury I was unavailable for the Six Nations, but it is always an honour to represent your country.

“Gregor was very understanding about why I wasn’t at the World Cup and he left the door open [for selection again].

“I am available and those conversations will happen over the next few months.

“But, first and foremost I have to focus on Glasgow and making a good impression with the Warriors because you have to be playing well for your club to earn Scotland recognition.

“There is a lot of strength in depth in the Scotland second-row and real competition for places, so we will see what happens.”

Richie has not played since December after he suffered a head knock whilst training with Toulouse, but has now begun voluntary fitness training with the Warriors at BT Murrayfield and hopes to put himself into the mix for selection when they take on Edinburgh on August 22 on a weekend when professional rugby returns in the Guinness PRO14.