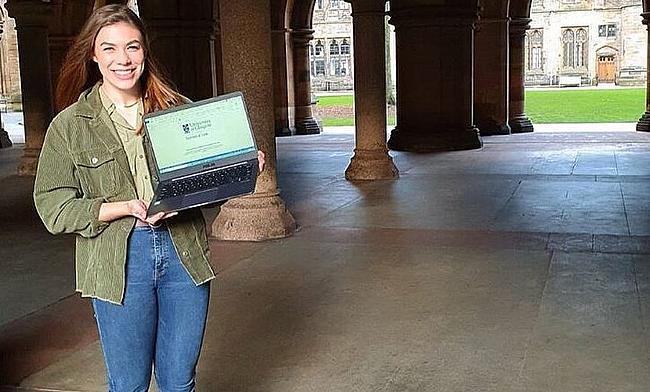 Since midway through 2016, Louise McMillan has earned 22 full caps for Scotland, helped the national sevens team put in some great performances and lifted numerous trophies at club level with Hillhead/Jordanhill.

That is an impressive CV by the age of 23, but it is even more impressive when you consider that the back-row player has also been studying for a Law degree during that period and has had to juggle her sporting and academic aspirations consistently.

Sacrifices have been made, late night studying has been commonplace and seven-day weeks with little rest have been par for the course, but McMillan would not have had it any other way.

During the lockdown and subsequent phases, she managed to complete her course at Glasgow University and she will soon be starting to work at Morgan Stanley where she recently completed an internship as part of her degree.

And despite the next chapter in her life about to get underway away from the pitch, McMillan will certainly not be taking her foot off the pedal rugby-wise.

“It has been four years of ups and downs, but it has been so worth it,” McMillan told TRU.

After four years, twenty-two international rugby caps, one term-time internship, ten countries, three seasons as club captain, one email from a law lecturer advising to quit playing rugby, countless Lidl pastries, one box of black hair dye, three flats, one global pandemic, two weddings and one broken scapula later I’ve graduated university. Big shout out to all my loved ones, I could not have done it without you all (even if at times I did completely ignore your advice and committed acts of self sabotage) Word of advice for any wannabe law students/ rugby players - make friends with the smartest person in the room ( @lydia.murchison )

“I finished school in 2015 and took a year out before going to university when I worked at law firm Pinsent Masons and that was really good for me at that age. It gave me experience of working life and also gave me experience of balancing my rugby commitments with other things because I was in the Scotland under-20s squad at the time.

“Then things really started to take off midway through 2016 when I began university and my rugby started to ramp up.

“I went into halls of residence, but I was not really living the ‘freshers’ lifestyle at all, I was first to bed and first to get up - it was worth it all when I earned my first full Scotland cap against Spain though [in November 2016].

“That was a World Cup qualifier at Scotstoun and to be starting for my country in such a big game in my home city with my family and friends watching me was an amazing feeling.

“My family and friends helped me then and they still help me now when I have tough days or the balance between rugby and law is tricky, so every time I represent my country I do it for them.

“Halfway through 2016/17 I learnt to drive because before that, my poor parents had to drive me to the gym early in the morning and then after uni, I was running to Glasgow Central station to get through to Murrayfield for training before getting a lift back from [then Scotland team mate] Lindsey Smith - full on days!”

“I was always spinning plates - and a broken scapula didn’t help!”

Being part of the Scottish Rugby Academy set-up and the national team often training at Scotstoun around big matches has helped McMillan, but there have definitely been highs and lows.

“I always knew that February/March each year was going to be a tough time because we are so busy with the Six Nations and it was also the build up to uni exams,” the player explained.

“I missed large chunks of uni for 10/11 weeks and then after the Six Nations had to quickly reset and get ready for exams.

“We’d be flying off to Italy for a Test match on a Thursday for example and that morning I’d also have an essay due to be handed in so at times that sort of thing could be a bit overwhelming - everything seemed to happen at once - but I managed it somehow.

“Players were also becoming professional and a lot of the national team squad were moving down to play in the Premier 15s while I was studying, but I was committed to my degree and wanted to finish it in four years as well as keeping my rugby at as high a level as I could.

“The other girls in the Scotland squad who were going through degrees and that type of pressure too were helpful in that regard because they understood where I was coming from while the coaches and other players were as helpful as they could be around the situation.”

A low point for McMillan came in January 2019 when she broke her scapula [shoulder blade] in a match away to Spain in Madrid.

“It was a really tough one for me because I had never broken a bone before and I remember being miserable at the airport that night because the medical team were saying it was quite a complex injury,” she recounts.

“It is tough flying back the day of a match and then having to go to uni or work the next day and that was definitely one of the toughest times.

“During the last year while I have been completing the degree, Tyrone Holmes, a member of the Scotland coaching team who also works with the Glasgow-based players, has been really helpful.

“He is easy to talk to and understands that we have other commitments to think about too. Don’t get me wrong, when we train with him, we train ‘full on’, but he appreciates the balancing act that some of us were trying to keep up with and helped us find the best solutions.”

“Nothing beats the buzz of playing for your country”

McMillan first began playing at local club Birkmyre and her love of the sport grew from there.

“I was involved in the minis, but it was always with boys and I hated it because the boys would never pass to me,” she recounts.

“I stopped playing, but my sister Siobhan stuck at it and started to get really, really good. By then she was playing in a girls team and it looked so much fun playing with friends so I came back in and got involved in rugby again.

“My journey then continued at Hillhead/Jordanhill in my later teens and it has been a privilege to play there and be captain of the team.

“Siobhan is the most supportive sister and when I got capped, she was nothing but encouraging to me. Then to play together for Scotland a few times a couple of years ago was amazing.”

Details have been finalised regarding Scotland’s upcoming Six Nations schedule with Philip Doyle’s charges taking on France and Wales at the end of October before facing Italy on December 5th.

Scotland will have a busy time ahead another target for them and McMillan will be qualifying for the 2021 World Cup.

“It is going to be busy probably, but I just want to stay focused and make sure I can play my part,” McMillan said.

“Nothing beats the buzz of playing for your country and we feel that we have a squad and culture now that can help us continue to get better and compete with the best sides around.”