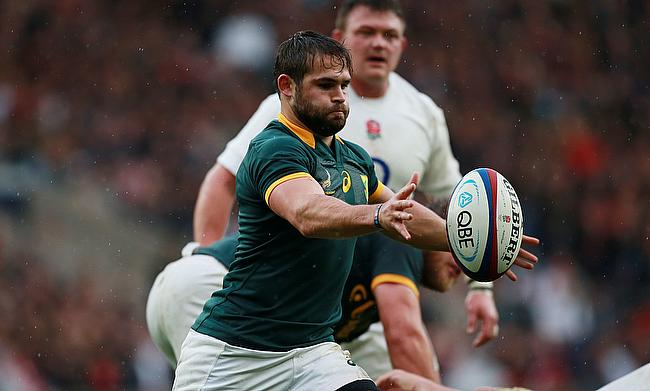 South Africa international Cobus Reinach has announced his departure from Premiership club Northampton Saints at the end of the ongoing season.

The 29-year-old started his professional rugby debut with Sharks in 2011 and has represented them in Currie Cup and Super Rugby before heading to Franklin's Gardens ahead of the 2017/18 season.

Since his move to Northampton Saints, Reinach has made 70 appearances for the club in which he scored 29 tries.

“I love playing for Saints and living in Northamptonshire. We have a fantastic group of coaches and staff, and an exciting squad that I believe can challenge for the major honours, so this has not been an easy decision for me to make," he told the official website of the club.

“I’d like to thank everyone for making the last three seasons so memorable; I’ll be sad to leave some great friends and teammates.

“Saints will always have a special place in my heart and I look forward to giving everything I’ve got to make sure we finish the season with some silverware.”

The 5ft 9in scrum-half went on to make his South Africa debut in 2014 and has featured in 14 Tests in the last five years with his last appearance coming during the recently concluded World Cup in Japan.

“While we’re disappointed to lose a player of Cobus’ quality, we respect that in the final years of his professional career he’s made a decision with the long-term future of his family in mind,” said Saints director of rugby Chris Boyd.

“Saints supporters love watching him play; he has provided them with plenty of memorable moments here at Franklin’s Gardens".

Northampton Saints currently are at the second position in the Gallagher Premiership table with six wins from eight games while they are second in Pool 1 of the Heineken Champions Cup with three victories from five matches.