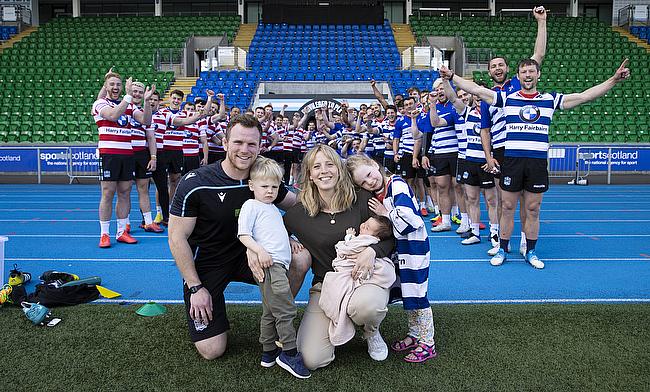 Last week it was announced Chris Fusaro would be moving away from professional rugby after 11 years with Glasgow Warriors and this week, he has been busy moving house.

Unpacking boxes may not be as glamourous as making a turnover in a big game, but the openside who earned four full Scotland caps in 2014 has never been afraid to roll his sleeves up and get on with the job in hand on or off the pitch.

As a result, he is excited to be relocating his young family from Glasgow to the picturesque Fife village of Falkland which is near where he grew up in Cupar. It will also allow him to join the family business and forge a new career path.

“Not many people get to play the sport they love at a high level from the age of 18 to 31. I have had my highs and lows with injuries for sure, but in general, I have been very lucky.

“Over the last couple of years, the old bones have started to creak a bit more than previously and it is nice to be able to step back on my own terms.

“I have so many good memories from over a decade at Glasgow with the Warriors. When I joined, we were training all over the city and playing our home games at Firhill whereas now the club has an amazing home at Scotstoun.

“Not many moments over the years got me as emotional as last week, though when I came out of the tunnel at Scotstoun and there were all my teammates in Howe of Fife strips.

“The Howe is my local club and the one that myself and Pete Horne came through at together and he had arranged it. It was such a nice touch and I think a few of the Glasgow boys had to breathe in to fit into the shirts!

“It was a lovely moment and for my family - wife Katie, Sofia who will be five in June, three-year-old Freddie and seven-week-old Nora - to be there too made it extra special.

“I shall never forget my days as a Warrior, but I am excited for the future now.”

Moving into the family business: “I am really excited about this challenge”

That future Fusaro mentions will see the family business taking up a lot of his time.

Since 1981, Luvians Bottle Shops in Cupar and St Andrews have specialised in the very highest quality of whiskies, wines, beers and spirits from all over the world.

In St Andrews, there is also the Luvians Café while well-known ice cream is made daily on the premises in Cupar.

“My Dad Luigi is 67, my Uncle Tony is 69 and my Uncle Vince is 71, the business has been their life for such a long time and they have put so much into it so now it is time for the next generation to get involved and help take things forward and keep up their high standards,” Fusaro, who played for Scotland Sevens in his early years of senior rugby, explains.

“Myself and my cousin Emili want to learn as much as we can from them over the next couple of years and then they can start winding down and enjoy the retirement that they have worked all their life for.

“I am really excited about this challenge. Given my Italian heritage, I have always been really interested in food and having watched the care and attention my Dad and my Uncles have given the business, it inspires me to want to keep things going and learn the trade.

“It will be good for me to have a challenge away from rugby to really get my teeth into while I am looking forward to spending more time with Katie and the kids in Fife as they get older and start school and such like.”

Hamish Watson: “People don’t realise how strong he is. He can make his mark with the Lions”

After his Glasgow contract finishes in June, Fusaro will become a rugby fan like the rest of us and he is looking forward to watching the British & Irish Lions in action.

And one player in particular who will grab his attention will be fellow Scottish openside Hamish Watson.

“We were obviously in a few Scotland camps together and have played against each other quite a few times and when he was younger, I just couldn’t understand why he didn’t get more of a chance with Edinburgh,” Fusaro said of the man two years his junior.

“When his chance came, he certainly took it and he has made the number seven jersey with Edinburgh and Scotland his own in recent years.

“People don’t realise how strong he is. He can make his mark with the Lions for sure. He is just so hard to stop and has a great engine.

“It is great to have eight Scots on the tour. Obviously, I know Zander Fagerson and Ali Price really well from Glasgow and I am chuffed for them, but I am pleased for all the Scots picked because their form has given them this chance.”

Nothing compares to this! The moment I was selected to represent @lionsofficial, captured exclusively by @VodafoneUK. I’m beyond honoured & can't wait to get started! As a Vodafone Ambassador for the British & Irish Lions, I'm excited to take you all on the journey #UniteThePride pic.twitter.com/GDPUvwgUnC

Glasgow have never struggled for back-row quality in the last 11 years Fusaro has been part of the Warriors set-up - and there are three young players that he has high hopes for once he has retired.

“Matt Fagerson is a good guy, he has come on loads recently and he is still just 22,” Fusaro states.

“He has pushed on and claimed the Scotland No.8 shirt and if he can stay clear of injuries, then there is little doubt in my mind that he can be a Lion in the future.

“In terms of number sevens, well Tom Gordon is a brilliant young player. Coming from New Zealand originally, he has great skills and he is such a good all-round player.

“He is physical, abrasive and I think he is going to go really far and hopefully play for Scotland soon.

“And then there is someone like Rory Darge [the 21-year-old former Scotland under-20s captain] who is just coming through. He didn’t get much game time when he was at Edinburgh, but he has switched to Glasgow and showed a couple of weeks ago against Edinburgh just how good he can be.

“He was outstanding in that game. I look forward to seeing the three of them kick on in the next few seasons.”