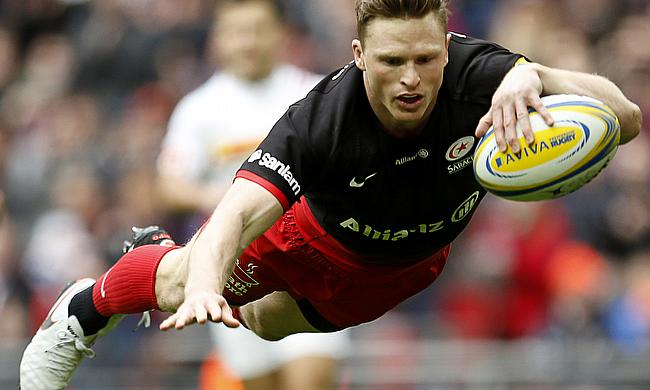 Chris Ashton hopes he is timing his run to perfection as he plots his England comeback on the summer tour to Australia.

The Saracens wing crossed twice in Saturday's 22-12 Aviva Premiership victory over Harlequins to lift his tally since completing a 10-week ban for making contact with the eye area of Ulster's Luke Marshall to five tries in three matches.

The suspension, which forced him to miss the RBS 6 Nations, has left him fit and hungry and England head coach Eddie Jones has been in regular contact by text message, with the 29-year-old's international return growing even more likely.

"Thankfully I've come back at the right time of the season with the big games. It's easy for me coming back into a team doing so well," Ashton said.

"I appreciate the texts from Eddie but I think he's pretty straightforward in saying that the people who will go on tour are the people who are playing well.

"So as much as he talks and tells the lads what they're doing I think he'll know the people who are doing well at the end of the year.

"It's down to me to keep going as I am and hopefully I'll get the chance in the summer."

Ashton's next opportunity to impress Jones is Saturday's Champions Cup semi-final against Wasps, who have risen to second in the Premiership after wing Christian Wade ran in six tries against Worcester on Saturday.

"We'll be opposite sides of the field but to score six tries is amazing. It does make me feel a bit jealous! But he's in the same position I am really, playing in a good team," Ashton said.

"When you're in a good team you get a lot more opportunities but six tries is impressive.

"I might see him a few times. He tends to stay on his wing a lot more but that's where he's good in that little outside channel."