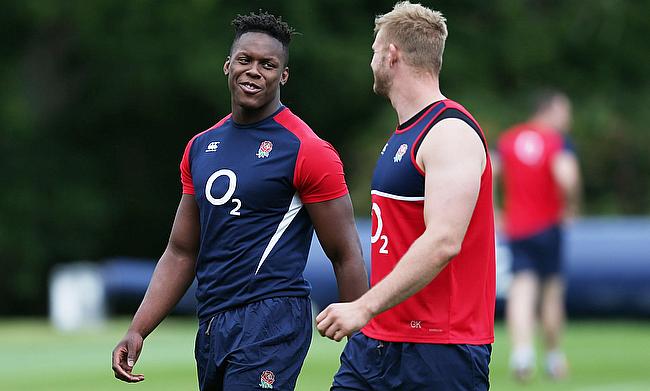 Jamie George set to boost Saracens' push for silverware
Ashton scores the game-deciding try as Saracens pushed all the way by Northampton
Chris Ashton on his return to form #AshtonsBack
Can anyone stop Saracens from winning the Aviva Premiership title this season?

The European Champions Cup semi-finalists announced that 21-year-old Itoje and Kruis, 26, will remain at Allianz Park until at least 2019.

The second-row pairing proved an integral part of England's title-winning RBS 6 Nations team this season, when a first Grand Slam since 2003 was also achieved.

Itoje and Kruis both progressed through the club's academy system, and they follow fellow internationals like Billy and Mako Vunipola, Duncan Taylor and Jamie George in signing new Saracens deals.

Itoje made a spectacular arrival on the Test match scene this season, delivering an immense display in the Twickenham victory over Wales last month, while Kruis was viewed in many quarters as being unlucky to miss out on Six Nations player of the tournament honours, so effective were his performances.

Under new England head coach Eddie Jones, their second-row partnership has flourished at the highest level, and both players will be key to Jones' plans during this summer's three-Test Australia tour.

Itoje said: "I am lucky to call Sarries home, and I am delighted to extend my contract for three more years.

"It was an easy decision from the outset, as I've really enjoyed my rugby so far, and I am incredibly grateful for the help and guidance I have received since arriving at the club as a 14-year-old.

"The club is hugely ambitious and has been competing at the highest level for some time.

"As a player, you want to be playing in the big games, and once again we are well placed in both the Aviva Premiership and European Champions Cup this season. It's a special club to play for, and I'm really happy to be staying."

Kruis also admitted his decision to stay with Saracens was a straightforward one.

"Saracens is a club that is in my heart, and I didn't hesitate to sign a new deal to stay here," he said.

"I owe so much to the club, and I am really looking forward to my future at Allianz Park. What's really important to me is that as a young group of players we are all committing our futures to the club together.

"I am playing alongside my best mates and working alongside them day-in, day-out, and that means a lot to me. We've already achieved so much as a group of players, and there is still so much more to come from us. I am delighted to be staying here."

Saracens rugby director Mark McCall added: "They (Itoje and Kruis) have been in superb form this season for both club and country. They are only going to get better and better as players, and we're excited about them doing it here at Saracens.

"Maro's progress over the last few seasons has been phenomenal.

"He has experienced a lot of big games for the club already, has played for England and is still only 21 years old, which is incredibly exciting. In George, we have one of the finest lock forwards around, a player who has shown consistent improvement year on year and still has so much more to come."