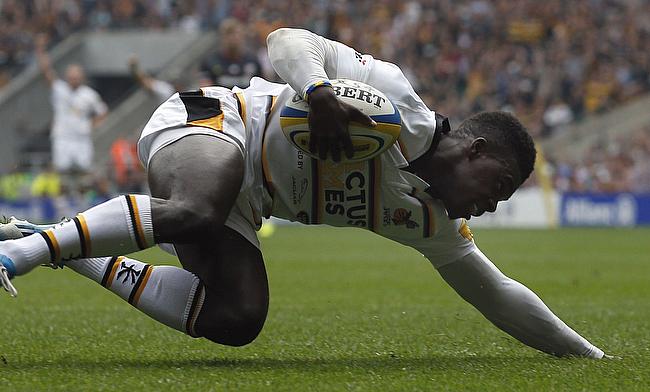 A six-try outburst from Christian Wade - tying a Premiership record - led the charge as Wasps climbed to second in the table with a thrilling 54-35 win over Worcester at Sixways.

Wade's stunning performance matched the mark set by Ryan Constable for Saracens against Bedford in 2000 and ensured Wasps moved above Exeter in the table following the latter's defeat to Gloucester on Friday night.

It was also only the second time that a player had scored four first-half tries in a Premiership fixture, the other being Tom Voyce for Bath against Rotherham in 2001, as Wade marked his 100th appearance for Wasps in style.

Frank Halai and Alex Lozowski also crossed for Wasps, who played brilliantly at times to run Worcester off their feet, but the home side were able to earn a bonus point with tries from Francois Hougaard, Cooper Vuna, Andy Symons, GJ van Velze, Bryce Heem and Carl Kirwan.

And it was Worcester who took the lead when Ryan Mills slotted over a second-minute penalty.

However, Wasps, who suffered a late blow when last week's European Champions Cup hero Jimmy Gopperth withdrew with a back problem to be replaced by Ruaridh Jackson, hit back emphatically.

A clever kick from Dan Robson secured his side a platform in the home 22 and, when the Warriors lost the line-out, a well-judged pass from Robson sent Halai over for the first of the afternoon's fourteen tries.

Wasps further increased their lead in the 15th minute when Wade opened his account for the afternoon.

Rob Miller evaded a tackle from Mills to send Robson away before the scrum-half provided Wade with the scoring pass. Jackson's conversion gave the visitors a 14-3 lead at the end of the first quarter.

Wasps had much the better of that opening period but an error from Robson brought the hosts back in contention.

His clearance kick was charged down by Darren Barry before Hougaard crashed over from close range for Tom Heathcote to convert.

However, back came Wasps to score their third try soon after.

This time a kicking mistake from Heathcote provided the opposition with another good position in the home 22 and Robson took advantage to send Wade in for his second try.

Worcester were being run ragged and by the 29th minute Wasps had their bonus point in the bag.

The visitors moved the ball swiftly along the line for Wade to chip ahead and collect to complete a 13-minute hat-trick.

A thrilling first half continued with two more tries in quick succession, one for each side.

First Vuna finished off a flowing Worcester movement before a clever chip from Daly gave Wade his fourth and his side a 33-15 interval lead.

Warriors made three changes in quick succession at the start of the second half in an attempt to stem the tide and were rewarded when one of their replacements, Symons, crossed for their third try.

Any thoughts of a comeback from Worcester were quickly dispelled however when Wade intercepted a Mills pass to race away for his fifth score.

Another interception, this time from Charles Piutau, and some unselfish play led to Wade's sixth and final try of the day - all of which came before the hour-mark.

The 11th try of the game came from Warriors captain Van Velze to give his side a bonus point but Worcester still trailed 47-25 at the end of the third quarter.

In the final quarter Heem and Kirwan scored two more tries for Worcester, with Wasps replacement Lozowski crossing in-between for the visitors, as a breathtaking game was brought to a close.