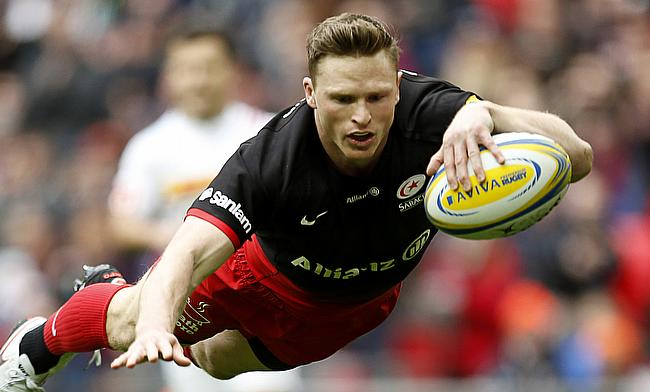 A crowd of 80,650 saw Ashton plunder two first-half tries and lift his total since returning from a 10-week ban for eye-gouging to five in four games.

Eddie Jones was not present to see Ashton's finishing but at this current rate the rugby league convert is a certainty to tour Australia in June having been overlooked for this year's Six Nations.

The result means Saracens are now four points clear of second-placed Wasps at the summit of the Premiership table, while Harlequins' hopes of finishing in the play-offs are remote with two rounds remaining.

One loose pass aside, Billy Vunipola was outstanding and the most imposing back row on the pitch against competition that included Quins' rival to his England number eight jersey Jack Clifford.

Vunipola was prominent as Saracens made a bulldozing start and a couple of his strong early carries helped create the platform for their first try.

Ashton had stationed himself in midfield and as the ball was threaded wide he drifted to the touchline where he took the final pass from man of the match Alex Goode to cross in the corner.

Two penalties from Ben Botica gave Quins the lead heading into the second quarter but captain Danny Care was the victim of a clever opportunist score from Kruis.

Quins stole a line-out close to their line and as Care began to move left to clear, Kruis grabbed the England scrum-half after timing his run to perfection to strip the ball and fall over the line.

There was more craft about Saracens' third try as they counter-attacked from inside their own half with the footwork, strength and vision of hooker Schalk Brits offering Ashton a simple finish.

Goode lost a footrace to Ross Chisholm as the two sought to gather a low punt destined for Saracens' line but the Harlequins wing's kick pushed the ball into his rival's path and that chance was gone.

Conor O'Shea's visitors were enjoying the better of the third quarter but they were leaving the opposition 22 without troubling the scoreboard.

Having weathered the storm, Saracens suffocated the life out of Quins by camping themselves around the 22 and although they only led by seven points they never looked like conceding.

Farrell put daylight between the rivals from the kicking tee before Botica failed with a late shot at goal that would have secured a losing bonus point.