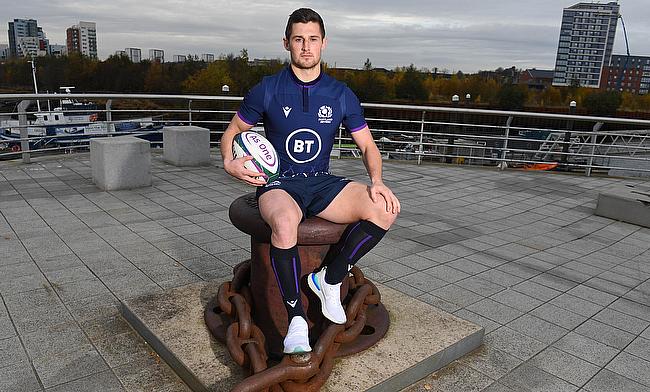 Wilson-Hardy: We have been chomping at the bit to get out there
World Seven Series: Dubai Preview
'Keys to the kingdom are through Sevens' - Friday
From Dubai to Tokyo - The Sevens season clicks into gear

Thursday not only sees the start of the men’s HSBC World Rugby Sevens Series for 2019/20 in Dubai, it also sees the selection process for the Great Britain squad that will go to Tokyo in 2020 begin to hot up.

England Sevens boss Simon Amor has been named head coach for the GB men’s programme leading into the Olympics which take place in Japan in July and August next year.

Amor led Great Britain men’s team to a silver medal at the Rio Olympics in 2016, losing the final to Fiji, and he will be wanting his next group of players to go one better.

To that end, the players from England, Scotland and Wales will be keen to impress him over the 10 World Series events which run from now until May, concluding in France.

In 2016 two Scotland players, Mark Robertson and Mark Bennett, made it to the Olympics - and current national team sevens captain Robbie Fergusson believes there are players within his squad that can push for inclusion this time around.

“I 100% believe there are guys in the Scotland squad who can push for Great Britain selection,” Fergusson, the 26-year-old who will be playing in his 20th World Series event in Dubai, told TRU.

“Mark Robertson [now retired] and Mark Bennett [with Edinburgh Rugby] made the squad for Rio in 2016 while other guys like Jamie Farndale and Gavin Lowe [both still in the core Scotland Sevens squad] were part of the wider training group and just missed out.

“There is a massive motivation for all of the boys to make the Team GB squad for Tokyo.

“Personally, I am focused on having a good year and putting my first foot forward. It would be amazing for some of us to make the GB squad, but firstly we have to put in good performances in a Scotland shirt to be on the radar for selection.

“Opportunities will definitely arrive and if we are performing well for Scotland then we can make it hard for the GB coaching staff and selectors not to look at us.”

When Bennett was selected in 2016, he was plucked straight from XV-a-side rugby to join the squad that went to Brazil.

With the sevens game ever changing is that something that would be possible four years on or will the Great Britain squad be made up of sevens specialists?

“I think at the last minute it could potentially be difficult for any player to make the switch from 15s to sevens, it depends on what type of player they are,” Fergusson explained.

“If you look at Mark Bennett, his game is based very much on attack and good feet so people like him and George Horne [Glasgow Warriors] could potentially make the switch back to sevens if required because their game is tailor made for the format.

“However, I think it would be harsh on any player to ask them at the drop of a hat to make the switch and for players without a background in sevens like those two - or the required skill set - it would be difficult to transition to the seven-a-side game.”

After leading Scotland to a 10th place finish on the circuit in 2018/19, John Dalziel moved on to become forwards coach at Glasgow Warriors.

He was replaced in the sevens job by 33-year-old Ciaran Beattie, a former Scotland Sevens player himself, and Fergusson and co are enjoying working with him to date.

“Ciaran is a different type of coach than John with different philosophies, but everyone has bought into what he is wanting to do so far,” Fergusson said.

“We are focusing a lot on a team mentality and really pushing each other out of our comfort zones and leading up to this first tournament everything has been really competitive in training which is what you want.

“For myself, it’s a huge honour to represent Scotland and being captain is something that I’m very proud of.

“We’re a tight knit group that have trained hard over the past few months and we’re all excited to test ourselves against the most talented Sevens players in the world.

“As a group, we want to show progression throughout the season, starting with these opening tournaments in Dubai and then Cape Town [December 13-15].”

For the Dubai tournament, Femi Sofolarin, who played for England last term, makes a Scotland debut along with Marr’s Scott Bickerstaff. Edinburgh Rugby’s Dougie Fife is released for the event and Jed-Forest’s Callum Young is 13th man.

Of the core 14-man squad for the season, those missing this time are last year’s co-captain Jamie Farndale and Ally Miller (both with Edinburgh) and Nyle Godsmark (injured).

“The effort and application I’ve seen from this group so far has been exemplary,” head coach Beattie said.

“They have bought into the way I want to train and approach games, so it’s about putting into place our structures and expressing ourselves to the very best of our ability.”

Scotland squad for the Dubai Sevens:

Scotland’s Pool B fixtures in Dubai:

The Dubai Rugby Sevens 2019 runs from Thursday until Saturday