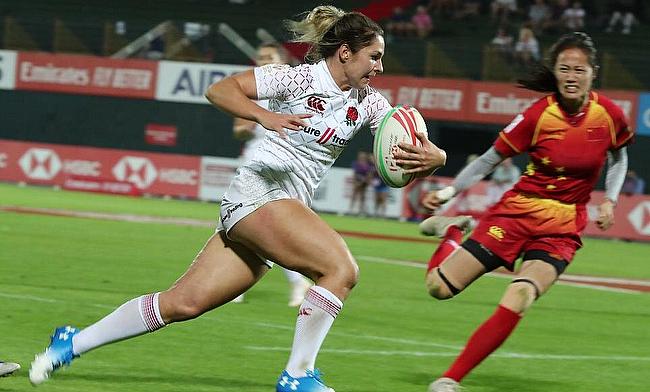 Whilst the Dubai Sevens this weekend is going to be the first leg of the Men’s World Series, it was the women that kicked off the Sevens calendar in early October.

Twelve teams battled it out in the early autumn Colorado sun, with the host nation, the USA, garnering all 20 points by winning in their own back yard.

England didn’t fare quite as well, though. Losing to both Russia and New Zealand in their pool, Charlie Hayter’s side finished ninth overall, beating Japan 36-14 to win the Challenge Trophy.

Not an ideal start to the season, but solace can be taken from knowing a young coach will have learnt from those experiences.

“Colorado feels so long ago now with it being so early on in the season,” England’s Amy Wilson-Hardy started. “We’ve kind of been chomping at the bit to get out there especially now, with a big block of rugby under our belts and I think the squad is in really good shape to hopefully improve on our last performances.”

Playing in her seventh Dubai tournament this weekend, Wilson-Hardy has been a mainstay of this England Women’s Sevens side for some years now. Claiming a bronze medal at the Commonwealth Games last year for England, the wing also played in the Team GB side that fell just short to Canada at the 2016 Olympic Games.

With the Tokyo Games just nine months away now, the former Worthing Raiders youngster admits that making consecutive Olympic Games is a goal for her.

“Obviously I’ve had a taste, an experience, and it’s incredible,” she said. “Not only from a personal level, the prospect of having that goal to aim for at the end of the season means I am also extremely excited for the squad.

Finishing sixth overall on the World Series last year, similarly to the men, England’s women had to win a Rugby Europe qualification tournament in order to book Team GBs place in Tokyo.

“He has come in and made some really good changes,” Wilson-Hardy said. “Everyone is really excited because the way he coaches is getting a lot out of us. It is just as much a journey for him as it is for us and I know that his competitive nature as an athlete will help being the best coach possible.”

When the Women’s World Series resumes on Thursday, it will have been two months since the Series opener in the States - not that some of the sides haven’t been in competition.

England, USA, Ireland and France fought things out at the O2 in the first edition of RugbyX. England took home the title that day, but it is the USA that everyone has to be wary of.

Their victory against Australia in Glendale came as a shock to many. Traditionally the USA haven’t been one of the stronger teams but have made gradual improvement since the inception of the competition in 2012.

“I’m showing my age here, but this will be my seventh Dubai,” Wilson-Hardy said. “To think that it was my first World Series back in 2013, to now, where the game has gone. Your stats, fitness levels, it has gone through the roof. The skillset and rugby on show is incredibly thrilling to watch and I think it is an exciting time to be in women’s sport in general.

“You see a huge increase in talent, physicality, fitness and everything every year and you have got to stay on your toes because there is no easy game anymore. If I’m honest, there was before and you’d go into tournament knowing you’d get out of the pool and from experience, we’ve been on the wrong side of that.

“You’ve got to turn up every single game. Every team is capable of turning over somebody else. Even the perceived underdogs have hugely talented squads, so it makes for a really exciting tournament.”

Drawn in Pool C alongside New Zealand, France and Japan, Dubai looks to be a difficult draw for England’s women. Having not finished in the top three of the World Series since 2013, Wilson-Hardy insists that although she and her teammates want to win every tournament, they will largely be focusing on performance rather than places.

“We want to see improvement. It is definitely going to be a performance focus and we’ve got to put it in perspective. At the same time, we are competitive athletes. We want to win things, so I think we’ve just got to go out there, play knowing how we can play and try and get some consistency.”