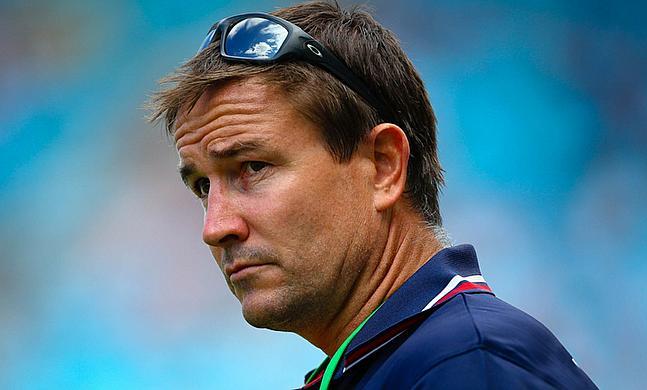 When Mike Friday took charge of the USA 7s programme, the team had just finished 13th in the World Series, only amassing 41 points over the 2013/14 season. After a year under Friday, the teams’ improvement was clear to see.

Finishing sixth and fifth for four consecutive years, it was the 2018/19 World Series that secured USA Rugby as a Sevens powerhouse. Finishing second, the Eagles reached the semi-finals at all 10 stops on the World Series.

“We were the only team to make all 10 semi-finals, so our consistency was great,” Friday said.

28 captains came together for a truly epic captains photo at the Burj Al Arab. The #Dubai7s gets started this Thursday.#HSBC7s pic.twitter.com/GwNdbffY7C

“We should have put Fiji away in the semi-final, we made mistakes in those moments and they won that tight semi-final in Hong Kong. That gave them the belief to kick on. We had two epic semi-final games in London and Paris and they won them both. That’s where they won it.

“We have looked back and there were areas of our game that we needed to tighten up on that would have allowed us to probably put the foot on the throat to kill off Fiji, that we didn’t take.”

At the end of the season, it was just nine points that separated champions Fiji and Friday’s USA team. The Olympic champions had won five legs of the Series whereas the USA had won just one.

Winning the Las Vegas Sevens, many expected the side to carry on with their strong early season form. However, an injury to Perry Baker proved more costly than previously thought. Breaking his jaw in Nevada, Baker was unable to play until the London leg in May.

Finishing in the top four of the World Series guaranteed the USA a place at the 2020 Olympic Games, with Fiji, New Zealand and South Africa also securing their spot in Japan. With England, Samoa and Australia all in hot pursuit of an Olympic slot last year, Friday expects another competitive campaign on the Series.

“This year is going to be very different,” Friday said. “South Africa, I think, will be insanely strong. You’ve got New Zealand, Fiji as always, Australia will be interesting, you’ve seen the emergence of Samoa, France, England are consistent and will the resurrection of Kenya ever happen?

“That’s the beauty of the World Series. There are 10, 11 teams that are all capable of winning a tournament. Let’s talk about Spain, the most improved team last year, making quarter finals, developing and evolving, so I think it makes for a healthy competition in an Olympic year.”

Since Friday took charge, there have been two editions of professional rugby in America. Whilst Major League Rugby is going strong, PRO Rugby lasted just a few months with several players reportedly not being paid for their efforts.

As a result of MLR, the 15s team experience improved results in their internationals, but Friday believes that the key to engaging the American public is through the seven-a-side game.

“I think the keys to the kingdom are through Sevens,” Friday said. “That is the Olympic dream and that is more akin to the American sporting landscape and public. They associate with the Olympics, the harsh reality of the 15s game is that it isn’t ingrained at a high school level.

“The model is very different to the traditional rugby countries. We’ve got to get rugby part of the high school curriculum between the ages of 13 and 18, let them go try to become these NFL or NBA players, then hope they come back to the game if they don’t make it.

“There are 50 states, but there are only about eight or nine hotbeds. Those states are countries within themselves, so if we ingrain and grow it there, then all of a sudden, we grow a rugby population that has rugby EQ (Emotional Quotient), as well as the sporting capability.

“We will then be serious contenders, certainly on the sevens circuit. We can then grow those front five athletes that will let us break into the 15s and that is the reality. The front five determines how much possession we have and we haven’t got the rugby EQ or the know-how at the moment to deliver that strength in depth like traditional rugby powers.”

For the Dubai Sevens, the USA have been drawn alongside Australia, Scotland and World Series new boys Ireland.

Playing Ireland on the opening day of the tournament, Friday will no doubt hope that his side can better last season’s second place finish ahead of what will be a hotly contested Olympic Games in Tokyo.