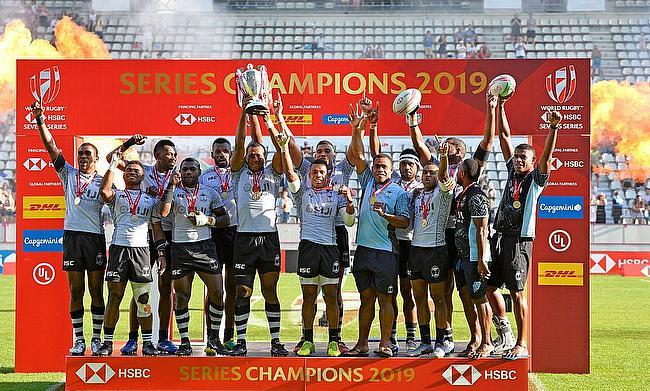 The first of six combined men's and women's events on the World Sevens Series circuit begins this week in Dubai.

Last year the men’s World Series was perhaps the most competitive in the competitions 20-year history as Fiji eventually took home the title, pipping a strong USA side to the big prize.

“The USA Eagles were remarkable last season, inspiring not just American fans, but people all over the world,” World Series commentator Dallen Stanford said as he reflected on another impressive campaign from Mike Friday’s side.

“We said in 2016 how both women's and men’s US teams needed to medal to put rugby on the map in the States and whilst that didn’t happen, it is phenomenal that both squads came second on the Series last year.

“This bodes extremely well for Tokyo 2020 and of course for the World Series title, which is important, but not as much as the Olympics in the eyes of the American public and sponsors.”

The USA are continuing to make strides on the World Sevens Series circuit and in an Olympic year, head coach Mike Friday hopes his side can maintain their improvements #Dubai7shttps://t.co/B65j2lOQXk pic.twitter.com/tpUtG8eEvY

Ireland have become a core team on the Series after qualifying in Hong Kong in spring. Having impressed as an invitational side over the past couple of years, Anthony Eddy’s team have rightfully taken their place as one of the 15 core teams in the competition and can expect to impress given strong outings in London and Paris.

“I love that Ireland will now be a core team on the Series! Several of their players have featured at the RugbyTown 7s in Colorado for the Ramblin’ Jesters over the past three years, lighting it up like a Christmas tree and I expect big things from them,” Stanford said.

England will be hoping that their injury woes will be behind them. Captain Tom Mitchell will be unavailable due to injury, meaning that young star Tom Emery will see increased pitch time with playmakers Dan Bibby and Ollie Lindsay-Hague.

It was a difficult year for England last term with much of the squad unavailable due to injury for large parts of the season. Finishing fifth overall, it was late on at London and Paris when injury really took a hold of Simon Amor’s squad, placing 12th and 14th at the closing two tournaments of the World Series season.

Competing in Pool D, England will face stern tests against sleeping giants Kenya, Spain and three time Series champions South Africa. South Africa will be buoyed by the return of Rosko Specman and Seabelo Senatla to the Blitzbok setup after time away from the Series with Super Rugby franchises.

Ireland have been pooled with Australia, Scotland and the USA, which will no doubt test their mettle as a new Series side. Having clearly worked on their defence over the summer, which could be best seen in their Athlete Factory Sevens win in October, the team will fancy their chances after several years of gradual improvement.

After the final whistle.

After England’s win on Sunday even ending I spoke to some of the people heavily involved.

Many thanks to everyone who was up for a chat, it doesn’t go unappreciated.https://t.co/sIoG9Pt6VR pic.twitter.com/Ds6c0bzq2S

Mike Friday’s USA side will be hoping to start this campaign in a similar fashion to the last. Finishing second in Dubai last year, the States placed in the top two at the following four stages of the World Series. Scotland will be hoping to better their 10th placed finish on the Series with a good start in the UAE with former England man Femi Sofalarin now amongst their core players.

This will be the women’s second run out of the season after the Glendale Sevens at the start of October. It was the USA that garnered all 20 points for winning their leg of the Series and like their male counterparts on the World Series, the USA finished second overall last season and their performance in Glendale really set out their stall in an Olympic year.

In Pool A alongside consistent performers Canada and the often-improving Russia and Brazil, escaping the pool is by no means a given, but Chris Brown, last season’s Coach of the Series, will fancy his sides chances.

Elsewhere, Ireland’s women play current Olympic champions, as well as livewires Fiji and Spain in Pool B. The Irish are the only team to have played any competitive rugby having been part of the inaugural RugbyX competition at the O2 Arena in late October.

England have perhaps the most difficult pool to escape. Needing to overcome both New Zealand and an energetic French team that placed fourth in Colorado. With Sydney Gregson, Ellie Kildunne and Holly Aitchson all out with injury, the younger players in Charlie Hayter’s squad will have to step up if they want to surpass expectations in Dubai.