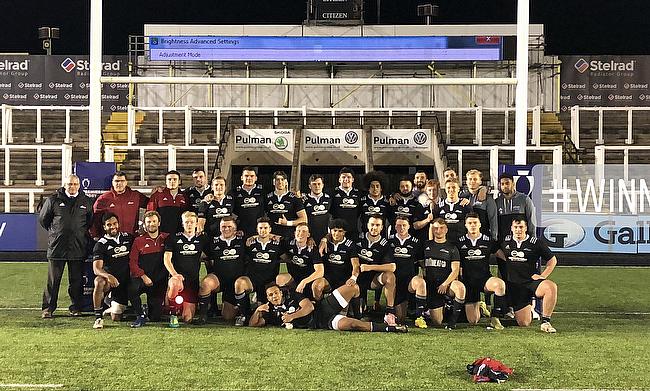 Northumbria University are the early leaders in BUCS Super Rugby after an enthralling victory against Hartpury University at Kingston Park.

Darren Fearn’s side ran in five tries to beat the current champions and earn their second bonus-point win of the campaign.

Domestic holders the University of Exeter remain unbeaten, but they had to settle for a draw away at Loughborough University as the Midlands outfit scored a late penalty try.

Elsewhere, Cardiff Met University clinched the bragging rights in South Wales as last year’s beaten finalists secured a 31-17 win over rivals Cardiff University while Durham University held on to seal a narrow victory against the University of Bath.

Leeds Beckett’s fixture with Nottingham Trent University was called off.

Below is a full BUCS Super Rugby round-up as well as a review from some of our featured BUCS leagues.

Northumbria University grabbed a narrow win over Hartpury University to move to the top of BUCS Super Rugby after a thrilling contest at Kingston Park.

Darren Fearn’s men were 24-14 up at the break after an entertaining first half. Josh Hodge opened the scoring from the tee for the hosts before Michael Walton, Tim Gittins and Oli Smith all crossed.

Smith doubled his tally to put Northumbria in control, but Hartpury stuck with the home side by grabbing their third try of the evening.

Northumbria extended their advantage through Newcastle Falcon George Wacokecoke and despite a bonus-point score from Hartpury, the hosts were able to hold on to clinch maximum points for the second week running.

A last-gasp penalty try saw Loughborough University fightback to claim a draw against the University of Exeter in a compelling BUCS Super Rugby encounter.

The away side took a 7-3 lead after 23 minutes as Ralph Marchant’s try put Exeter ahead following an early Josh Lewis penalty.

But, before the break, Loughborough hit back with their first penalty try of the evening to give themselves a slender advantage.

After the restart, Exeter levelled the scores through the boot of Sam Morley and the Green and Whites then went in front as Rory McMeikan dotted down.

However, Loughborough exerted pressure in the final 20 minutes and their endeavour was rewarded with a second penalty try to snatch a share of the spoils.

Tries from Zach Clow, Chris Lewis and Eduardo Balocco put Met 17-10 up at the break, with Uni responding through Cary Davies and George Thomas at a raucous Cardiff Arms Park.

Luke Northmore then crossed to extend Cardiff Met’s lead to 14-points, but their near neighbours continued to stay in the game as George Finney dived into the corner.

However, Jack Wright’s converted effort 10 minutes from time settled the Met nerves and sealed the victory for Danny Milton’s side.

Durham University held on against the University of Bath to begin their BUCS Super Rugby campaign with a solid victory at Rosslyn Park RFC.

Durham were the designated hosts for this clash after choosing the Rock as the venue to engage with their alumni and Alex Keay’s side certainly impressive in the first period.

Centre Myles Rawstron-Rudd pounced on a delicate kick through from Paddy McDuell to score the first try of the evening before the fly-half doubled his team’s advantage.

Bath hit back through Jack Davies and Tom Doughty, with the latter becoming BUCS Super Rugby’s leading try scorer in the history of the competition.

However, McDuell produced another moment of magic as he darted over to give Durham a 22-17 lead at the break.

Bath had ended the first half camped in the Durham 22, but after both sides had exchanged penalties following the restart, the north-east outfit took control of this contest as Matt Welsh sniped his way down the blindside after an initial break from Ben Stevenson.

Two late yellow cards for Durham plus a penalty try awarded to Bath did set up a tense finale in south-west London, but the men in purple kept their cool to clinch the win.

Man of the Match Jacob Collin: "I feel really happy. We have worked so hard over pre-season. We had a warm weather camp in Portugal and to get the win down in London with a couple of thousand people here is a really great feeling.

"We know we struggled last year and it is nice to have had a lot of talented freshers come up and balance that with a lot of experienced guys so we are now hoping to kick on from this first win.

Durham Head Coach Alex Keay: "At times, I thought we played some outstanding stuff. We were positive and there was good detail and we played with real energy.

"We talked long and hard about getting the collision right and winning those collision areas and I was really pleased that everyone put their shift in because Bath are good side. We had to work hard!"

Last season’s BUCS Super Rugby runners-up Newcastle University got the new campaign off to a flying start as they defeated Bishop Burton College 46-13. The north-east side didn’t look affected by missing out on a place in university rugby’s top tier and it seems they will once again be battling alongside Durham 2nds for the North A title this season.

The current champions also got off to a winning start as they beat Loughborough 2nds 34-10 while the University of Edinburgh, fresh from their Scottish Varsity win over St Andrews, clinched a 22-5 victory away at the University of Nottingham.

After finishing in second place behind Cardiff University last season, Hartpury 2nds begun the new campaign with a 47-33 win over Cardiff Met 2nds. There was also a home victory for the University of South Wales as they beat Bath 2nds 31-24 while the University of Bristol claimed a 23-5 triumph over UWE and the University of Swansea defeated Exeter 2nds 25-11.

There was better news for Exeter’s 3rds as they beat new boys Reading University 43-5 in South B with the only other result being a 31-24 win for Hartpury 3rds against Cardiff Met 3rds.

The University of St Andrews, now under the stewardship of former Scotland international Scott Lawson, began their new term with a 24-12 win over the University of Dundee. Elsewhere in this division, Edinburgh 2nds followed their 1st XV to victory after beating Aberdeen 2nds 38-5 while there were better fortunes for the University of Aberdeen’s first team as they saw off a strong challenge from Heriot-Watt University to win 29-23.