Nottingham Trent score last-gasp try to open with a victory 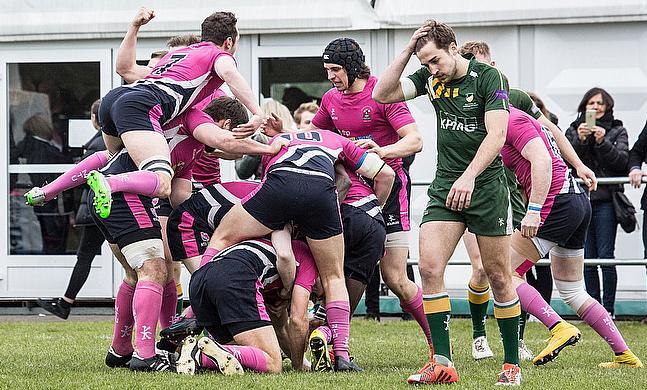 Nottingham Trent University won their opening match of the new BUCS Super Rugby season as they came from behind to score in the last minute to beat Loughborough University at Lady Bay.

Trent finished bottom of the division last year, but they have begun the 2018/19 campaign with an excellent victory on their own turf.

Reigning BUCS Super Rugby champions Hartpury University and league winners the University of Exeter both started the new term on the front foot with victories over Cardiff University and Leeds Beckett University.

Elsewhere, Northumbria University triumphed over the University of Bath as Darren Fearn’s side earnt their revenge after last year’s BUCS Championship semi-final defeat against the Blue and Golds.

The University of Exeter began the defence of their BUCS Super Rugby domestic title with a comfortable victory over Leeds Beckett.

Pierre Thompson’s early try was cancelled out by Beckett’s Chester Duff, but the hosts were able to open up a 14-point half-time lead. Thompson grabbed his second before Rory McMeikan dotted down from close range for the home side, who took control of this contest.

Great start to the season for @ExeterUniRFC , well done to @LeedsBeckettRFC who kept it physical throughout! See you at your place later on in the year and enjoy your @dominos after the game #BUCSSuperRugby #EXELBU

Two quick tries from Charlie Davies and Jack Rouse kept Exeter in the driving seat and Lasha Jaiani sniped his way over to give the Green and Whites a 40-7 advantage.

Beckett fought back with two scores of their own just after the hour, but Matt Johnson’s effort made sure of a home victory.

Cardiff led 7-3 at half-time thanks to Adam Sadbri’s try, but Hartpury hit back after the break.

Scores from Aquile Smith, Harry Wilson and Dwayne Burrows, plus a penalty try, secured the bonus-point win for Hartpury who had to fight hard to begin the new season with a positive result.

Cardiff’s only score of the second period came via Owen Williams, but the hosts will take a lot of plus points away from an encouraging performance against the defending champions.

Northumbria University have kicked off the new BUCS Super Rugby season with a victory as they beat the University of Bath in the West Country.

Tries by Hugo Stiles and Brandon Bellamin had Bath in command at 17-7, but Josh Rudling added to Lewis Berg’s earlier score to leave Northumbria trailing by three points going into the second half.

Really positive start, squad fronted up well! Onto a tough game vs hartpury next week. Big Well done to the debutants!! ???? https://t.co/wmsKHsGTNV

Stiles and James Elliot exchanged penalties after the break before George Williams got a third try for the visitors to give them the lead for the first time in the contest.

Elliot was then able to extend Northumbria’s advantage as he latched on to a loose ball before squeezing over the whitewash to touchdown with 10 minutes remaining.

Stiles did land another penalty to give Bath hope, but Northumbria kept them at bay as last year’s league runners-up clinched an opening day win.

Team Bath coach Mark Lilley speaking to the club’s website: “There were plenty of encouraging signs out there but we’ve missed a lot of opportunities, particularly in the first half.

“We built pressure on them but there were a couple of moments that let us down and we probably weren’t effective enough on our attacking breakdown.

“We had 14 debutants tonight and, despite the result, the boys will take a lot from that game. I thought we showed some really positive character and there is plenty to build on.”

James Gallagher had touched down to give Loughborough a five-point lead in a dramatic final 10 minutes, before Goble’s decisive score.

Trent, who won just two domestic games last season, were behind at the interval as a try from Jamie Jack and Will Sutton’s penalty were cancelled out by Cameron Boon and Josh Lewis.

FULL TIME | Last gasp victory for @NTURugbyUnion as they take the win in the dying embers of their opening #BUCSSuperRugby fixture! ??

However, the hosts flew out of the blocks at the beginning of the second period as quick-fire scores from Cecil MacCarthy and JJ Broberg gave them a 22-15 lead.

Loughborough responded as Will Attfield rounded off a slick move and when Gallagher dotted down, the visitors thought they had sealed victory.

But, there was to be one final twist in this enthralling fixture as Goble ran a superb line to dart over and Matt Ridington held his nerve to add the extras.

Nottingham Trent coach Alex O’Dowd: “Loughborough played really well and it was a cracking game. It could have gone either way at the end and we were just lucky to get that really good line to score. It was a great team effort and hopefully we can build on that.

“Now there is relegation, it is crucial that you get off to a good start. We wanted a bonus-point win and we got it.

“We have got massive games coming up and we are going to go through weeks where things don’t go our way and we will be under the pump. As long as the boys show the character which they did in that last five minutes, then for me, that is success.”

Loughborough’s Ollie Kilgallon: “It is always a tough one to lose a game in that fashion, but that is what BUCS rugby is all about. It is hard and fast and that is what everyone wants to see, but it is a shame we didn’t get the result at the end of the day.

“We have got a massive game next week against Exeter so I am sure all the boys will be up for that. Now we know what we have got to work on so we will bring our ‘A’ game next week.”